Building on its existing STEAM program, F.D. Moon Academy captures donations to secure the building of a robotics program. 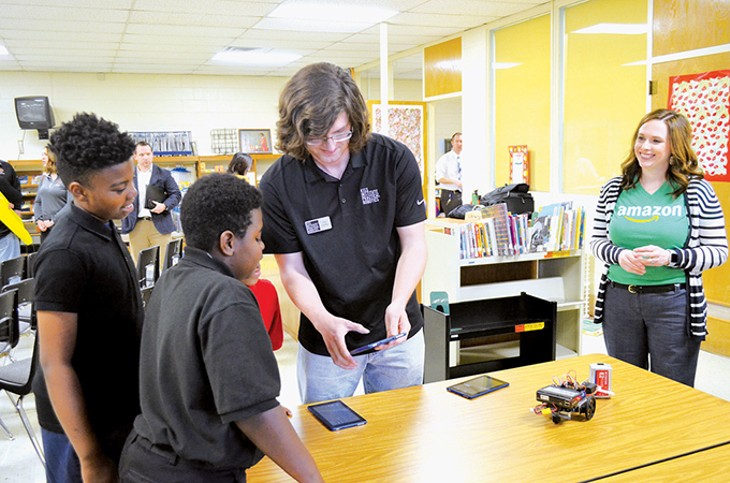 Introduced as a learning tool to get students engaged in technology and engineering, robotics has captivated students of all ages with its hands-on learning and friendly competitions. In Oklahoma’s urban and rural districts, robotics has become the norm.

Three years ago, F.D. Moon students began participating in an after-school STEAM (science, technology, engineering, art and math) program through the City of Oklahoma City’s Strong Neighborhoods Initiative program. This spring, students will begin meeting in the brand-new STEAM lab, a large space that operates as a learning lab revolving around STEAM curriculum.

“We’ve got the lab. We’ve got the after-school program,” Kellert said. “Now, with robotics, we have all the aspects.”

Educators back Botball and other robotics programs because they provide students with challenging learning opportunities and prepare them to be the problem-solvers of the future. Kellert agrees. He has seen Botball in action as a father, cheering on his daughter and her teammates. Botball gives students more than just engineering and technology lessons. It provides opportunities for students to strengthen their leadership skills, sharpen their communication, learn teamwork and experience the highs and lows of competing.

“If one part of the code is wrong, the robot ends up across the room,” he said. “There is communication. There are students working towards a common goal. I’ve watched, as kids complete a challenge, they’re yelling just like anytime someone makes a touchdown or a goal.”

Some F.D. Moon students are already beginning coders. In the fall, fourth- and fifth-graders experienced computer coding lessons through the after-school program. This semester, second- and third-graders took their turn.

The commitment among teachers and administrators to emphasis STEAM education caught the eyes of Amazon, which operates a sorting center in Oklahoma City.

“Being a technology company, we look for opportunities to reach the next generation of technology employees,” said Erin Shipp, a site leader at Amazon Oklahoma City. “We focus on STEM education. F.D. Moon was interested in the Botball program and extending technology to its students and in creating a lab. Amazon felt like this was a really good opportunity to give back to the community and the students of F.D. Moon.”

With six Botball kits, F.D. Moon is seeking to form up to six teams next fall. Ashton Stewart, assistant principal, will oversee the program by recruiting teachers to serve as coaches and placing interested students into teams.

Teachers will begin to introduce the kits for students to get a taste of next year’s program.

Kellert said students’ interest in STEAM is rising and he views the new Botball program as taking STEAM education to the next level.

“They think robots are cool,” Kellert said of F.D. Moon students. “They think building is cool. I don’t think they yet understand the challenges and competition aspect that I’ve seen as a dad.”