EÔTÉ Coffee Company spreads a message of outreach and goodwill. 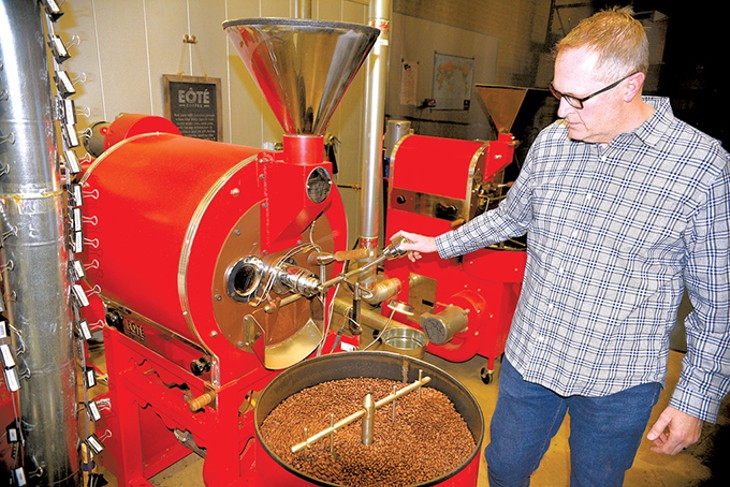 The flag hanging high in the EÔTÉ Coffee Company roasting facility, 416 NE 48th St., depicts the globe, but not in an American-centric manner that permeates classrooms across the United States.

Getting inspiration from Acts 1:8, “EÔTÉ” is an acronym for Ends of  the Earth.

“Being Americans, we’re really good at being the centers of our own universe,” said founder Todd Vinson. “It’s a good reminder for perspective and to focus on other people. How can we bring out the best in other people and call them up to highest possible good? You can do that by spending time with somebody.”

EÔTÉ has become an outreach and fundraising arm for Vinson’s Willow Springs Boys Ranch in Chandler, which works to mentor young boys going through family crisis.

It adopted the French caret or circumflex accent over the “O” to symbolize the safety provided at the home at Willow Springs, which housed the beginning of the EÔTÉ operation in 2012. The idea was long simmering, like a pot of coffee at the end of the day, which Vinson realized was always at the center of life’s most important decisions.

“Everything I’ve done of significance where life decisions are made seemed to happen at a table over a cup of coffee,” Vinson said. “Am I going to marry this girl? Am I going to pursue this career? It’s been while seeking wisdom from folks, usually over a few cups of coffee.”

While on a business trip to Albania, Vinson was intrigued when the conversation with his traveling partner turned to his personal home coffee-roasting hobby.

“My head goes on a swivel,” Vinson said. “Every free moment on that trip for about a week, we talked about coffee-roasting.”

One of the first things Vinson did when returning home was to buy a desktop roaster, and one turned into three once he realized the difference between a fresh roast and a national store-bought brand that was roasted months before hitting the shelves.

Out of the garage at Willow Springs, Vinson bought a 3-kilo coffee roaster and began selling fresh roast at local farmers markets under cottage food laws.  Vinson established EÔTÉ as the de facto for-profit arm of Willow Springs shortly thereafter and moved into a warehouse space just off Lincoln Boulevard, a few miles from the state Capitol, in 2016.

At the beginning of 2018, $1 for every bag of one of EÔTÉ’s 10 varieties of coffee sold either retail or wholesale goes back to support Willow Spring Boys Ranch. 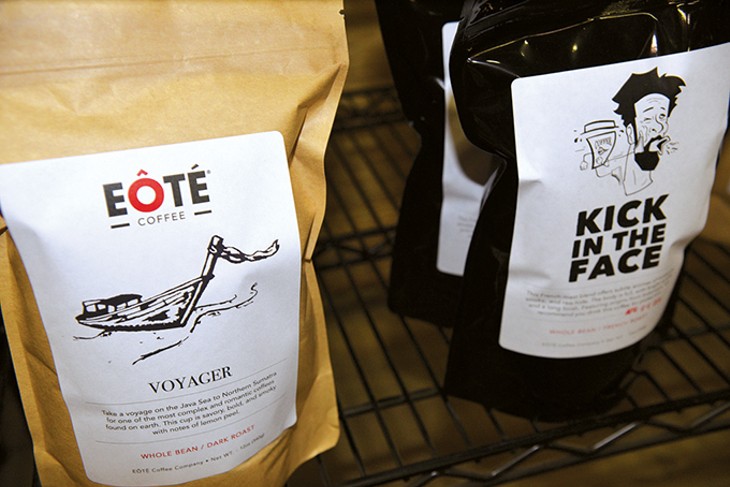 Vinson received an undergraduate degree from the University of Oklahoma in psychology and a master’s in children’s and family relations. Vinson’s uncle donated 180 acres in Chandler to Vinson to help establish the boys ranch in 1996, and the first guests moved into the home, which has a capacity of 12 people, in 1998.

“It’s kids in need of supervision or in a family crisis, usually circumstances not of their own doing,” Vinson said. “Maybe [there has] been a death in the family or substance abuse issue or a legal problem.”

Willow Springs focuses on preventative care, working with children and their families to provide one-on-one care and emotional training.

“You don’t have to hoard clothes or food [like in a state-run group home facility],” Vinson said. “They’ll graduate from high school and get their spiritual needs met.”

A few of the program’s recent graduates have gone on to get jobs with some of EÔTÉ’s more than 30 retail partners, which includes Interurban Restaurant Group, 84 Hospitality Restaurant Group, Hungry Town Concepts and Sunnyside Diner, among others.

EÔTÉ does about 80 percent of its business through its retail partners and the remaining percentage through its website and online wholesale through sites like Amazon.

“When I’m out selling, we like to align ourselves with the best. It is places that replicate integrity and greatness. It sounds kind of snotty, but you’re only as strong as our weakest link, and our website refers to them as friends because that’s what they are to us,” said Patrick Will, EÔTÉ’s director of business development.

At the warehouse, they are not licensed to sell coffee, but customers can pick up prepaid orders, drop by for a free tasting every afternoon between 2 p.m. and 4 p.m. or receive barista training. There is a tip jar that goes back to Willow Springs.

On a midweek morning at the end of April, there was a steady stream of customers coming to pick up retail orders or just dropping by to shoot the breeze.

"Everything I’ve done of significance ... seemed to happen at a table over a cup of coffee." — Todd Vinson tweet this

A few retail clients had stopped in for barista training with Tracy Allen, president and founder of Kansas City-based Brewed Behavior. Allen, also president of Specialty Coffee Association, developed the coffee blends for such corporations as American Airlines and Chick-fil-A and was even commissioned to brew coffee for Pope Francis when he visited the United States in 2015.

Allen was introduced to Vinson when he was still roasting at Willow Springs, and the two have maintained a friendship as EÔTÉ has expanded.

“I liked his mission,” Allen said. “They’ve had a lot of growth in the last two years, and I like to be a reference when he needs stuff. I provide some training out of the goodness of my heart because of Todd’s heart.”

EÔTÉ has grown from garage roaster to local facility in the past two years, and Vinson has a goal of making a regional imprint before hopefully going national.