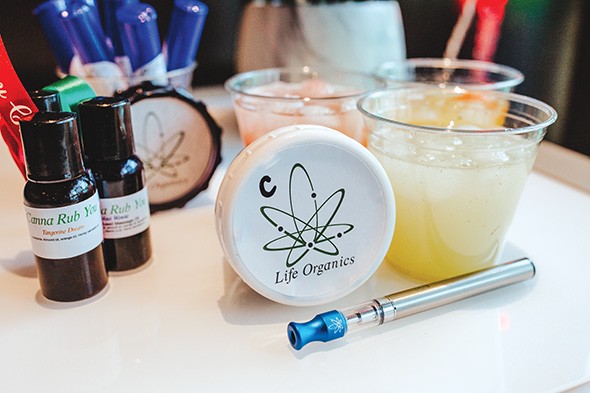 University of Oklahoma’s Campus Corner in Norman just got a lot more chill thanks to the new kid on the block.

Life Organics Cannafé, 588 Buchanan Ave., opened its doors in late October. The quiet cafe boasts of being the only CBD-infused cafe in the state, co-owner Jim Castor said.

“We just love the Old World Amsterdam theme. We were going to do it under the name Grasshopper at one point, then ‘Cannafé’ popped up. Nobody knows what a Grasshopper is, but Cannafé is like, ‘I get it.’”

The Grasshopper is a legendary “coffee shop” that stopped serving cannabis in 2014 due to rezoning laws.

“We just came up with some great flavors for the drinks, and said, ‘Man, you know, our extracted oils could go in coffees and lattes and got some snacks going,’” he said. “So we kind of go with a microdosing philosophy rather than it being really intense. We have several different kinds of cookies and brownies, and then we have an ice cream sandwich and ice cream with infused caramel or chocolate sauce on there. Those are kind of the dessert items. And then we have a pasta salad that we infuse the oil, a hemp butter and jelly sandwich that’s like the best peanut butter and jelly sandwich you’ve ever had. It’s got pumpkin seeds that are ground up. Everything is made from scratch as well. Our manager’s task is to craft a few new items on the actual food side, so we have a salad right now, we have an avocado toast.

“Depending on who you are, there’s really no dramatic feeling, but you could, if you put it all in one and you had three, it would be a lot. Nobody necessarily says ‘I feel that,’ but you get the cannabinoids into your system, which is really our goal, to replenish that starved endocannabinoid system.”

Originally from Wichita, Kansas, Castor has started several businesses and his area of study is criminology. His first master’s degree thesis was on the detection of cannabis by devices such as breathalyzers. He and partner Joel Jacobs attended the same high school.

“My partner is a Harvard biochemist and taught at Harvard for a few years and then got into the cannabis space. We’re went to high school together and got together a couple years ago. And he’s like, ‘Yeah,’ you know, ‘Let’s do this, ’” Castor said. “I was in Boulder for the summer and saw that the law changed in Oklahoma — I actually live in Dallas — and came here and read the law on the plane and said, ‘Hey, Joel [Jacobs]. Why don’t you meet me in Norman?’ You know, it’s kind of a thought center in Oklahoma with OU and Oklahoma is offering a researcher’s license, which is cutting-edge. No one in the country, no state has done that. They haven’t actually released that yet, to actually allow anybody to do it, but they have it in the law that there will be a research license where a company can actually be licensed to research cannabis and its effects, and Joel is a PhD in biochemistry. He was like, ‘Oh, this is awesome. Let’s do it. So we’ve got a culivation, a processing, a lab license and then two medical dispensaries, and then the Cannafé here. Up until about five years ago, I was like he had medical marijuana; whatever, right? Good excuse to get high. And then they just kept doing study after study, and there have been more than 10,000 studies now.”

There will be no on-site consumption of THC at the Cannafé. That still leaves a plethora of products like CBD pre-rolls and vapeable product, not to get you high, but to calm you down.

And more products will be available from Life Organics as research and development continues.

“I’ve heard it said that THC covers about the last 20 percent and the other cannabinoids including CBD cover the other 80 percent. Cannabis or marijuana has about 150 known cannabinoids in there, and THC is one of them, probably the most prevalent, then CBN, CBG, just a whole host of them that we know some things about but not very much about yet,” Castor said. “As hemp becomes legal this week, we believe, and as cannabis becomes legal this year, we believe more and more research will go that direction, where we can learn more and more about those other, lesser-known and less-plentiful cannabinoids that are in there. CBN, for example, will put you sleep like Valium puts you to sleep and so isolating that in the extraction process, when we extract, we can isolate specific cannabinoids.”

Castor said that eating and drinking cannabis and its byproducts are the most efficient way of consumption.

“That’s probably the best way of getting it into your system, as opposed to smoking it or vaping it,” he said. “Smoking, especially, a lot of it is burning in the process and heating at such a high temperature that it degrades or it burns up completely, whereas when you ingest it, you’re taking that oil in and you’re using 100 percent of it basically. Very little of it is destroyed in the digestion process, and then it goes where it’s needed. The receptors and the endocannabinoid system is located all throughout your body.”

Brightly lit during the day and awash in low green light at night, Cannaf é is also hosting live music.

“There’s so much talent here in Norman,” Castor said. “The manager we hired was in a couple of bands here and knows everybody, so that really helped us facilitate a great atmosphere.”

There is often live music on weekends, and midweek music on Wednesday nights. The shows start at 7 p.m. and are free. Lindsey Cox, Kate Carmichael, Cedar Micaelah and others will be performing in January.

“It is a totally chill place to come and hang out for the students and for the town. We love it,” Castor said.