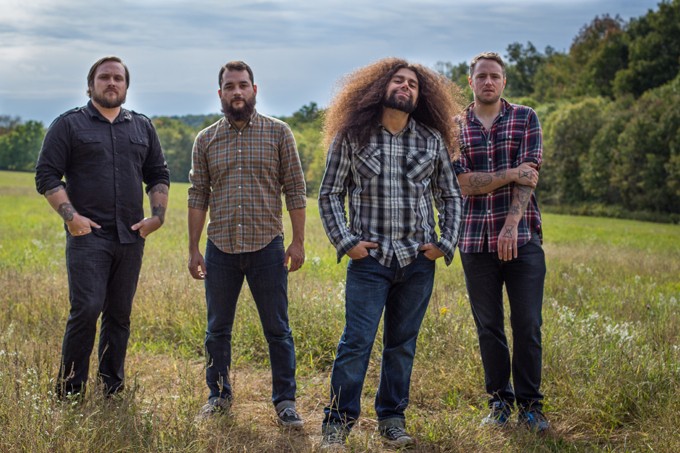 Coheed and Cambria has fans from here to Mars.

The New York progressive rock act has built a large and dedicated following from a series of conceptual albums based on The Amory Wars, a science-fiction series initially dreamed up by Coheed vocalist, guitarist and keyboardist Claudio Sanchez as a metaphoric mask that made confessional songwriting and storytelling more comfortable.

The band’s last album, The Color Before the Sun, was released in October. It is Coheed’s first departure from the Amory Wars concept and has a brighter tone compared to much of the act’s previous work.

Josh Eppard, Coheed’s drummer on all but two studio albums, told Oklahoma Gazette that while the new project is not necessarily indicative of what Coheed’s music will sound like in the future, it was a refreshing change of pace for a unit that has performed together for several decades.

Eppard left Coheed in 2006 to deal with his own drug addiction and rejoined the group in 2011.

In a recent Gazette phone interview, the drummer discussed fans, new music and what Coheed means to him.

Oklahoma Gazette: Coheed and Cambria recently returned from a tour in Europe. Do you still get excited when you leave the country for tour?

Josh Eppard: It’s an extremely exciting opportunity. We’ve done it so many times now, but it’s certainly not old hat. Every time, it’s new and exciting. ... It’s life-altering humbleness that comes from it. You’re humbled by the fact that you’re so far away from home and there are these people here who appreciate what you do. It’s incredibly gratifying and amazing.

OKG: Coheed and Cambria is known for having a very passionate fan base. Why do you think that is?

JE: In a perfect world, I’d like to think that it’s because Coheed and Cambria has struck a chord and spoke to people in a way that was special to them. That’s the greatest honor that any artist or any band could ever have. When we were kids living in a van ... we were like, “Get in the van, we’re going to go see the world!” ... We felt like what we were doing was really special and it spoke to us, but there’s not a band out there that doesn’t feel like what they’re doing is really special.

OKG: Does making the Coheed music speak to you in any way? You’ve had experience in and out of the band.

JE: I don’t know if I ever would have gotten sober if it wasn’t for [2007’s Good Apollo, I’m Burning Star IV, Volume Two: No World for Tomorrow]. I think Claudio, in a lot of ways, was speaking to me through that record, and it forced me almost to look at my life. To say the songs spoke to me is the understatement of the year because they spoke to me in such a powerful way. Not only did I love the songs and I love that record, but a lot of the times, he’s speaking about me directly, so it forced me to look at things from his perspective. Those songs are extremely important to me, whether I played on them or not.

OKG: Do you remember when you realized The Color Before the Sun was going to have a different approach for the band, or did you realize that all along?

JE: I don’t know if I can pinpoint the exact time, but before we recorded that record, we all got together in Claudio’s basement in his house ... where he’s got tons of demo recordings and written a lot of stuff. It’s this beautiful house not in the middle of nowhere, but it’s pretty secluded. ... We got together just as a band and started playing the tunes, and I was like, “OK, this is Coheed, but this is definitely not nearly as dark.” There are dark elements there, but it’s definitely not quite as dark. ... I think it’s amazing if, on your eighth record, you can kind of turn the page and do something that feels fresh and not make the same record.

OKG: Does it feel different to you in any way to play the new stuff?

JE: Any time you have a band, they love playing their new stuff. You know why? Because they haven’t played it 10 gazillion times, so it’s fun again and it’s fresh. You have to pay attention. ... Any time you have a new record, there’s like a youthfulness in the performance that, dare I say, you don’t always get with some of the older songs. I love “A Favor House Atlantic” I love playing “Welcome Home,” but the fact is we’ve played those songs a gazillion times. Songs like “Island” or “Eraser” or “The Audience” or “Peace to the Mountain” off the new record are still fresh and exciting, and I think that translates to the crowd. …

This record was a curveball. I think it’s safe to say at this point and this juncture in Coheed and Cambria’s lineage, “Expect the unexpected.” If you think we’re about to do something, we’re probably going to do the opposite.

OKG: Does it feel different being in the band now than it did back in the early 2000s? There have been a number of changes.

Somebody said to me once, “It’s up to you whether this sucks and is a total drag or if it’s amazing.” … At some point, thank God, it registered with me and I understood that it’s up to me.

Coheed and Cambria with Saves the Day and Polyphia