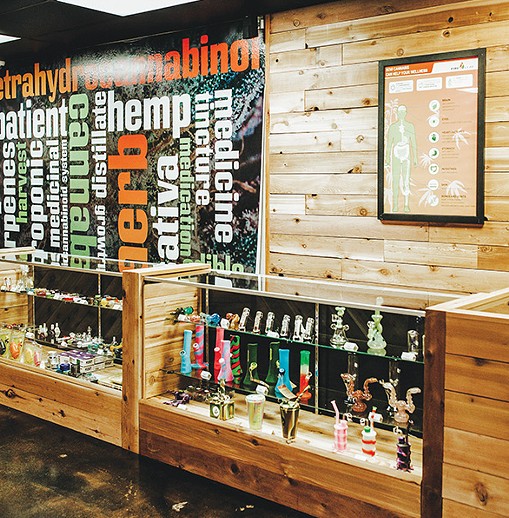 Oklahoma medical marijuana dispensaries have to have patients to buy products in order to keep their doors open, patients must have doctor recommendations and pay the license fee before they can purchase them and the two are coming together in patient drives that mutually benefit both parties.

A fair number of local dispensaries have had doctors onsite for convenience and reduced fees. A handful have offered to cover the cost of the doctor’s appointment. But Fire Leaf is taking it a step further and offering patients a chance to recoup the licensing fee in the form of coupons.

That leaves the patient with a $4.30 price tag in credit card service fees for their two-year license.

“My perspective on it is that there are a lot of people out there making a lot of money, trying to get a lot of dollars from people just to obtain a medical card,” owner Tyler Doolittle said. “That’s not what we’re trying to do. What prompted us was hearing all the complaints from people saying, ‘Yeah, we want to get our license, but it’s too much money.’ That’s what prompted us, seeing a lack of affordable ways of obtaining your medical card. That was kind of our initiative there. It was kind of overwhelming, the outcome.”

Fire Leaf’s first patient drive was held Jan. 5 at the south Oklahoma City location, 7876 S. Western Ave. Initially billed as a first-come, first-serve opportunity, the demand prompted them to instead schedule appointments in blocks. Slots for a second event on Saturday have already been filled. A third, private date will be arranged to clear the rest of the overflow before they start with a fresh slate in February.

The parking lot and store on that Saturday morning were packed. Regular patients arrived to pick up their medicine while dozens waited their turn in line to see the doctor, who had set up a mobile office in a trailer in front of the dispensary.

Only a handful had not gotten the notice that it was no longer on a walk-in basis.

“I have a doctor friend who’s kind of semi-retired, and he said, ‘Hey, it sounds like a great cause.’ And so we asked him to come out and are paying him a little bit for his time, but we’re seeing all the patients that we can,” former store manager Tim Cable said. “Obviously, he can only see about 10 an hour. ... We gave them an hour slot, 10 people in an hour slot, and they’re coming all through the day, so they’re here maybe 30 minutes tops.”

“If it wasn’t for him, we couldn’t have done any of this,” Doolittle said. “The landlord’s already called and complained, as it was huge. All the other stores were like, ‘There were so many people out there, we couldn’t have places to park.’ It was such a good thing that it caused problems. When that happens, you know you’re disrupting an industry.”

“We’re paying the doctor, and they will pay the state fee, and we’re giving them $100 in coupons to cover their state fee when they get back, so essentially, it’s going to cost them nothing,” Cable said.

Patients who attend Fire Leaf’s drive are given four coupons for $25 off a purchase of $75 or more.

“There’s a lot of doctors out there charging like 300 bucks, and I’ve noticed a lot of those doctors are like the pill mill doctors, the ones that spread this opioid, disgusting epidemic all over,” Cable said. “Me? I didn’t want to send anybody to that; I didn’t want to deal with those people.”

“The people at Green Hope Wellness — Renee — they’re doing it for the right reasons. ... I don’t want to be one of the profiteers on it,” Cable said. “Now, we’re going to be making money selling our product and stuff, but the truth of the matter is that a lot of people, they need this prescription. They’re trying to come off opioids, and I’ve seen it firsthand in my family, how marijuana can help them stave off the coming down part of an opioid addiction. There’s good things here. I have a lot of people saying, ‘Oh, it’s a bunch of potheads.’ I’m probably one of those guys. I’m a concert promoter, and I’ve been smoking pot most of my life. Maybe I’ve got my own way of medicating or whatever, but there are real people who really need this. One of the first ladies in here is handicapped. It’s not all just a bunch of potheads.”

Fire Leaf is currently constructing a more central location in Stockyards City at 2501 SW 15th St., which has more parking. It is expected to open this spring, and Doolittle said patient drives will shift to that location once it does.

Due to a unique zoning location, it will also have a kitchen for cooking classes and a glass window through which people can see the cannabis growing.

The learning curve has been huge for the first patient drive, but Doolittle said they were able to see 83 patients.

“But that wasn’t 10 percent of the demand,” he said. “There’s time restraints on it. You know, the doctors have to have time to see a patient. ... We’re going to have to figure out a way to speed up the process.”

Fire Leaf plans to continue the patient drives regularly throughout the year and taking care of the doctor’s visits for patients. They have not decided how long they will offer the coupons to cover the $100 application fee.

“I think, overall, it was a success,” Doolittle said. “But some of the neighbors were complaining, and some of the customers were complaining that they were upset that they couldn’t get taken care of first. So we’re going to try to figure out a better way to maybe do it a little bit functional that works for everybody. But it really worked, and we’re planning on doing a lot more. .... There’s room for improvement. That’s what we want to do; just get it done and move forward and make some happy patients out there.”