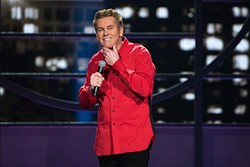 The Florida-born comedian performs accessible shows that play just as well to 20-something hipsters and 70-somethings with hip replacements, and fans know Regan’s name is synonymous with funny.

“It’s always been a challenging thing for me to deal with, the whole notion of being ‘clean,’” said Regan, whose stand-up routines blend sharp-witted sarcasm with observational and self-depreciating humor. “Even though what I do is clean, when people hear that word, they attach a connotation to it that’s not especially something I’m interested in.”

He recently spoke with Oklahoma Gazette in the lead up to his Oklahoma City show 8 p.m. Dec. 3 at The Criterion, 500 E. Sheridan Ave.

Audiences who haven’t seen or heard him perform might confuse his dearth of profanity with that being the point of his shows, he said.

“Like, ‘Look at this guy riding in on a big white horse, trying to show us a better way to do comedy,’” Regan said. “I like all kinds of comedy. There are comedians who are filthy that I love. It’s not a better way. It’s just a different way.”

Regan’s parents are still alive, and as a father, he knows what it’s like to worry about what his kids are listening to.

Make no mistake, though — he’s hilarious. Jerry Seinfeld, Bill Burr and Jimmy Fallon call him one of their favorite stand-up comics. He also has appeared a record 28 times on Late Show with David Letterman.

Even for an experienced performer, it was intense, Regan said.

“Usually, when you do a one-hour special, they tape two shows, so if you flub a line or a joke works better in one show than another, they can edit it,” he said. “When you’re going out live, there’s no such safety net.”

That challenge was part of the reason he wanted to do it, but that didn’t make it any easier to do.

“It was a lot of fun, but it’s kind of like crossing a high-wire between two tall buildings,” Regan said. “‘That was great! Are you ready to come back?’ ‘Uh, no; I’m fine over here! I’m just going to enjoy being on this tall building for a while.’”

Even though it was broadcast live, the special still required him to go into the editing booth because Comedy Central wanted to re-air it with more commercial breaks. The live show had only one commercial break.

“I did the special on Saturday night and had to go back in on a Monday and cut out 20 minutes so they could put more commercials in,” he said.

Regan has worked in the industry for more than three decades and left college his senior year to perform stand-up.

“I say ‘left.’ I dropped out,” he said. “When I told my parents I had ‘left’ college, they had some more questions. Like, ‘Does that mean you’re coming home with a sheepskin?’”

He took a job at a Fort Lauderdale comedy club, where he was sometimes the cook, sometimes a busboy and, for a few minutes each night, a comic.

“I would do five or 10 minutes a night. After the show, the people would all talk to the professional comedians,” Regan said.

When asked what he did, Regan told people he was a busboy until another performer pulled him aside and told him nobody else is going to decide when he’s a stand-up comic.

“He said, ‘Why not just tell people you’re a comedian? That might help you on your path,’” Regan said. “I wish I could remember his name, because it was a pivotal moment.”

When Drozen, who produced comedy albums with Richard Pryor, reached out to him, it was a big deal.

“I’ve always appreciate him for that. Sometimes, I check the iTunes comedy chart and that album [1997’s Brian Regan Live] is in the top 10 or top 20,” he said. “That really helped move things along for me. The only way to hear my comedy prior to that was by coming and seeing my show. Suddenly, I had people come out to my shows with that CD in their hands. That’s one powerful little disc.”

His comedy translates well in recordings, but to really experience the show, audiences should see Regan perform.

Onstage, he delivers a physicality that sometimes even surprises himself.

“I don’t even think about the physical part of it. When I come up with a bit, it’s about the words, and then, when I’m doing it onstage, a lot of my bits are vignettes. They’re me and another character, like me and an eye doctor or me and a microwave,” he said. “The only way for the joke to work is to act it out. It’s just something I kind of do, and then I’ll see it; I’ll do [The Tonight Show Starring Jimmy] Fallon and that’s the first time I’m ever seeing it. I’m like, ‘Wow. I put a lot of effort into that.’”