Comedian brings his rants, wrath to The Boom 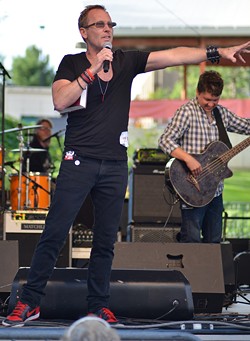 Del Shores has a warning for those who plan to attend his performance at The Boom: “The censors will be absent, so if you are easily offended, stay home.”

Shores, comedian and creator of the movie-turned-television series Sordid Lives, brings his new show SINgularly Sordid to The Boom, 2218 NW 39th St., for one performance Sunday at 8 p.m.

SINgularly Sordid marks the first time Shores has appeared in Oklahoma in a couple of years. The new show runs the gamut from dishing on celebrities to discussing what it’s like going back into the dating world as a 50-something gay man.

“I have some new letters I will read onstage to some of my haters, including one to Oklahoma’s very own Rep. Sally Kern,” Shores said.

While he’s crossing the country with his new show, Shores is also getting ready to go into production on a sequel to Sordid Lives. The original movie debuted in 1999 and quickly become a cult classic. It included Beau Bridges, Delta Burke and Olivia Newton-John, among others. A spinoff TV series followed and proved to be the final role for Oklahoma’s own Rue McLanahan.

“Fans of the original movie will be pleased to know Kirk Geiger is returning as Ty,” Shores said. “He created that role and will always be Ty to me. There are a few other changes as well. Dale Dickey will replace Beth Grant in the role of Aunt Sissy, and I am thrilled to be working with her. She is one of the best actresses in America.”

Olivia Newton-John was unable to reprise her role as country singer Bitsy Mae because of scheduling issues.

“Olivia is a dear friend, but she has her Vegas engagements, touring, her Cancer and Wellness Centre in Australia and is simply not available,” Shores said.

He grew up in rural Texas and said he is no stranger to homophobic attitudes. His father was a Southern Baptist minister, so he grew up learning the Bible from cover to cover. He says that prepared him for when religious zealots spew anti-gay rhetoric.

“They have cherry-picked scriptures for years, and many of us with biblical knowledge challenge that,” Shores said. “Come to my show if you want to hear more of my rants. And if you want me to marry you, I’m ordained.”