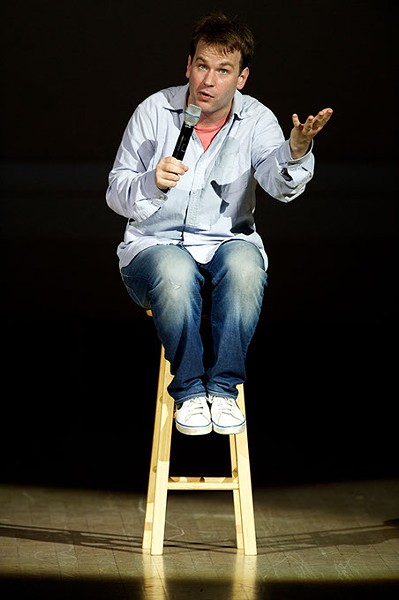 Typical career paths do not exist in modern standup comedy, but even at a time when comedians can rise through the ranks via any combination of YouTube, club work, podcasting, improv and Netflix specials, Mike Birbiglia’s career is exceptional.

Thank God for Jokes, which Birbiglia performed for four months in an off-Broadway production earlier this year, strings a series of relatable and ridiculous stories into a performance that looks at the nature of what makes people laugh. Jokes, Birbiglia says in the show, are “just your side of the story.”

“Birbiglia is hiding some serious ideas beneath the laughter,” Neil Genzlinger wrote in his Feb. 12 New York Times review of Thank God for Jokes. “This isn’t just an enjoyable performance; it’s also an admirable piece of writing.”

At 16, Birbiglia saw comedian Steven Wright perform his uniquely absurdist set and was inspired to make a career in standup. While Wright specializes in bizarre one-liners, a typical Birbiglia joke is a multi-liner. A few years later, Birbiglia began performing standup while studying at Georgetown University. His early success led to a Comedy Central special and a pilot for CBS, which did not air. The experience of making the sitcom emboldened him to go for something more fulfilling.

But first, Birbiglia had to jump out of a second-story window.

In 1998, Birbiglia discovered that he had rapid eye movement (REM) behavior disorder, a condition that causes people to physically act out their dreams while they’re sleeping. It was something he lived with but did not seek treatment for until January 2005, when a life-threatening dream took over during an overnight stay in Walla Walla, Washington.

“I have a dream that there is a guided missile headed toward my room and there are all these military personnel in the room, and I jump out of bed and I say, ‘What’s the plan?’” Birbiglia wrote in a 2013 piece for The Guardian. “And they say: ‘The missile coordinates are set specifically on you.’ And I decide in my dream and, as it turns out, in my life, to jump out of my window. There are two important details here. One is that I was staying on the second floor. Two, the window was closed. So I jumped through the closed window.”

Birbiglia sought treatment from a sleep specialist after doctors pulled the glass shards out of his legs. The event transformed his career. After he refined the incident into standup material, This American Life used the story in a 2008 episode titled “Fear of Sleep.” Birbiglia became a regular on the popular public radio show and adapted the story into a one-man show, Sleepwalk With Me, which formed the basis for his 2012 directorial debut, which became a critical success.

This summer, as he toured Thank God for Jokes in preparation for an upcoming Netflix special, Birbiglia debuted his second film, Don’t Think Twice. A look into the backbiting, highly competitive world of improv comedy, the film stars Birbiglia alongside Keegan-Michael Key and Gillian Jacobs. Birbiglia is expected to film Thank God for Jokes this month, but the best way to thank Birbiglia for his jokes and stories is to do it in person.