Comedian W. Kamau Bell is as much a truth-speaker as a joke-teller 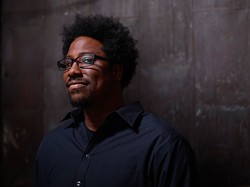 Best known for his FX talk show Totally Biased, W. Kamau Bell has made a name for himself as a sociopolitical comedian that blazes new trails through well-trodden territory by treating hot-button issues like race, gay rights and women’s issues as equal and inseparable.

For his Oh, Everything! Tour, Bell is tackling subjects like homophobia, gentrification, his mixed-race kids, social media, guns, why his God looks like Denzel Washington with dreadlocks and racism.

“Kamau is very nearly peerless. His humor is sharp and real without being pedantic, preachy or safe,” said OKC Comedy partner Brad Porter. “It is rare to find a comic that can deal with ‘dangerous’ topics without being offensive for no reason or draining all of the fun out of the bits. He is that rare comic.”

“Comedy is for fun, but in the right hands, it can expose hypocrisy, raise awareness and change minds,” Porter said.

Bell amended that comedy is a great way to communicate any idea.

“When people are laughing, you know they’re paying attention. That’s why every politician tries to be a little bit funny and they get in trouble when they try to be too funny,” he said.

Bell didn’t set out to be a comedian known for being political- or issue- oriented.

“I like to talk about the things in our society that bind us together and tear us apart. A lot of that stuff ends up being political because it’s identity politics,” Bell said.

“I feel like people look at me and say, ‘He’s a black guy with opinions, so he’s political.’ Yes, I happen to be black. Yes,

I happen to have opinions and questions. And comedy is my way of figuring that stuff out.”

Bell got his start doing stand-up in Chicago during the ’90s when the scene there was at a low point.

“There was one comedy club, and they were like, ‘We have all the comics we need.’ So there was no real way to move up except to go on the road, and I knew I didn’t want to do that,” Bell said.

Eventually, Bell left the Windy City behind for the City by the Bay (San Francisco), where he continued to struggle for a while.

In 2007, Bell put up his first solo show, The W. Kamau Bell Curve: Ending Racism in About an Hour.

“It was a topical show about racism. I wrote it, put it in a theater and had my friends help me produce it. That was the place were I really got to really push myself creatively and work on the ideas that I was interested in,” Bell said.

In addition to his FX series, Totally Biased, which ran for two seasons, he was a founding member of the comedy collective Laughter Against the Machine and has had numerous television, radio and podcast appearances.

Bell is embarking on the Oh, Everything! Tour to refine material for a new stand-up special that he hopes to shoot next year.

“I want people to experience the difference between a live performance and television,” Bell said. “I can step off stage and hug people if I need to, which I do pretty regularly.”

Unfortunately, going on tour also has its downside. Bell will be leaving behind his newborn daughter. The tour was planned before his wife got pregnant, so he has done his best to adapt, taking breaks for Thanksgiving and Christmas.

“It’s not the best, but unfortunately, being a stand-up comedian is a little bit like being in the military. When you gotta ship out, you have to go,” Bell said.

“That’s why I talk about my kids a lot in the show. I mean, I left my kids for you people. So, if you don’t come see the show, you hate my children! And you’re hating mixed-race children, which is kind of like hating the future.”

Oklahoma comics Cameron Buchholtz and Zach Smith are set to open for Bell.