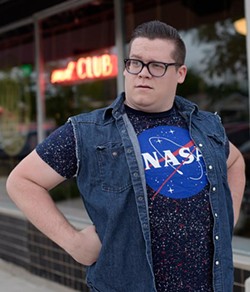 One of Oklahoma City comedy’s best-kept secrets is ready to take its sneering rib-jabs and over-the-top bravado into the hotly contested ring of regular local entertainment. Comedy Fight League (CFL), an often-outrageous series of roast battles between local comedians, got its start in 2015. The swaggering show pays plenty of homage to professional wrestling, intentionally stoking dramatic “rivalries” between opponents and sometimes placing comedically high stakes on the outcome of matchups.

CFL’s former home was Dave & Buster’s on N. May Avenue. Comedian and CFL host/commissioner Josh Lathe said the show became popular in comic circles but never found a wider audience partially because the venue was unconventional for a locally produced show.

Those who have seen Lathe’s stand-up are likely not surprised by his involvement in the flashy roast league. The comedian’s stage show is known for its bursts of high energy and comedic pomp. That attitude can likely be traced back to a long-standing obsession with professional wrestling.

“When I was a kid, it was all I’d ever think about,” Lathe said.

Merging the worlds of roast comedy and professional wrestling is not the most abstract concept. Many wrestlers give essential roasts of their opponents in concocted promotional interviews that serve to enhance drama and establish storylines before big matches.

“We’re cutting promos; we just do our talking with roast jokes,” Lathe said of his CFL companions. “That’s our fighting, which is way more approachable than working out and getting muscle.”

Talking a big game is not something Lathe developed after starting CFL. In fact, it is the thing that got him into comedy in the first place. Lathe remembers flirting with a woman he liked and telling her he did stand-up comedy when, in fact, he had never even attempted it.

Soon after, he attended his first open mic at The Looney Bin comedy club — a set he said was a complete disaster. Still, comic and comedy organizer BradChad Porter approached him afterward and invited him to come to an open mic the next week at Othello’s Italian Restaurant in Norman. Soon, Lathe was an open mic regular.

He came up with the idea for CFL after seeing a similar roast show in Austin, Texas, called Spite Club. When he returned to OKC, Lathe approached Porter — a similarly avid wrestling fan — about his idea for a wrestling-themed roast show. Porter loved the idea, and they soon secured Dave & Buster’s as a host location.

CFL became popular among comedians partially because it presented them with something different from the standard open mic. Comics could sharpen their writing within the creative constraints of CFL. Playful jeers and roasts were something that already existed; Lathe just gave them their own format.

“Going to an open mic is not necessarily fun,” he said, “but sitting in the back of an open mic and making fun of each other … that’s the best part.”

CFL most commonly deals in the traditional joke format, but roasts can sometimes veer into the territory of video clips or slideshow presentations. Lathe welcomes and encourages any form of creativity.

“Anything short of lighting a fire on stage, I’m in favor,” he said.

It is important to remember that CFL is a legitimate competition despite its professional wrestling themes.

Impartial guest judges score competitors and name winners in each matchup. No outcome is predetermined, even in battles in which the loser might be “banished” from CFL competition. Narratives can always be adjusted later to work comics back into the fold. Lathe sets the stakes high to keep the audience invested.

“When [the crowd] hears a sick roast joke, we want oohs and ahhs,” he said.

Last year, winners in certain matchups fed into a larger CFL playoff tournament. Going forward, Lathe wanted to ditch the bracket format in part because orchestrating the tournament turned into a logistical nightmare.

“This year, I want to focus more on comics calling each other out and me helping to make some of the matchups,” he said.

While CFL has established a reputation as some local comics’ favorite comedy show, the new VZD’s location might help the show take root with a loyal following of non-comedians.

No matter who latches onto CFL as the show continues, Lathe insists the league’s biggest fan will always be himself.

“I’m more excited than anyone else who steps near these things because I think roast jokes are like love notes written with middle fingers,” he said. “It’s just your best friends saying the worst things they can think about you, and nothing to me is more fun.”

The Return of Comedy Fight League