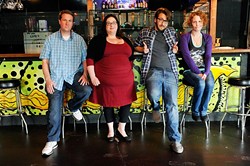 The only way to keep laughing is to keep living.

“Suicide isn’t funny,” said comedian Melissa McGinnis. “Life is funny. And in hindsight, things like that can be funny.”

In an effort to keep their potential audience alive and laughing, McGinnis and fellow comic Jackson T. Curtin are hosting the Comedy Cares Benefit Showcase for the National Suicide Prevention Lifeline on Saturday at Sauced on Paseo, 2912 Paseo Drive.

The show will be free, but they are asking for a $5 donation from each audience member as they raise money to help HeartLine, the organization that answers the suicide hotline locally.

As a volunteer, McGinnis has plenty of experience talking to people who need someone in whom they can confide.

In March, he attempted suicide. He wrote about his experiences, including the aftermath, online.

“A big reason I wrote that is to help combat the social stigma,” he said. “People need help, and it’s nothing to be ashamed of.”

Had his phone not been turned off — part of the mounting financial troubles that contributed to his suicide attempt — he said a service like the National Suicide Prevention Lifeline could have stopped him before he tried to kill himself.

“This organization is there to help people who feel like they can’t get help from anybody else,” he said.

McGinnis said she called the line as a teenager and that, in many cases, the people calling do not want to die. They simply need to be heard.

“It reduces the stigma surrounding suicide, even just by saying the word and getting people to talk,” she said. “And it’s good to laugh, even when we’re dealing with heavy stuff, especially because of the heavy stuff.”

The programs are chronically underfunded, which is why Gillmore is so glad to have people who want to raise money to help. HeartLine phones are staffed 24 hours a day, 7 days a week by trained professionals, which isn’t cheap.

“I think it’s crucial,” she said. “There are plenty of times where our call specialists have intervened and saved a life.”

The show begins at 9 p.m. Those who would like to give but can’t attend can visit heartlineoklahoma.org to find donation information and more about the programs HeartLine provides.

Print headline: Live laughs, Sometimes, we all need a good laugh at life in order to get through it.