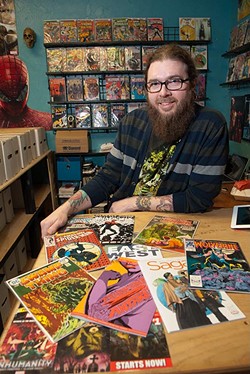 What happens when owners of a local comic book store — which draws its name and inspiration from one of the most popular and profitable science fiction movie franchises of the last 40 years — decide to close their doors?

If you’re Jeremy Privett and Camille and Bryan O’Quinn, owners of Empire Strikes Books, 600 NW 23rd St., you open up a new and larger shop down the hall and throw a party.

Empire Strikes Books opened on May 4, 2013 — better known to Star Wars fans as Force Day (“May the Fourth Be With You.” Get it?) — to serve fellow comic book fans in Uptown OKC while paying homage to Star Wars: Episode V – The Empire Strikes Back, Bryan’s favorite installment of the saga.

Camille, also a fan of comic books, had only one hesitation to the store opening: its name.

“Make sure we don’t get sued,” she advised her husband.

Flip the ink-covered pulp pages forward 20 months and you’ll read about how Empire Strikes Books has kept a steady clientele of fans and customers, plying them with the latest and greatest issues of scores of different comic book series, ranging from the popular to the obscure. (And no, they didn’t get sued over the store’s name.)

While the vast majority of the store is filled with nationally known titles, Bryan, Camille and Privett pride themselves on a special section filled with works from local comic artists like Jerry Bennett, Tyler Kelting, Brian Winkeler and Dorshak Bloch. Bryan said these homegrown works will now be showcased in the new location instead of being (proverbially) “shoved” into a corner in the current store.

The party, which is scheduled for Wednesday, Jan. 14, is to celebrate expanding the store’s space and the relaunch of the popular, long-running comic book series Star Wars.

In case you’ve been disconnected from the mainstream science fiction world in the past year, you should know that Star Wars, the epic sci-fi movie saga conceived and created (and, to some fans, wrecked and tainted) by George Lucas, is getting a reboot.

Hollywood megadirector and self-professed Star Wars fan J.J. Abrams — whose works include two installments each of the Mission: Impossible and Star Trek franchises, which have grossed nearly $2 billion worldwide to date — wouldn’t have gotten the nod to write and direct Star Wars: Episode VII – The Force Awakens had Lucas still been at the helm.

But it took The Walt Disney Company reaching into Mickey Mouse’s deep pockets in late 2012 to plunk down a cool $4 billion to scoop up Lucasfilm, Star Wars’ parent studio.

You might not know the Star Wars cinematic saga also had a companion comic book canon.

While Marvel actually owned and published the original comic book series from 1977 to 1987, the series was essentially defunct for a few years until Dark Horse Publishing put it back out on the stands in 1991. However, December was Star Wars’ final month with Dark Horse, and Marvel will reboot the storyline entirely.

George Lucas might be wiping away his tears with hundred-dollar bills nowadays over losing creative control over Luke and Leia. But the O’Quinns — Star Wars fans and comic book collectors — had different responses to the Force now being with Marvel and Disney. 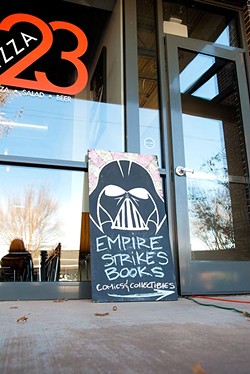 Bryan said his take on the sale was a bemused and slightly surprised “Wow.”

“The best thing George Lucas could do for the Star Wars series,” said Bryan, “was to sell it to someone else.”

Disney/Marvel wasn’t on his radar of potential suitors for Lucasfilm. Yet after processing how successfully Marvel’s recent adaptations of some of their classic comic titles to the big screen have fared — Iron Man and Captain America are ringing (and ka-chinging) examples — Bryan said he had “renewed hope” in the upcoming film series.

Camille’s initial response, however, was an incredulous “What?”

“A lot of us diehards were skeptical [of the purchase],” she said. “I did not want to see Leia drawn in with the rest of Disney’s princesses.”

But she was pleasantly surprised to hear about Abrams’ signing on to make Episode VII.

“He has the ability to make it as authentic [to the original storyline] as he can,” said Camille. 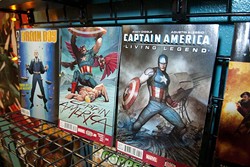 So what does this mean for the comic series? The O’Quinns said if recent pop culture crossovers are any indicator of what the future holds, Star Wars as a comic series might just go more mainstream.

Bryan said the relaunch of the Star Wars comic series is “a good jumping-on point” for anyone interested in the movies to get into the comics.

He and Camille both hoped it would also expose a new generation to comic books as a legitimate art form that has many merits (and some pretty cool stories, too).

For more information on the Empire Strikes Books launch party, including its costume contest and pre-ordering copies of the upcoming Star Wars first issue, call 771-0763.