KWTV anchor Kelly Ogle’s ‘My 2 Cents’ betrays a crush on authoritarian treatment of the press and political opponents. 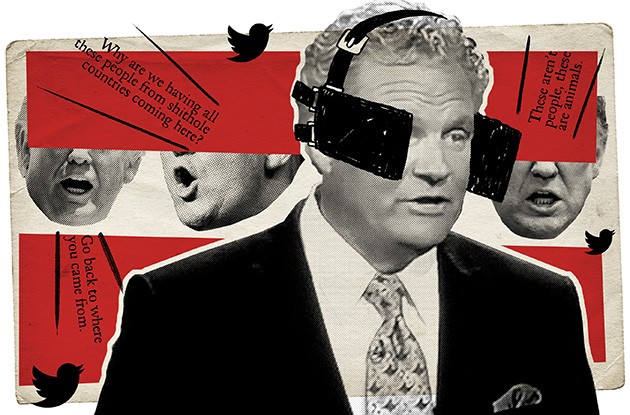 On July 16, as a nation processed what it meant to have a president who explicitly engaged in what the Equal Employment Opportunity Commission calls “potentially unlawful conduct including insults, taunting, or ethnic epithets, such as making fun of a person’s foreign accent or comments like, ‘Go back to where you came from,’ whether made by supervisors or by co-workers,” KWTV anchor Kelly Ogle took the side of the bully.

Speaker Nancy Pelosi led the House of Representatives in a resolution condemning President Donald Trump for tweets that told Reps. Alexandria Ocasio-Cortez of New York, Ilhan Omar of Minnesota, Ayanna Pressley of Massachusetts and Rashida Tlaib of Michigan they should “go back and help fix the totally broken and crime infested places from which they came.” In response, Ogle, whose “My 2 Cents” opinion segment runs 10 p.m. weekdays on News9, decided the real issue was not racism, but people calling racists … racists.

“Eventually the House held an actual vote,” Ogle said. “Not on anything most of us care about. They voted to condemn the president for his tweets. It was a barroom brawl, a bare-knuckle fight over some tweets. They were certainly un-presidential, but can we knock it off with this race to call everything racist?”

I think it is fair to say that nobody is calling “everything racist.” Our beautiful world is filled with wondrous things that are objectively free of racial animus and definitively not racist. Trump is not one of those wondrous things.

Yet Ogle chose to devote his opinion piece to deflecting blame for this cancer on our body politic by complaining about Pelosi, congressional Democrats and the calling out of racism in a time when the antagonism of “others” is de rigueur in the Republican Party.

This is no surprise, given that Ogle is a master of false equivalency. On Nov. 7, 2018, when The White House pulled Jim Acosta’s press pass after the CNN reporter refused to give up his microphone until Trump answered his question, Ogle sided against his own industry’s quest for truth.

“The whole exchange just made me cringe,” Ogle said.

Yes, me too, but not for the same reason.

“The White House says Acosta lost his credentials partly because he essentially strong-armed the intern trying to take the mic. He didn’t, but he should have given it to her. He’d had his turn; he’s made himself too much of the story,” Ogle said. “Trump is the President, for crying out loud. He has got to show some restraint and stop these childish personal attacks. Neither one was right today. They both behaved beneath the dignity of their office.”

“Their office”? Acosta does not hold “office.” He is a reporter working in the private sector, not an elected official with a responsibility to be as honest as governmentally possible with reporters. I cannot believe I have to explain the relative professional burdens of U.S. presidents and television reporters to someone who has been a reporter his entire adult life. The 126-year-old quote from Chicago Evening Post reporter Finley Peter Dunne saying that “the job of the newspaper is to comfort the afflicted and afflict the comfortable” is still true today, but Ogle’s docile and deferential treatment of Trump comforts the comfortable, which in turn afflicts the afflicted.

Under Trump, “My 2 Cents” is almost indistinguishable from Sinclair Broadcast Group’s “Bottom Line with Boris Epshteyn” segments, in which a former Trump employee does the daily bidding of his ex-boss in “must-run” commentaries shown throughout the country. In June, when Trump threatened tariffs against the importing of goods from Mexico over the current immigration crisis, Ogle seemed in awe of his strongman.

“Don’t be surprised if President Trump uses that same strategy to try to get them to pony up for part of his border wall,” Ogle said.

I’m not sure if this was intended as humor.

Ogle, unlike Epshteyn, spends the balance of the news hole on KWTV’s evening newscasts reporting the news, making it harder for viewers to distinguish objective reporting from his opinion pieces. I am a firm believer in the power of a well-reasoned editorial, but the consumers need to understand the difference between news and opinion at a time when the line is blurry to the point of invisibility. Honest labeling is important in the information business, and swinging from fact to opinion and back confuses the audience.

Speaking truth to power is absolutely essential in an era of corruption and kleptocracy, but when Ogle takes a supine stance with Trump, it feels as if he is “ripping and reading” the same talking points espoused each morning on Fox and Friends.

I generally and genuinely support KWTV for staying independent when so many of its competitors are merely small cogs in enormous corporate machines, and I sincerely hope the station remains independent for the foreseeable future. But “My 2 Cents” is a relic of a time when CBS’ Walter Cronkite, NBC’s John Chancellor and ABC’s Howard K. Smith weighed in and shaped the national discussion from the three bully pulpits that existed in television at the time. Such opinion pieces have largely fallen out of favor at the network level, but they are now thriving at the affiliates and on 24-hour news stations. They choke out the truth by emphasizing conjecture, which is a great strategy if you are trying to sow confusion and subvert democracy.