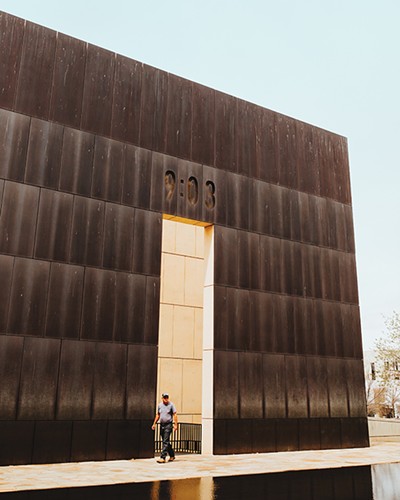 This month, as Oklahoma City observed the 24th anniversary of the Alfred P. Murrah Federal Building bombing, it became clear that disinformation about this mass murder has thrived around us.

As the city mourned April 19, Twitter users that we used to call fringe-dwellers until their malevolence was mainstreamed were out in full force. A preacher who currently serves as an interim pastor for a southwestern Oklahoma Assembly of God congregation tried to justify the far-right ideology that fueled Timothy McVeigh’s attack.

“That tragedy was caused so [sic] the government handling of the Waco event,” he wrote. “That was all dems and president Clinton admin! So, please take your dumb ideology elsewhere!!!!”

First, while the deaths undeniably fit the definition of “tragedy,” the word’s use in this case is horribly reductive. EF5 tornados destroying wide swaths of our community are tragedies and tragedies alone. The Murrah bombing was a mass murder by McVeigh, who had free will and exercised it. That is not simply a  “tragedy.” That is a crime, and since McVeigh was in up to his eyeballs in white supremacist literature and anti-government rhetoric, it was a hate crime.

This pastor, a graduate of Jerry Falwell Jr.’s Liberty University, has some interesting followers on Twitter, including a food truck that I (used to) seek out at street festivals and, um… the official account for an Oklahoma City park. Why?

Then there was the Bartlesville business owner, former state House of Representatives candidate and QAnon enthusiast who referred to the facts surrounding McVeigh’s attack as a “#NOBLELIE — and a proven cover-up.” He went on to push a YouTube documentary titled A Noble Lie and wrote, “please view, share #OKGOP & prepare for #2020 #MAGA.”

A prominent local banker follows this wingnut on Twitter. Why?

I take particular offense on this subject, especially when people with odious political intentions push a counter-narrative that desecrates the memories of 168 people lost in that mass killing. Less than a year after my college graduation, I spent every day for three weeks at the corner of NW Sixth Street and Harvey Avenue. I saw the physical and emotional devastation and then went on to report on hate groups who abetted or supported McVeigh as well as the unconscionable efforts of some political leaders and members of the local media at the time to place the blame on an Iraqi immigrant who fled his country to escape political oppression.

As Miguel Rios reported in his superb story in the April 17 issue of Oklahoma Gazette, the same forces that radicalized the Oklahoma City bomber are working to recruit the McVeighs of tomorrow. These bad actors are out in full force, muddying what should be crystal-clear waters.  They are preparing for “#2020 #MAGA” and have high-profile people and organizations following them.

Oklahoma City National Memorial & Museum does an exemplary job of telling the story of how an act of extraordinary hate scarred our city. Each year, the names of all victims are read in a ceremony so their memories do not become abstractions. Each year, family and friends of victims continue to place messages and post photos on the cyclone fencing at the site. For anyone who starts to feel a little foggy about what happened that day, a visit to Oklahoma City National Memorial & Museum will clear things up quickly. We cannot allow ourselves to grieve generically about the events of April 19, 1995.

When local news is doing its job in true Fourth Estate fashion, misinformation and disinformation are deprived of oxygen and then suffocate. This is why local news organizations must work harder to tell the truth about the Murrah bombing forcefully and without equivocation.

In 2020, the same year that those aforementioned QAnon-loving conspiracy merchants look forward to a #MAGA victory/Donald Trump reelection, Oklahoma City will observe the 25th anniversary of the attack. Members of the local press should take this opportunity to not simply mark the occasion with script fonts and soft music but conduct in-depth reporting on the bombing itself and its legacy.

That “legacy” is not simply the economic development that has taken place in the town in the past quarter century. Again, that is a dangerously reductive view. We must also deal with some ugly truths. For instance, why has hate speech in the form of March’s racist graffiti in Oklahoma City and Norman made a comeback? If ever there was a place that should have an anti-hate force field around it, it is our metro area. We are not doing enough to combat these attitudes and behaviors.

Oklahoma Gazette will be looking closely at the true legacy of McVeigh’s crimes in the next year. All members of the local press should be planning similar coverage because at this point in the history of our city, our state and our nation, there is no room for soft-focus reporting.

Anything less than uncompromised reporting on the attack and its aftermath provides an opening for the people who want to paint McVeigh as a martyr or a folk hero. We must push back hard at these notions, which are being espoused by people in our own community. We must take the opportunity to educate them and correct their misguided beliefs.

When the white separatist group formerly known as Identity Evropa posted stickers promoting its organization in Midtown, Deep Deuce, 16th Street Plaza District and other high-profile central neighborhoods, the stickers were swiftly torn down by people, including me, whose memories are too strong to allow this to flourish in a place with our history. If we tell our story accurately, open-carry hate cannot survive in Oklahoma City.