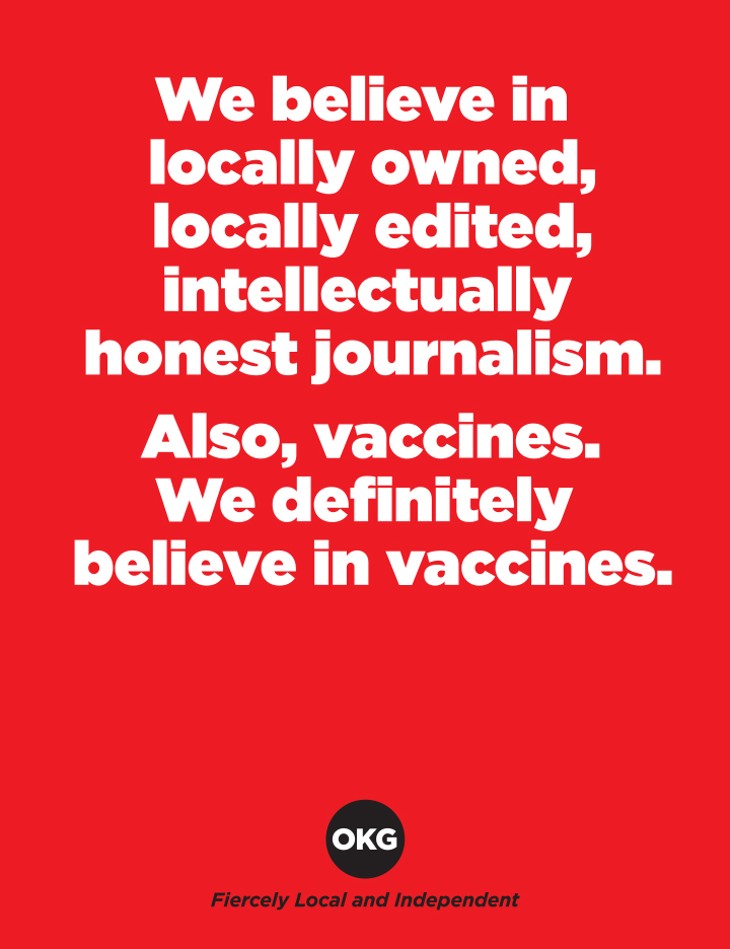 Just 10 months ago, a child in Norman was diagnosed with an entirely preventable disease, one for which a vaccine was developed 55 years ago. Centers for Disease Control and Prevention declared the disease to be eradicated in the U.S. in 2000, but 18 years later, Oklahoma Department of Health was forced to issue a press release warning the public about potential contraction of measles if you’d been to a Norman pediatric health clinic, a nearby hospital or a Norman Chuck E. Cheese location during the first week of February.

In the United States of America.

Here we are talking about measles again like we’ve been zapped, Pleasantville-style, into a black-and-white Encyclopedia Britannica health education film from the 1950s. Thanks to a discredited 20-year-old paper authored by a British gastroenterologist who apparently tried to self-examine his own colon headfirst, we now have measles outbreaks. Furthermore, a local media outlet that should feel some responsibility for passing along garbage science gave a local anesthesiologist/anti-vaccine activist a forum to do just that.

How did we start contracting an ancient malady in the 21st century by choice? It all started in 1998 when Andrew Wakefield and a dozen other physicians published “Ileal-lymphoid nodular hyperplasia, non-specific colitis, and pervasive developmental disorder in children” in the British medical journal The Lancet. Those who got past that thick-as-pudding title learned that Wakefield et. al. were claiming a causal connection between the measles-mumps-rubella (MMR) vaccine and the incidence of autism.

Quite understandably, many parents of autistic children latched onto Wakefield’s report as an explanation for their children’s mystifying condition. People want answers when their children are atypical. Wakefield’s report, which claimed the presence of small amounts of mercury in the MMR vaccine caused autism, seemed to provide those answers. Wakefield toured the U.S. and spoke at autism conferences, and his claims were included in a 60 Minutes report.

Then, beginning in 2003 and continuing through last year, reporter Brian Deer of The Sunday Times in London published a string of revelations about Wakefield, including that while he claimed to be independent and uncompromised by an agenda, Wakefield had been commissioned by British solicitor Richard Barr to discredit the efficacy of the MMR vaccine, thus allowing Barr to bring class-action lawsuits against drug companies manufacturing the shot. And while no other clinicians were able to replicate Wakefield’s findings, Deer reported that Wakefield had intended to launch his own vaccine, which would only have a place in the market if the MMR shot were discredited.

Wakefield was subsequently booted from the U.K.’s General Medical Council for his grossly irresponsible statements and The Lancet retracted the paper, but his fake findings were in the wind. In 2005, an American nonprofit called Generation Rescue was founded to spread Wakefield’s false gospel on autism. Its president is now former Playboy model and MTV Singled Out co-host Jenny McCarthy, the highest-profile anti-vaxxer in the country.

Because of McCarthy’s group’s efforts, parental buy-in on vaccinations has plummeted in the U.S. and U.K. In 2017, over 60 cases of measles were reported among Minnesota’s large Somali-American community, the result of false information spread within that community linking autism to the MMR shot.

These preventable outbreaks are public health disasters, and the problem is so acute that the Centers for Disease Control and Prevention devotes an entire page on its website to debunking the Wakefield/McCarthy myth.

But the careful explanations by scientists and clinicians are not good enough for The Oklahoman.

On Dec. 10, The Oklahoman’s opinion page ran a guest column by Steven Lantier, an anesthesiologist with The Surgery Center of Oklahoma, who wrote the following: “Vaccines are absolutely one of the causes of autism.” He went on say that there were “documented cases of vaccines given one day, and regression into autism the next,” though there is no scientific evidence to support this and certainly no case studies cited in the column.

Thanks to the First Amendment, Lantier can say anything he wants, though if I ever see him hovering over me with a gas mask, I’m jumping off the table. I mainly blame The Oklahoman’s editorial board for promoting Lantier’s claims. Sure, they ran an opposing viewpoint the next day, but that just promotes the irresponsible belief that reasonable people can disagree on the importance of vaccinations, or as Kellyanne Conway said last year, that there are “alternative facts.”

The editorial board seems to have gone all-in on junk science, forcing The Oklahoman’s reporters to refute its unconscionable claims on social media. Just the week before, the board wrote that climate change is not worth fighting if it means sacrificing comfort. Reporters are busy as it is without having to clean up these messes every single week on Twitter.

I don’t know this for a fact, but I wonder if this has something to do with Governor-elect Kevin Stitt’s past anti-vaxxer statements. A lot of people voted to have Oklahoma run like a business, specifically like a subprime lender, but not as many want to let their babies build up a tolerance for diphtheria rather than get their DPT shot. Running Lantier’s opinion piece certainly looks like an attempt to shore up one of Stitt’s weakest policy areas.

What I do believe is that people have lived with such relative safety for so long that the threat of serious diseases seems theoretical to many of them. My parents’ generation can remember when public pools were closed in Oklahoma City to reduce the spread of polio. Dr. Jonas Salk’s polio vaccine arrived when they were in their early teens. He was a superhero to millions of children, saving them from a painful life spent using crutches and wheelchairs and being respirated in iron lungs. By giving a forum for scientifically refuted claims about vaccines, The Oklahoman does a terrible injustice to Salk’s memory and to the future of our state’s children.