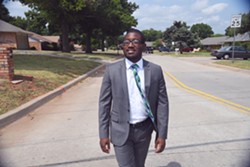 Driven by the notion that Oklahoma City’s neighborhoods could be as great as downtown, leaders of MAPS 4 Neighborhoods arranged countless town halls to tap into residents’ needs in all areas of the city.

Like the group of civic activists leading the charge, residents sensed that synergy between downtown and MAPS (Metropolitan Area Projects) could transcend into their neighborhoods. Since 1993, Oklahoma City voters have supported sales tax initiatives — MAPS — to pave the way for large civic improvement projects.

At the meetings, a majority of residents favored additional streetlights and new sidewalk construction along residential streets. Some desired improvements to city parks and recreation centers. Bus stops featuring covered shelters and cleanup of blighted houses were discussed. Residents called for new programs incentivizing development of commercial areas in neighborhoods, modeled after the successful commercial Plaza and Paseo Arts districts, which are surrounded by homes.

“We had so many needs in neighborhoods, and we wanted those voices to be heard,” said Camal Pennington, a member of the grassroots organization MAPS 4 Neighborhoods, which operates independently from city government. “Since MAPS has been such a transformative avenue to be able to invest in the community, it seemed that was a perfect way to make that investment.”

The group plans to present results from their town halls and gather additional feedback at a Ward 2 community meeting set for Tuesday. Following reports of the Oklahoma City Council considering a MAPS vote this November, group leaders are utilizing the meeting as a chance to hear citizens’ responses with the intent of possibly moving the project to a public vote in six months.

“It was a surprise to us that they may more forward in November,” Pennington said. “What is exciting to us is the city is really hearing there is a need. We’ve been able to demonstrate that need through the community meetings. This is an opportunity to move forward on answering these serious concerns.”

If the council pushed for a fall vote, the measure would appear on an increasingly crowded Nov. 8 ballot. In addition to presidential, federal and state races, Oklahomans will be asked to vote on issues addressing farming and ranching, the death penalty and a 1-cent sales tax dedicated to education funding.

Other issues on the state ballot might include medical marijuana, criminal justice reform and alcohol reform.

Oklahoma City began its pay-as-you-go structure to improve the city following voter approval in 1993. In 2009, voters approved the third installment of MAPS, called MAPS 3. The city is investing $777 million in eight quality-of-life projects, including the streetcar, downtown park and new convention center. Considered an innovative model, MAPS allows the city to pay for projects from tax collections and projects are completed debt-free.

MAPS 4 Neighborhoods is proposed as the follow-up to MAPS 3, which sunsets in December 2017.

Based on past ballot measures, MAPS 4 Neighborhoods was operating under the assumption city leaders might pursue another MAPS vote in 2017.

There are still many details to be worked out before ballot language could be delivered to election officials. MAPS 4 Neighborhoods is ready to work with city leaders on the particulars, which includes lists of priorities and projects, local control and how much would be invested into neighborhoods.

“Again, it is important to us that this be a grassroots effort,” Pennington said, “and those voices be heard.”

Print headline: MAPS 4 vote?, With the prospect of MAPS 4 Neighborhoods appearing on the November ballot, Tuesday’s community meeting is a prime time to voice support or concern.