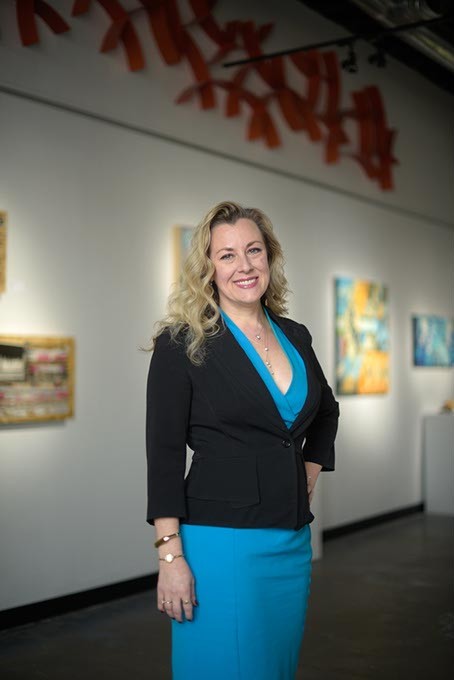 Kendra Horn comes from a long line of Oklahomans dedicated to serving the community. Her great-grandmother always kept her door open for others, whether for a meal or a place to stay. Her grandparents operated a Depression-era grocery store ensuring Chickasha families didn’t go hungry.

Growing up around a family of teachers and small business owners in Grady County, Horn heard, “If you see something that is not right, you don’t complain about it. You get to work. You figure out what can be done and how to be part of the solution.”

Horn carries that philosophy into her career, from working on Capitol Hill as former U.S. Rep. Brad Carson’s press secretary and overseeing government affairs for the nonprofit Space Foundation to founding Oklahoma Women Lead to empower and engage women, especially those systematically disenfranchised from the civic process. Until recently, Horn was executive director of Sally’s List, a nonpartisan organization that recruits and trains Oklahoman women to run for local and state offices.

Now Horn, 41, hopes to continue her work on a larger scale. The Democrat is running for U.S. Congress and has her sights set on unseating two-term Rep. Steve Russell, R-Choctaw, who represents Oklahoma’s 5th Congressional District.

“Why I am running is because I feel like there are more things that unite us than divide us,” Horn told Oklahoma Gazette last week following her announcement to run for office. “We need representation that is going to rise above partisan politics and the divisiveness in the current conversation. I fundamentally believe in public service. It’s what calls to me. It’s one of the reasons I’ve done all that I’ve done. When looking at this seat and this state and knowing the needs, it’s time for somebody to stand up.”

If Horn succeeds, she would become the third woman to serve the Sooner State in the U.S. House of Representatives. Beyond that, she joins a roster of determined Democrats running in Republican strongholds and of women across the United States adding their names to ballots. Oklahoma’s 5th Congressional District includes the majority of Oklahoma County and Pottawatomie and Seminole counties.

The last time the district leaned Democrat was in 1974 when voters elected Rep. John Jarman. The longtime representative switched to the Republican Party in 1975 before retiring two years later.

Horn is far from intimated by the district’s history. The Oklahoma City resident said she is ready for Washington, D.C. to tackle issues important to Oklahomans. Horn’s pitch includes a pledge to middle-class families, fighting for rural and urban access to health care, strengthening federal programs in public schools to allow every child access to a quality public education and supporting efforts to incentivize small businesses and industries in the state.

“Years ago, I began referring to myself as a practical idealist,” Horn said. “I see the challenges we have on a state and national level, but I also see the opportunities. … I want to be a voice for all Oklahomans. I am going to be open and listen. I want to make sure that people feel they have a voice in D.C.”

She said she wants to connect with voters in Oklahoma’s 5th District and know the issues they care about.

Since her return to Oklahoma in 2014 to be closer to family and contribute to Oklahoma City’s renewal, she founded Oklahoma Women Lead after consistent conversations with women who combated feelings of seclusion and vulnerability. The organization recognizes that women in Oklahoma are leaders across organizations of all types, including the home and workplace. Through workshops and seminars, women not only develop their leadership skills but also learn how to be informed, connected and active in their lives and communities.

“I believe by helping people understand how things work, they can better make their voices heard,” Horn said about Women Lead.

Horn, who has experience in running several campaigns, including former state Rep. Joe Dorman’s quest for the governor’s seat, believes there is a path for Oklahoma City, its suburbs and rural communities to elect a Democrat in what has been considered a Republican stronghold. In recent years, Democrats have flipped state House seats in areas going more diverse and younger.

“We can look at Oklahoma City and the growth that Oklahoma City experienced by investing in itself,” Horn said. “We need a voice, someone who is responsive to the community and asking people about their challenges. We need someone who is going to sit down with people from across the aisle on what’s working and what’s not working. That’s precisely what I want to do.”