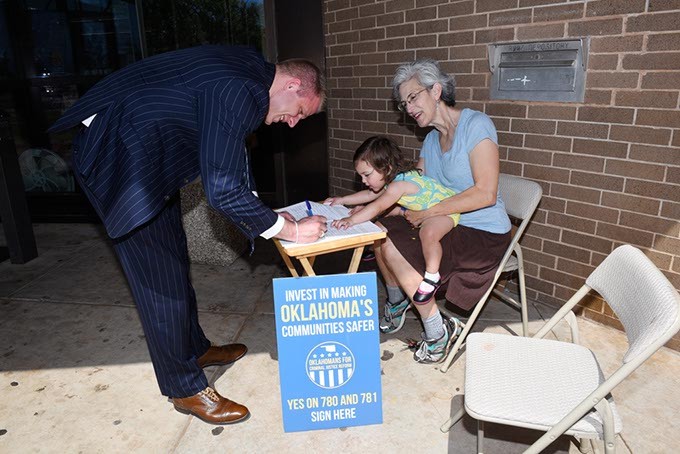 In front of a crowd of Oklahomans with different backgrounds, ages and ethnicities, Rev. Jesse Jackson held up his hand and tucked fingers into his palm.

His thumb and index finger formed a “C” shape no larger than 2 inches. With the crowds’ eyes on the hollow space, Jackson (unrelated to the ’60s-era civil rights activist and reverend of the same name) explained Oklahomans caught with marijuana fitting in such a minuscule area spend years behind bars.

The crowd replied with a loud round of applause. Earlier, many in the audience raised their hands when asked if a family member was currently or formerly incarcerated.

The public discussion, held at First Christian Church of Oklahoma City, was hosted by a number of faith organizations and peace advocacy groups.

Prater challenged Jackson’s analysis of sentences for possession of marijuana, doubting that anyone with small amounts of marijuana serves serious jail time.

Instead, Prater cited past studies supporting his assertion that most prisoners serve time for third, fourth or fifth nonviolent felony offenses, which can include drug charges.

“My job is about public safety,” Prater said. “My job is not about incarceration. If incarceration is part of making this community safe and it is necessary, that’s exactly what I’ll do.”

“We don’t have a lot of options these days,” Prater said. “Frankly, the lack of options is what I believe causes a lot of people to be incarcerated who would otherwise not need to be locked up.”

The district attorney said he supports the use of more diversion programs, which are designed to help offenders avoid charges and criminal records through working a specific court-approved program. Such programs focus on individuals with substance use and mental health issues.

Prater described an intimate relationship between the rise in extreme poverty, lack of educational opportunities, generational cycles of gang activity, the breakdown of the nuclear family and crime.

“It is not a one-stop shop,” Prater said. “You can’t just point to the DA or a legislator. … We have an incarceration problem in Oklahoma. … We all own it, every one of us.”

In 2014, Oklahoma had the second-highest incarceration rate in the nation, according to the U.S. Bureau of Justice Statistics.

This spring, the state’s prison system operated at 120 percent capacity, according to Oklahoma Department of Corrections officials.

The numbers are well-known to Steele. During his time at the Capitol, he worked to pass the Justice Reinvestment Initiative, which listed recommendations for enhancing public safety, addiction treatment and mental health as well as strengthening post-release supervision programs.

Despite passage in 2012, the plan was never fully implemented.

The call for change continues as Oklahomans for Criminal Justice Reform, a group chaired by Steele, pushes for similar measures through an initiative petition. If successful, State Question 780 could go to a public vote in November.

Additionally, another initiative petition, State Question 781, creates the County Community Safety Investment Fund, which would allow county leaders to implement criminal justice reforms in their own communities. Savings created from implementing the reforms of State Question 780 would be sent to the counties to fund treatment services, mental health services and diversion programs.

Similar sentencing measures are in place in other states, but Oklahomans for Criminal Justice Reform looks to address the root causes of criminal behavior and push more low-level offenders into treatment or programs instead of prison.

“Just because a person battles mental health or has an addiction does not make that person a criminal,” Steele said. “It does not make them a bad person. We need to get to a point where we help those who are sick in our society.”

Circulators will collect signatures for the state questions through June 7. If more than 66,000 valid signatures are collected, the questions will appear on the November ballot.

When prompted by the crowd, the panel briefly debated racial discrimination in the criminal justice system. The link between poverty and crime was also discussed. All panelists and many members of the crowd agreed on one thing: The system needs to be changed.