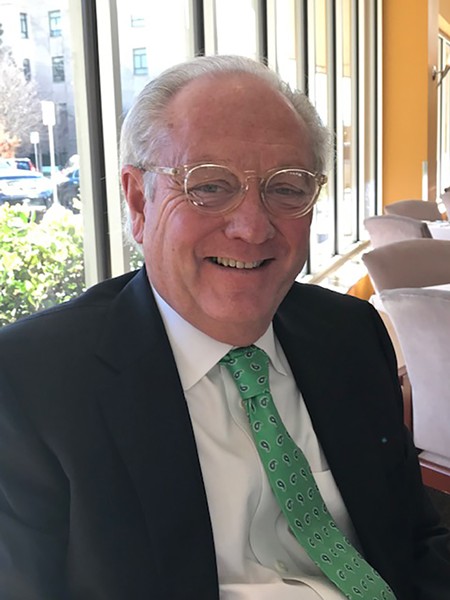 After living in Oklahoma City’s sixth ward for about 20 years, Jim Holman said his name is a familiar one among neighbors. He hopes it carries a good reputation, and if the past few months have been any indication, he believes it does.

“Asking for help is not the easiest thing to do,” Holman said. “My friends and neighbors, the community … has been incredibly supportive of my decision.”

In October, Holman added his name to the list of candidates running to replace Oklahoma City’s Ward 6 councilwoman Meg Salyer, who announced her retirement in June after holding the office for a decade.

Holman’s application for city council brings the number of candidates running to replace Salyer to three. Ward 6 is bordered by NW 23rd Street on the north and SW 59th Street on the south.

Holman intended on filing for office earlier but was delayed by an injury he sustained while running.

“I’m a devout runner,” he said. “For the first time in my life, a few months ago, I fell while I was running and had to have surgery on my shoulder. I had never had surgery before, so quite frankly, I wasn’t sure what the recovery would be like. … I didn’t know if I would be physically equipped to handle the position, and I told myself, ‘If I survive this after a few months, I’ll sign up.’”

After a few rounds of physical therapy, Holman was back to running on the trails in Ward 6 and announced his run for the city council seat.

While Holman said his seniority contrasts with the youth of his opponents, he does not believe it puts him at a disadvantage.

“Age is just a number,” he said. “I think more focus should be on attitude. I’m 68, but I’m energetic and curious. … I never want to stop learning.”

Holman was born near Altus to a surgeon father and a mother who was an administrative assistant and homemaker. He has two brothers.

He received a bachelor’s degree in economics from Southwestern Oklahoma State University in Weatherford before traveling to neighboring states, where he worked in sales.

His career and love for the Sooner State eventually brought him back to Oklahoma, where he launched The Car Store, a used car dealership with brick-and-mortar locations currently in south Oklahoma City, Midwest City and north Oklahoma City.

Holman retired from the business recently and hopes to dedicate his time toward addressing concerns of Ward 6 residents and building upon the legacy left by Salyer.

“She seems to have played a significant role in the renaissance of Oklahoma City,” Holman said. “I would love to have the chance to build upon that.”

Holman said his age and experience has lent him a deep love, respect and understanding of Ward 6 and Oklahoma City.

If elected, Holman said he would bring with him a desire to strengthen Oklahoma City’s schools and economy.

“We are making great investments into our communities, and I want to make sure those investments are sustainable,” he said.

Like Salyer, Holman enjoys working with younger generations and would like to contribute ideas to a city council that is diverse in age, race, gender and ideology.

“I love millennials,” he said. “They are passionate and honest and are great at challenging the status quo.”

“I love being around young people,” Salyer said. “We all kind of gravitate to energy, and the young people in this community are bringing so much energy and excitement.”

While Holman’s agenda for Ward 6 is seemingly general, his opponents have articulated specific areas they would like to cast their attention to if elected.

Harding, his wife Amanda and their three children live in Heritage Hills, a historic preservation district within the boundaries of Ward 6.

When Heritage Hills residents lobbied for additional regulations to be placed upon Airbnb short-term renters within their neighborhood in October, Harding told Oklahoma Gazette that residents of the community should decide how and if regulations should be incorporated.

“Concerns are valid on both sides,” Harding said. “But ultimately, residents should get to decide what is best for them and the city council should support that decision.”

As a member of the MAPS 3 advisory board, Harding said improving city transportation methods are a top concern.

“Investing in all forms of transit is vital for Oklahoma City to continue on its path of progress,” he said.

Choosing to live life without a car, Hamon, an education coordinator at Mental Health Association of Oklahoma, said she also considers herself an advocate for increased and enhanced transportation methods in Oklahoma City.

“There’s a stigma still around riding the bus,” Hamon said. “It can be very intimidating for first-time riders. If we are going to invest money into public transportation, I think it’s just as important that we educate the public on how to use it and to remove the idea that the bus is not for everyone.”

A change that Hamon would like to see includes increasing bus pick-up times from every 30 minutes to every 10-15 minutes, a measure she said cities on the rise in other states have taken to support community wellbeing and growth. Hamon would also like to create safer bike-riding trails for residents.

Hamon’s other priorities include mental health and economic growth.

While Hamon believes Oklahoma City is experiencing growth, she said not everyone is a part of it.

“There’s this narrative that Oklahoma City is in a renaissance,” she said. “That may be true, but it’s not the reality for everyone who lives here.”

She said rent burden, where the cost of rent is so high that little money is left each month for other basic needs like food and health care, is on the rise.

If elected to represent Ward 6, Hamon hopes to work on creating affordable housing within city limits.

Holman said he doesn’t have a particular agenda.