Oklahoma State Rep. Jon Echols is a conservative Republican serving southwest Oklahoma and northwest Cleveland counties. He’s a Bible-thumping, born-again Christian who serves as a deacon in his Southern Baptist church. He’s pro-life and pro-business. And Echols is the greatest ally to medical marijuana at the state Capitol.

In addition to being a politician, lawyer, entrepreneur, husband and father, he’s also Katie’s uncle.

“My niece has a syndrome called Dravet,” Echols said. “Dravet is essentially a severe seizure disorder. And we tried everything with Katie. Katie’s had surgery, we got her a seizure dog, she has seen doctors from Oklahoma City to Dallas and everywhere in between. And really, I mean, we just couldn’t get it under control. And my brother called me one day and he said, ‘Hey I want you to see this report by Sanjay Gupta. I gotta tell ya, I think medical marijuana would help Katie.’ And I said, you know, my gut reaction was like, ‘You’re crazy. I’m a freshman member. Even if it would, I don’t know how to do that. I don’t even know how we do this.’

“I had my doubts. So I started doing some research on my own and discovered at the time something called Charlotte’s Web and then something called Haleigh’s Hope. They were high CBD strains with very low [tetrahydrocannabinol (THC)], .3 or below. They were actually considered hemp. Then I did some more research and realized one state in the union — one — has legalized .3 THC and high CBD strains, and that was the state of Utah, and they had done it the year before. And I figured, you know, if Utah can do it, we should be able to do it.”

He put in for an interim study.

“Normally what people do when they do interim studies like this is they lead with what I’ll call the story,” Echols said. “They lead with the family. ... I led with the science.”

He brought in pediatric neurologists from Tulsa and Dallas and then let several children, including Katie, speak.

“I also get frustrated when people call things anecdotal because they use it as a way to try to downplay their significance,” he said. “I mean, it’s anecdotal, but when it’s you, it’s 100 percent. ... Katie’s not an anecdote; she’s a person, and she deserves a shot, and there are thousands of Oklahoma children just like that.”

Thanks to Katie and her uncle, CBD became legal in Oklahoma. She started treatment in May of 2015 and has been able to wean herself off several medications since beginning to ingest the oil.

After being on CBD for about six months, she fell while running and suffered fractures.

“I was so excited that my niece broke both her arms because before then, Katie couldn’t run,” Echols said. “She couldn’t do that. She didn’t have that ability. Broken bones will heal, but we gave her and several other kids a new quality of life, a new ability to do things they couldn’t have done.”

But his work was just beginning.

“What we did inside the bill, we legalized pure CBD, and then we legalized CBD with up to .3 THC for children with these certain conditions. ... I expanded on that bill every year. The very next year, when the program was wildly successful, I expanded it to include adults,” he said. “I know right now, it’s weird going back in time, it looks like no big deal because we just passed passed 788, but we were the second state in the union that actually did it. After that, Kansas copied our bill, Texas copied a version of our bill. There are 10 other states that basically did what Oklahoma did. If you would have asked me at that time, ‘Are you for medical marijuana?’ I probably would have said no. But I continued to educate myself and I kept expanding that law.”

And then Echols’ mother, Eileen, was diagnosed with breast cancer that metastasized to her brain and lungs. 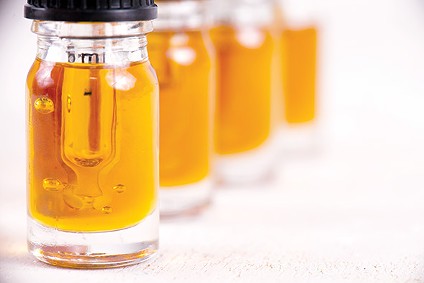 She is a former Oklahoma County special district judge and sought-after family lawyer, and Echols saw the disease slowly devour a brilliant woman and his closest friend.

Just before her death, she stopped eating and was prescribed Marinol, a synthetic form of THC. She regained her appetite and was able to live a while longer and with better quality of life.

There was the hemp bill, and then State Question 788 passed overwhelmingly. On election night, Echols did a live television interview.

“What I said was, ‘The people have spoken, and we’re going to follow the will of the people at the Legislature.’ There was talk of delaying the implementation of 788, there was talk of just gutting it and moving on,” Echols said. “That’s not representative democracy. Do I think 788 needs some extra regulation around it? Absolutely. Of course it does, but so do the drafters of 788.”

But Echols said that license price hikes, THC limits and qualifying conditions for patients are not part of the regulatory agenda for the legislative session that begins in February. Echols does, however, anticipate private lab testing for cannabinoids and heavy metals for smokeable and vapeable product and quality testing for edibles to begin in the spring.

“I am by no means a marijuana expert. I don’t pretend to be an expert in this field. ... When it comes to marijuana, I’m doing the best that I can,” he said. “I’m not a legalization guy. I actually don’t believe in legalization, which is kind of this weird dichotomy. In fairness, I guess four years ago, I’m not sure I believed in medical, so some things change. If we have an open and accessible and robust medical program, something that doesn’t have qualifying conditions and these other things, then, honestly, that’s what’s needed. I don’t know that you need recreational at that point, if we get this program right, if we don’t overregulate it, if we don’t regulate it out of existence.

“I don’t want to protect mom-and-pops against big business, and I don’t want to protect big business so that they can corner the market. I want the patient to have safe and secure products that they know what they’re getting and they’re getting at a reasonable price and we’re able to implement what the people told us to do. And if that gets me beat in my next election, that’s OK. I’ll have a career that was filled with some great pro-life legislation, some really good pro-business legislation and a bill that I know saved thousands of people. That’s okay. I can hang my hat on that.”