After years of crisscrossing the country and earning recognition from some of the most prestigious barbecue competitions in the country, last October, Lon and JoAnne Mitchell decided create a permanent home for Jo-Bawb’s Championship BBQ.

Located at 7921 Northside Drive, down North Rockwell Avenue off Northwest Expressway, Jo-Bawb’s operates out of a state-of-the-art trailer with a massive, built-in smoker parked outside a converted office building that provides covered seating, bathrooms and an opportunity to view the Mitchells’ massive trophy collection from years of chasing glory on the competition circuit.

“This isn’t even all of them,” Lon Mitchell said as he pointed out a reserve grand champion finish at the Smithfield King of the Smoker competition in California and a barrel cap signed by all of the top teams in the country at the Jack Daniel’s World Championship Invitational Barbecue at which Jo-Bawb’s finished third in brisket and seventh overall out of 90 teams.

In 2015, Jo-Bawb’s finished 13th in the country in Kansas City Barbecue Society-sanctioned events and followed it up with a 22nd overall finish in 2016 despite the fact it was competing from Gillette, Wyoming, and Mitchell said it made it difficult to get to more competitions to increase its ranking.

“It was just like a lot of guys who cooked barbecue on the porch or patio, and they invite a few friends over and the friends — who as long as they’re getting free barbecue and beer — say it’s the best they’ve ever had,” Mitchell said. “Then you start to wonder how you stack up against the big boys. You get into your first competition, and if you get your named called once, you’re hooked.”

Life on the competition barbecue circuit is difficult. Even the most successful teams receive prize money every four to five competitions, which is only enough to pay for about three more competitions. They relied on product sponsorships, but once travel and smoker upkeep were factored in, Mitchell said it left them in the red.

"I don’t think Cole had anything to do with my slaw." — Lon Mitchell tweet this

“You get so hooked going to competition that it’s about the only thing you care about, it seems,” he said.

After the Mitchells’ daughter and son-in-law Dusti and Quinn Martin — who are also partners in Jo-Bawb’s — moved to Oklahoma for work, the Mitchells decided to uproot from Wyoming, set up shop in Oklahoma and get out of the competition game.

After looking into a brick-and-mortar location, they decided it would better to start Jo-Bawb’s in a massive food trailer that includes television screens and large prep areas. At first, they thought about being mobile with the trailer, but they decided on a permanent location except for occasional catering gigs.

“Following food trucks is a lot of work,” Mitchell said. “That, to me, was like playing Pokémon or something. Where are they going to find you today? If you stay in one spot, people know where to find you.”

They settled on what they refer to as a hybrid restaurant. There are four picnic tables with covered seating, and orders are delivered promptly through the trailer window.

“Our slaw is just slaw; I don’t think Cole had anything to do with my slaw,” Mitchell said.

Wednesdays are for smoked chicken wings. Jo-Bawb’s is open until it sells out of barbecue, which happens almost every day in the afternoon or early evening. Friday and Saturdays are the busiest. All of the meat is smoked using pecan wood. 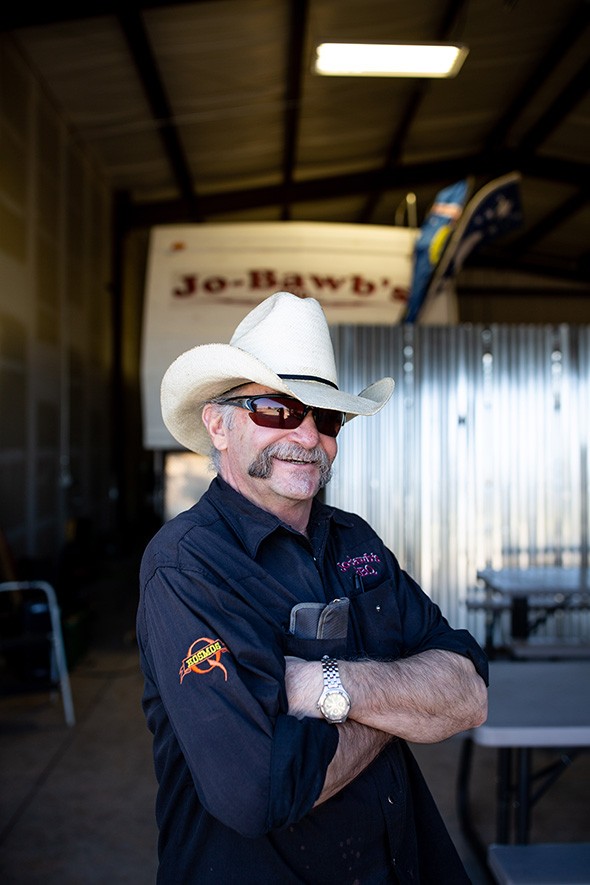 “It’s a mild smoke and a fruit wood,” Mitchell said. “We always scored cooking better with pecan. My theory is that a nice and mild smoke is easier to tolerate than a harsh smoke. … It’s not being injected or marinated or being enhanced. We put our rub on there and cook it to perfection. Some people say you cook it for many hours, but if it doesn’t feel right, it’s not done.”

They didn’t come out of the gates and immediately start placing in barbecue competitions. After a few trial runs with nothing to show for it, they started taking classes from accomplished pitmasters, including some in Oklahoma. The classes are tell-all, and Mitchell has now taught a few.

“Grandma can teach 10 different people your secret recipe and you’re going to get 10 different results, and a few of them might even be better than Grandma’s,” Mitchell said. “There’s no reason to hold anything back because they’re going to tweak it to their own liking anyway, and if you can help someone else, I think that makes you a master in barbecue, if you can pass that knowledge along to someone else. Those that say, ‘Oh, it’s a secret; I can’t tell you,’ I believe them people don’t even know what they’re doing.”

Every time the Mitchells would go out to eat and the front-of-house staff would ask for a name, Lon would give them a fake one.

“It’s none of their damn business what my name is, so I’d tell them that it’s Bawb, spelled B-a-w-b,” Mitchell said.

He wanted to add “Jo” to the name of the operation in honor of his wife, and he said the unusual spelling of Bawb makes people remember the name. It has paid off by building a customer base in Oklahoma City. Since opening October 2018, Mitchell said Jo-Bawb’s traffic continues to grow.

“If you have good steakhouse or barbecue, people will find you wherever you’re at,” Mitchell said. “We’ve built a good clientele, and we look at the numbers each month and we’ve got a third returning and two-thirds new. As long as we’re continuing to build on that, I don’t think you can go wrong.”