Romy Owens is a knitter.

Knitting is a steady, subtle art. The artist must evaluate each individual strand not only on its own qualities, its own colorations, textures and strengths but on how gracefully it complements the whole. If a strand is too dull, those surrounding it swallow its light; too bright, and the hue is shattered. An elusive discipline to master, it rarely deals in absolutes. The creator just has to see it.

Owens said she has been interlacing strands all her life, be them yarn or people. She has earned a reputation around Oklahoma for her own work — an imagined otherhood at [Artspace] at Untitled last year, for example — but might be best known for spearheading multiple collaborative projects, installations and exhibitions.

It is safe to say that whenever you see a group of artists coming together for a common theme in this city, Owens is probably involved.

“I get tremendous satisfaction from working with a community, and I always have,” said the 45-year-old Enid native. “Before I was an artist, almost every job I had centered around group dynamics. I worked with the Girl Scouts, did community outreach, worked at summer camps as a camp counselor. It even goes back to high school. I was always in student activities, student government, the president of student clubs. I’ve always been a leader, and I’ve always enjoyed pulling people together for a common good.”

Perhaps nowhere else and at no other time would her talents be put to better use than Oklahoma City in 2015. In a town teeming anew with creatives, Owens has been instrumental in facilitating some of the most unique collaborative art in the city and helping stitch together the tightly knit community in which her peers take so much pride. 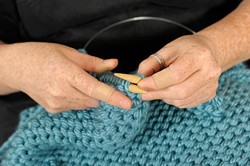 “I do think it’s nice that at this point in my life, it’s something I’m really good at,” she said. “I very much subscribe to the theory that all boats rise together. If I can play any role in helping us all rise, in keeping us unified, then I will. And I know I’m not alone. We’re part of a team.”

The Elaborate Collaborate at IAO Gallery this month and last year’s OKC125 photo exhibition — two teams she captained recently — might have “felt big at the time,” she said, but they’re nothing compared to her newest challenge: managing a squad of over 300 knitters trying to cover the facade of a Tulsa gallery.

“The knit bomb is ... the biggest thing I’ve ever done,” she said of the unbearable absence of landscapes, a project that will cover a 36x102-foot wall at Tulsa’s 108 Contemporary with of 8x8-inch squares created by hundreds of knitters. “I’m simultaneously lucky to be at the head of it and terrified because it’s so big. It’s like steering a giant ship; so much of it is just what the water is doing.”

Owens said that while the project is still approximately 1,600 squares short of completion, she has spent much of the past few months driving to every far-flung corner of the state in an effort to round up squares and recruit more knitters.

“I’ve been to Ada, Lawton, Woodward and Tahlequah repeatedly,” she said. “I was in Ponca City the other day. I go to Enid next week. I feel like I’ve done everything I can, gone to every small town, talked to every knitting group. It’s hard, but it’s been amazing.”

Her next collaborative project is a local one and promises to be just as memorable. The Secret Life of the City, scheduled to open Sept. 1 here in the Underground, features eight unique interpretations of Oklahoma City by eight artists.

Local artists and designers such as Dylan Bradway, Kristopher Kanaly, Jason Pawley, Sam Washburn and Erin DeMoss are tasked with creating a digital file that will then be transferred onto an enormous wheat paste poster, all without using any logos, lettering or recognizable images of OKC buildings or places.

“I chose these artists because they were designers or had design backgrounds or had a background in street art,” she said. “I really think they can explore the wheat paste idea in some interesting ways. I’m really excited about it.”

When asked about her own experiences as a full-time working artist, however, her tone changes slightly. The passion is still there, but Owens sounds more genuinely excited when she talks about facilitating collaborations than she does when discussing her own work.

After all, money makes the world spin, and Owens said that struggling month after month takes an inevitable toll.

“It’s so hard,” she said. “It’s just so hard. I saw my friend Nathan Lee post something on Facebook, and it said something like ‘They love your work until they have to pay for it.’ I almost started to cry. I’ve had this conversation with so many artists in this city. There’s just so much hustle to it all the time, and it’s emotionally exhausting.”

Conversations like that one might then beg the question, at least from logical people, Why keep doing it?

“It’s so rewarding. Unbelievably so,” Owens said as the light returned to her voice. “People love the art; they love the experience, so it’s really great to facilitate that.”

As for how she fills the necessary reservoir inside herself that all artists need in order to keep going, she describes a kind of perpetual motion loom that she has created.

“I am constantly inspired by conversations with my peers,” she said. “The more people I meet and work with, the more I know that something good is going to come of it.”

Print headline: Stranded, Local artist and collaborator Romy Owens weaves together a vibrant community with a little help from her friends.