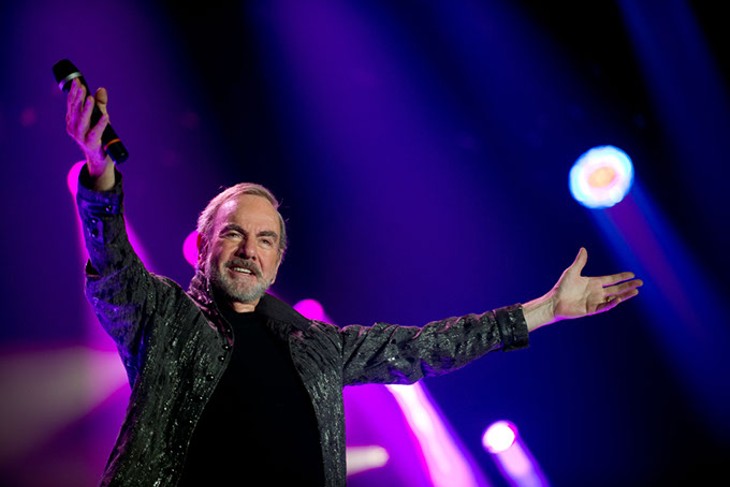 The 13 band members performed on the arena stage as the audience anticipated Neil Diamond’s grand entry to Sunday’s Chesapeake Arena tour stop. Brass instruments buzzed and backup singers wailed, but where was Neil?

The 76-year-old singer strolled in as the band launched into his hit “Cherry Cherry.” The audience was entranced, and remained so throughout his nearly two-hour set.

Even those who claim they don’t like Diamond’s music would enjoy his live show, because it brings a new energy and personal dynamic to his well-known repertoire. He’s honed his performance skills — this is his 50th anniversary tour, after all — and his band and backup singers also are impressive. The Waters Sisters, Julia and Maxine, are so vocally charismatic that they sound more like a chorus than a duo. Mixed with their salsa-inspired dancing and sweeping hand motions, they stole the show from Diamond a few times.

But he clearly doesn’t mind sharing the spotlight. Reciprocating the crowd’s enthusiasm, he told fans that he would sing to the section that made the most noise — and did so throughout the set.

The audience’s energy further swelled as Diamond transformed “Song Sung Blue” into a campfire-like sing-along with approximately 15,000 people. Even upbeat tunes like “Forever in Blue Jeans” gained more bounce and momentum as fans fed off the energy.

Highlighting his backing band’s brass section, he performed “You Don’t Bring Me Flowers,” which was originally performed with “my pal Barbra Streisand,” with a saxophonist as Diamond’s live duet partner. It was a creative approach to performing a duet without the original collaborator.

Diamond has plenty of “pals,” like The Monkees. He wrote the band’s hit “I’m a Believer” and gave it new life during his Easter concert. Diamond shook things up by changing lyrics like “when I wanted sunshine I got a thunderstorm.”

This is one of many unique additions to the songs his fans know and love. To introduce “Soolaimon,” which would make a wonderful Fifa World Cup song, the screen behind him displayed video of a rather terrifying New Zealand’s All Blacks rugby team psyching up before a game.

Even though this song could easily be an opener, it was performed near the end of his set. The show closed with “I Am...I Said,” and the crowd was shouting “Encore!” as soon as the last note played.

And an encore was inevitable, because no Diamond concert (or baseball game) is complete without hearing “Sweet Caroline.” Once it ended, Diamond rolled with the energy, declaring “one more chorus!” And after repeating the chorus, he and the audience even sang it again.

The show closed with “Brother Love’s Travelling Salvation Show,” with a message of love and acceptance. During the song, he even spoke to his fans, encouraging them to love everyone despite — and because of — their differences before he closed the night by wishing everyone a happy Easter.