Capitol Hill’s Coney Island wiener- in-a-bun shop has been serving them up red hot with chili, cheese and onions for generations. 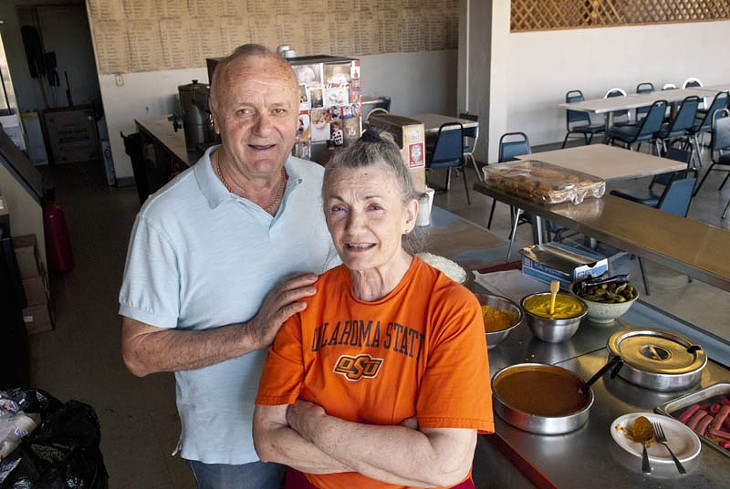 You don’t have to travel to Brooklyn to get to Coney Island.

Capitol Hill’s Coney Island wiener- in-a-bun shop has been serving them up red hot with chili, cheese and onions for generations.

Bill and Mary Mihas took ownership of the original downtown Coney Island, 428 W. Main St., in 1967. It was first established there in 1924.

“A Greek gentleman from our community sold it to us,” Mary Mihas said.

“Capitol Hill was a booming part of town when I got here,” Smirlis said. “There was John A. Brown department store, a movie theater, TG&Y and Otasco.”

“It was like a ghost town for a few years,” Mary Mihas said. “Then it started coming back. Mexican people began coming in, and it has revitalized the neighborhood. There’s more life here now.”

Coney Island has weathered the economic turmoil and demographic change, remaining fundamentally unchanged for decades. The blocks around it now are home to El Nacional of Oklahoma (bank), a grand old church with a new congregation, Bravo Ranch Super Mercado and a few other mostly Latino restaurants.

The Oklahoma Opry, 404 SW 25th St., where Wanda Jackson was hosting musical reunions in her home neighborhood as recently as 1998, has been shuttered for years. Coney Island is open every day except Sunday. Painted on the floor-to-ceiling windows is “The original Coney Island since 1924.”

Customers come to Coney Island from everywhere: “Enid, Norman, Moore, Midwest City and even out of state,” Smirlis said.

It’s undoubtedly a homecoming for many. Greg Burnett is the owner and operator of Riverside Speed Shop, 2219 S. Robinson Ave., a few blocks away from Coney Island. He’s a longtime observer of the district and its changing face.

“People who grew up in Capitol Hill come back for nostalgic visits,” Burnett said. “Coney Island is still a place to go have a hot dog that was around when they were kids.”

Mihas had fond words for an octogenarian customer who visits from Shawnee every month or so.

“I don’t think he’s married because he has a woman who takes care of him,” she said. “They eat here, and he brings a box of zip-lock bags and orders 52 hot dogs to-go, with two in each bag. We get a kick out of that.”

Coney Island’s menu has remained virtually unchanged during its entire history. A hot dog on a bun with chili ($1.40) is the hands-down customer favorite. It’s a red Schwab Meat Co.’s tube steak in that white bread roll. You’ll be asked if you want chopped raw onion on top, and grated cheese is a dime extra. A dime.

“When I started work here, a coney was 35 cents,” Smirlis said. “We do the best we can to keep the price down.”

“What I most enjoy is that I’ve been working here for so many years that the customers are my friends,” Smirlis said. “We tell jokes and have a good time.”

He pointed to a tattooed biker standing in line with a child.

“That guy was in second grade when he first started coming here,” Smirlis said. “He’s still coming and now bringing his own children.”

Some patrons drop in four or five times a week.

“We had an adult birthday party here two weeks ago, and the lady told me there were six generations present,” Mihas said.

The shop’s atmosphere is one of overall cordiality, unfailing politeness and relaxation.

“I like working here because of the people,” Mihas said. “My brother says I talk too much, but people enjoy it.”