Mike Montgomery has become a YouTube sensation with his woodworking, carpentry and maker videos. 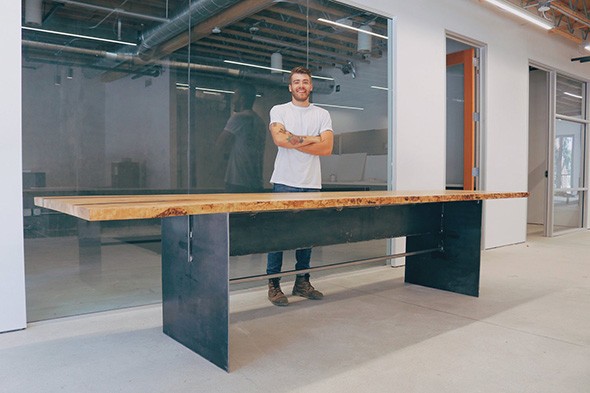 Starting his business at 19 years old, Midwest City’s Mike Montgomery grew the YouTube subscriber base for his Modern Builds channel to 902,840 in the past four years. Montgomery, now 23, has made his hobby of building furniture into a full-time business as a YouTuber with more than 100 how-to videos posted to the site.

He has always been interested in building and creation. As a young man, he watched as his parents built a house from scratch. As a kid, he would build landscapes for G.I. Joe figures or create Lego buildings.

Taking a shop class in middle school further grew his desire to build things and made him more comfortable with the idea of working with large tools. While his knowledge at that time was rudimentary, he said, “I could build some really simple things that were useful.”

Learning to build things served what Montgomery called “[his] cheap side,” as rather than run out to buy a gift or a piece of needed furniture, he could use his grandfather’s tools and scrap materials around his parents’ house.

Originally, he thought his career would take him into music production. That led him into classes at Academy of Contemporary Music at University of Central Oklahoma (ACM@UCO).

As he became more known for his building skills, he began to build items for his college classmates.

“I always had some kind of side hustle,” Montgomery said. “I just got engaged in building stuff, so it was kind of my hobby as well.”

While studying at ACM@UCO, he grew restless and wanted to start his own business. He learned many of the basics of production, and along the way, he learned how to do more extensive carpentry. He began watching do-it-yourself videos on YouTube and thought there was a niche in the mid-century modern design space that was not being filled. Perhaps, he thought, he could be the first. He created Modern Builds, figuring both words would also help him stand out in online searches.

And while some DIY channels on YouTube focused on elaborate creations, Montgomery wanted to aim for projects people who were new to the hobby could actually complete. 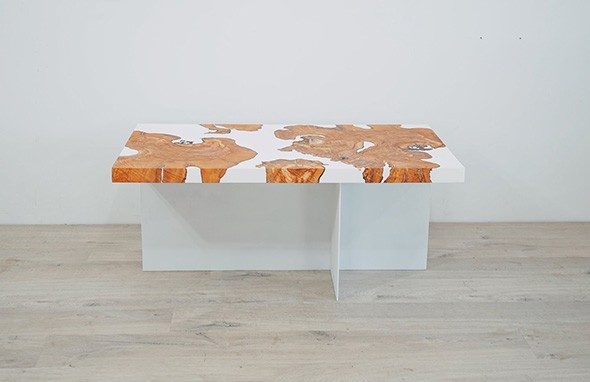 “Modern Builds is kind of geared toward people in their first year of making things,” he said.

His aim was originally to put out one video each week, and that growth on his channel was slow and steady.

“There was never, like, the breakthrough moment; I’ve never really had a video go viral,” he said. “It’s been a cumulative effort of consistently putting out good content, just slowly accumulating new audience.”

Montgomery said his focus is on teaching others how to make their own projects. While he has created many furniture items, he tends to use them himself or give them to friends or family.

“The product for me has always been the video,” he said. “I don’t have to sell my pieces, which really frees me up creatively.”

When he started, his goal was to get the videos out and build something consistently.

“At the beginning, it was very backyard, very DIY,” he said. “I was just setting up a camera, finding somewhere that had decent enough natural light, just setting a camera on a tripod and doing it.”

Now, he has multiple standing sets, including a living room and outdoor workshop.

“It’s all set up now and kind of standardized, which is nice,” Montgomery said.

As he continues to grow his fan base, he would like to focus on even bigger projects. Currently, he said, his room renovation videos are among his most popular, and at some point, he would like to attempt renovations on an entire house. Relatively inexpensive real estate in Oklahoma makes taking on a larger-scale project more affordable.

While he has had meetings about taking his skills to television or other mediums, he is focused on his streaming channel. For one, it is more lucrative.

“If I landed a first season of a TV show, I’d be taking a pay cut to do it,” Montgomery said.

For another, he has a great degree of control over how and what he does each day.

“I just go out to the garage, I film myself building stuff, and I put it on YouTube,” he said. “It’s a really silly thing when you look at it that way, but it’s a lot of fun and I’m really appreciative to get to be creative and not have to be in a cubicle or do something that I really don’t like all day long.”

Montgomery said the maker community is growing, and while people who wanted to build things would just do so alone in their garage for years, the growth of an online community of makers has made DIY more accessible.

The DIY community online has been welcoming, and he has made friends through his time working on his videos. He hopes to travel around the United States in the near future, meeting others in the DIY community and working on projects together.

Montgomery bought a school bus that he hopes to turn into a kind of tiny house to stay in during his tour. He thinks having his home base on wheels will give him more time to absorb the feeling of each community he stops in.

“I have the freedom to travel and do some cool stuff, so I definitely want to do that,” he said.

He also has another milestone in his sights.

“I’m really looking towards getting a million subscribers,” he said. “It seems insane to me to have that many people following what I’m doing.”