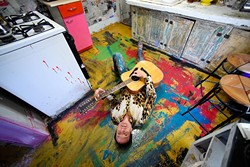 On this particular day, he blazes into the coffee shop a few minutes late, a flurry of apologies. He’s concerned about being an inconvenience, but he never is. He’s gracious and courteous and an engaging conversationalist.

Wearing an Andy Warhol T-shirt under a blazer with jeans and driving moccasins, he could almost pass for a hipster dad headed to his middle school carpool in a snappy little silver BMW.

But those moccasins are the giveaway. They are covered with bright paint spatters, evidence of the longtime musician’s most recent avocation.

“When I paint, I’m inspired by Jackson Pollock, but my style is much more aggressive. I run at the canvas, throwing paint. I injure myself,” he said as he rolled up a pant leg and showed a fresh welt. “It’s kind of like primal scream therapy with paint.”

These days, Meade is a prolific visual artist, and commissions roll in faster than he can produce paintings to fill them. His management team is in preliminary discussions about a potential art show at Six01 Studio, a Los Angeles think tank/art gallery owned by a group of his admirers (who also happen to be music and movie producers).

“I like to paint large, like 8 feet by 9 feet,” he said. “[Painting is] new enough to me that I can’t manage the process like I can with writing songs, so it’s at once both frustrating and liberating. I start layering in one section and build and add until I know I’ve got it.”

The Six01 Studio show is tentatively set for this fall, and if it happens, he hopes to feature 20 of his works.

The other thing about Meade is that he is widely considered a godfather of alternative rock.

His bands Defenestration and, later, Chainsaw Kittens were among the first to create a compelling, hybridized sound that borrowed from everything that came before it.

As a musician, Meade influenced a generation of acts including The Flaming Lips, The Smashing Pumpkins and Nirvana. Pumpkins frontman Billy Corgan was a Kittens fan, and Nirvana frontman Kurt Cobain was shaped by Defenestration.

For all of these reasons and more, Meade was recently told that he will receive this year’s Gazette Music Awards Lifetime Achievement award. In his typical, charming, self-effacing fashion, he expressed both humility and humor.

“I’m just really happy to get an award,” he said. “I was so excited [to hear I won something] that I didn’t even ask specifically what it was for or why I was getting it. I just thought, ‘Wow! That’s great!’ and said yes.”

Born in Bartlesville, Meade is the youngest of five children. His parents didn’t plan to have more children, and Meade described his conception as a happy accident. And in a way, the surprising but cheery happenstance that surrounded his entry into the world also propelled him through several continents and multiple careers. He eventually landed back in his home state and lives in a modest, paint-splattered bungalow in Oklahoma City.

For a while, he worked for a major ad agency in New York City. He hated the job and quit. His most seemingly incongruous incarnation was as the headmaster of a boarding school in China, which he said he absolutely loved.

He worked there three years before making a move to Saudi Arabia, where he taught English. A “slightly scary” situation there ultimately helped catapult him back home and back into music. He also started painting, which he said both exercises and exorcises his mind.

“I’d thought — for whatever reason — that music wasn’t something I could do forever and that I’d have to do something else when I got too old to play music in a band,” Meade said. “When I was little, I wanted to work as a headmaster at a boarding school on the East Coast, and that’s what I did, only it was the real East Coast, as in China.”

The other catalyst that propelled him (thankfully) back into music was one of his students in China who goes by the moniker Haffigy.

“When I was headmaster of the school, I had a student who would come into my office and ask me lots of questions in English,” he said. “I thought he just wanted to practice his English, but one of the teachers told me that he was also an accomplished violin player. I asked him to play for me, so one day, he brought his violin and played. It was magical.

“I had stopped doing art at that time. My heart knew I was just marking time until my head got past the idea that I had to give it up and have a career. I wrote a song for my student to play, and little by little, I came back to it.”

Meade is working on a new album, Robbing the Nuclear Family, which he plans to finish mixing this month in Los Angeles and release this fall on vinyl and iTunes. He said the project isn’t meant to be political in a Pete Seeger sort of way — “I don’t want to be that guy,” he said — but it is a statement about the dastardly ways the far-right wing has usurped the right to define what a family is and who should or should not be allowed to marry and have one.

“It’s just my worldview,” he said. “It’s a view I’ve developed from living all over the world. I’m not trying to be overtly political; I’m just speaking from my personal experiences.” 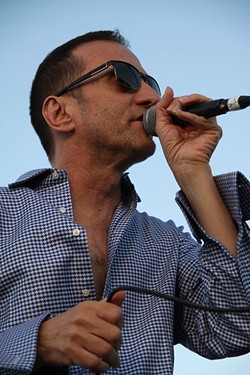 “Of course, I’m thrilled, flabbergasted and immensely touched to receive this award. People who know me know that I have somewhat marched to my own drummer since my first real band, Defenestration, emerged at our first show in Norman in 1982 at Sooner BBQ. The quirky pop band that could barely play (and that’s being generous) our instruments playing with a handful of hardcore punk bands that could barely play their instruments. Some years later, and with dogged determination, that ragtag group of guys — give or take a few members — made a seven-song record in 10 hours. It went on to top college music charts on the East and West coasts. At age 22-23, I had arrived, or at least I was at the door to the cool kids’ party. ‘Really, what does this have to do with the award? And really, what does this have to do with anything?’

“Well, at that time, we always had some sort of hometown love being thrown at us, which made living on no money and playing for no people in other states and breaking down in Ohio for three weeks with no money manageable. As time went on, the hometown love grew instead of dissipated. People outside Oklahoma were shocked that we claimed the state as our home because Oklahoma was looked upon as being uncool. The whole time, we knew different because the people here are some of the best people anywhere, and that’s coming from someone who’s lived all over the world.

“I am incredibly proud of my Oklahoma heritage.

“By the time Chainsaw Kittens (my second real band) came along, we got tons of attention all of the time by the Oklahoma media, specifically Oklahoma Gazette. Through the years, the Gazette has followed and championed me as the driving force of the Kittens and as a solo artist.

“As an artist, be it painting, doing music, writing or whichever form I am using to communicate, I’m trying to, in some small way, express something inside myself that I often don’t even understand, and I have to paint it, write it or sing it to work through it. What I love about Oklahoma, my fans and Oklahoma Gazette is no one has ever put me in a box or expected me to be linear and everyone has embraced all of these artistic avenues I use. When I went off to China to run a boarding school and let my art incubate inside my soul, everyone accepted this as something natural for me.