Radney Foster, one of the most lively Nashville-based songwriters in a city full of them, was wide awake at 9:30 a.m. for a phone interview with Oklahoma Gazette, far earlier than the interview times scheduled by most other night-dwelling musicians who are not located several time zones away.

But it wasn’t an inconvenience for Foster, a longtime singer-songwriter also known for penning tunes other artists made hits (like Keith Urban’s “Raining on Sunday”). His day started hours before, getting his kids ready for school.

“I lead this crazy split life,” Foster told Gazette, “because when I’m on the road, I don’t go to bed until 2 in the morning, and then when I come home, I’m a dad.”

The rollout process for See the Stars has been a unique experience for Foster, who released his solo debut Del Rio, TX 1959 in 1992. In addition to playing his normal slate of theater and listening room gigs, his book publisher also has him doing bookstore readings around the country.

When the album and book first came out, he toured with about three readings and three playing gigs each week. After six weeks, he knew they needed to work out another arrangement.

“I told my book publisher, ‘We’ve got to do something different because I’m not seeing my family at all,’” he said.

Now Foster designates one week each month to do nothing but book promotion. It works a lot better with his existing work and home schedule.

Each bookstore reading Foster does is promoted on his website in the same way as his concert dates. Usually about half the people who show up for the events are his hardcore music fans, some of whom might not be accustomed to attending free author readings.

“People started calling the bookstore like, ‘How do I get a ticket?’” Foster said.

Though his appearances at The Blue Door will be musically oriented, Foster does plan on reading a few passages from his new book as well. He has played the listening room many times in his career and said it is one of his favorite spots in the country.

“There’s a vibe there that’s really cool,” he said. “The audience is always really respectful. You can hear a pin drop when you’re playing or telling a story, but they tend to explode when you’re done, if they really liked it.” 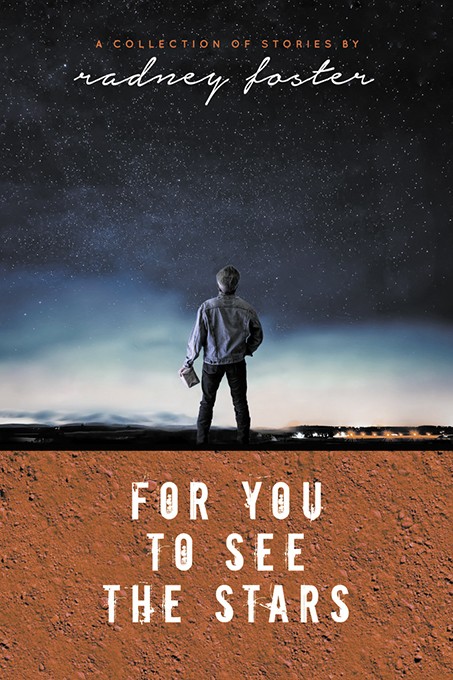 About three years ago, Foster came down with cases of pneumonia and laryngitis so bad that it was totally impossible for him to travel and sing — much less speak even a few words. The sickness did more than rob his fans of shows; it threatened his source of income.

“That’s an existential crisis for a guy like me,” he said. “I was pretty freaked out by it.”

His voice was completely gone. To communicate with his family, he had to write out messages on little pieces of paper. Foster, during his sickness, spent a lot of time thinking about the music he was working on and writing personal notes to himself. One day, he realized that one of the unreleased songs he wrote might make a good short story.

On a sheet of paper, he wrote out the thought to his wife, saying that he thought he’d write that in part to keep from going crazy lying in bed. His wife, instead of giving him a vocal answer, took the pen and jotted down her own response.

“She wrote on the little piece of paper, ‘You should, because you’re driving me crazy!’” Foster said.

There is a corresponding short story for each song on the album, including a re-recording of “Raining on Sunday.” Some songs inspired stories, and some stories inspired songs. The writing process, Foster said, was one of the most intensive he has experienced.

Technically, this is Foster’s first published work of fiction, though it could be argued that albums qualify as published works. Foster has been a journal writer since his college years and wrote prose through that outlet for decades.

“I recommend it for anyone who wants to work creatively with words,” he said. “If you’re a singer-songwriter, I just think your songwriting will get better. It certainly helped mine. You get to play around with things before you’re worried about whether it’s going to be a song.”

Foster does not consider himself the biggest hip-hop fan, but he recognizes good songwriting when he sees it. And that is exactly what has given him such respect for rapper Kendrick Lamar.

“The To Pimp A Butterfly record is an absolute piece of art,” Foster said. “It really is.”

In the ongoing discussion on the artistic merits of songwriting as opposed to creative prose, proponents will frequently point to Bob Dylan’s 2016 Nobel Prize in Literature and Lamar’s 2018 Pulitzer Prize for Music as institutional validation.

Foster said he never considers the debate on songwriting “too eggheadedly,” but he does think the awards were not only deserved, but past due. Lamar was the first artist outside of the classical or jazz realms to win a musical Pulitzer.

“I’m sure it took those Pulitzer folks a hell of a long time to get around to jazz,” he said. “And what was that argument like back when they were giving it to Art Tatum or John Coltrane?”

For the record, the first non-classical Pulitzer was awarded in 1997 to Wynton Marsalis’ jazz oratorio Blood on the Fields. The prize was first presented in 1943.

Foster said it is hard to compare songwriting to writing a fictional short story, mostly because there are certain strict forms and functions a song is expected to fulfill. But at the same time, a well-crafted message is just that, no matter how it is delivered.

“I like to feel like I’m a storyteller,” he said. “And if I’m going to tell a story with chords underneath it, I’m going to treat the chord structure and the lyrics with respect.”