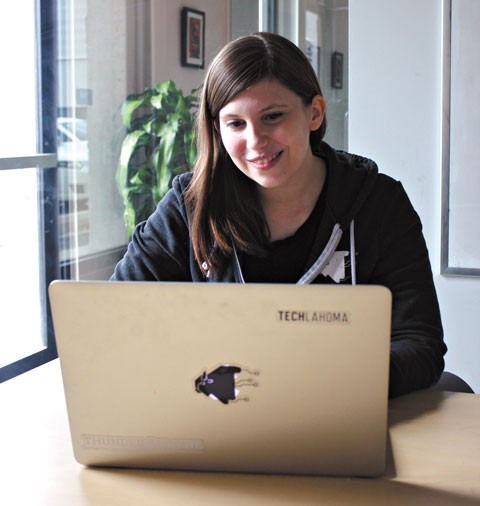 In the early days of Twitter – one of the world’s most popular social networking sites – there were no @ replies, no retweets, no hashtags and no photos. In February 2008, when web-based application TwitPic went live, Twitter users began to point, click and share their life through photos.

As TwitPic came to prominence, founder Noah Everett arrived at okcCoco — Oklahoma City’s first co-working facility — for Open Beta, a conference attracting the city’s small but growing tech community. Soon after Everett began presenting, a wave of astonishment swept over the crowd, said Tommy Yi, one of the co-founders of okcCoCo.

“People assumed that TwitPic was out of Silicon Valley,” Yi said. “Noah Everett was a 24-year-old kid who lived in Tulsa, Oklahoma, and built TwitPic with two of his friends in Oklahoma City. TwitPic was an Oklahoma company, and everyone in the world was using it.”

The okcCoco space opened shortly before Everett’s speech in 2009. Reaction was mixed, mostly because “people didn’t think you could do tech startups in Oklahoma,” Yi said. Such was the impetus behind the co-working space, which strived to encourage more startups and entrepreneurs, as well as keep talent in the Sooner State.

Nearly a decade later, OKC has come to embrace the startup culture and is now a thriving ecosystem for entrepreneurs. Not only does OKC have the big-name tech companies like WeGoLook, Spiers New Technologies, Paycom and more to show for it, but also signs show that the tech cluster is here to stay.

“Five years ago, it didn’t exist,” said Yi from StarSpace46, his third co-working space for OKC. “Now, we have tech companies people look up to here.”

Located west of downtown OKC, StarSpace46 serves as a hub for small startups and strives to be a “digital bridge” connecting OKC with other tech communities in the state through its close ties with Techlahoma, a nonprofit supporting the tech community. StarSpace46 members vary from individuals with a laptop and an idea leasing a desk to established companies leasing suites like Go Engineer, a 3D printing resource, and Nodecraft, which began as a server-hosting company for the popular game Minecraft.

“They all could have easily made the choice to leave Oklahoma, but they didn’t,” Yi said speaking about startups sharing space at StarSpace46 as well as other local tech-based companies. “I think they are passionate and believe that Oklahoma City has all the makings of what could be the next major tech city.”

OKC is far from becoming the next Silicon Valley, home to the world’s largest high-tech cluster and trendsetters like Apple, Facebook and Google.

There is, however, an emerging tech hub in OKC and Tulsa that shares characteristics similar to Silicon Valley, explained Scott Meacham, president and CEO of i2E, Inc. As the leader of a statewide nonprofit responsible for supporting technology-based startups, Meacham contends that OKC is entering the era of the “high-growth entrepreneur.”

“There’s a cluster emerging,” Meacham said. “If you want a big example, go to Paycom, which started out as nothing and has exploded into a huge company. Then, there is WeGoLook, which grew up to be bought by the largest claims company in the world. The question is why? Why are these successes happening here? I think one is infrastructure.”

OKC can lure tech companies, as well as keep startups local, with its lower cost of living and a talent pool fed by nearby colleges. Another factor adding to  OKC’s small tech boom is the city’s current renaissance, which connects to the major MAPS projects. Now, OKC has emerged as a culturally vibrant place where affording a home and raising a family are possible, but so is starting a business.

This coming January will mark six years of the Oklahoma City Javascript Usergroup started by Vance Lucas and Jesse Harlin as a way for those fluent in the high-level programming language to come together but also encourage others to learn.

“If you wanted to learn tech, it felt like a wild garden,” said Amanda Harlin, an early volunteer in the group who later married Jesse Harlin. “We were kind of nerdy people but weren’t in the industry. How do you get started? How do you go for jobs? How do you negotiate? What is a fair rate? We had all these questions, but we didn’t have a community.”

More than 70 people attended the first meeting, hinting to the founders they were on to something. Three years later, Techlahoma launched as an organization providing mentoring and support and creating a central learning hub for the city’s tech community. From inside StarSpace46, Techlahoma oversees 33 user groups, which meet on topics like HTML, open source software and JavaScript. While all groups’ welcome beginners, some are specifically tailored to females interested in tech, like SheCodes and Django Girls.

“I’ve seen a lot of developers who were good. Now they are really great and competing for contracts and tech gigs with coastal companies,” Harlin said. “The way we think about ourselves has changed. We don’t see ourselves as rinky-dink. We are competing. Some people like to call us Silicon Prairie. We don’t need to be Silicon anything. We can be the best of us.”

OKC’s flourishing tech community is rooted in the state’s long history of producing entrepreneurs and innovative ideas, like the shopping cart, parking meter, voicemail and more.

“The spirit goes forward,” Meacham said. “We tend to be independent thinkers. We tend to be the kind of people who roll up their sleeves and fix the problem.”

At StarSpace46, Yi hears innovative ideas every day. What’s to come from OKC’s tech community wouldn’t likely be the next Snapchat or dating app, Yi said. Instead, he expects new technologies for oil and natural gas, alternative energy and agriculture.

“I think what Oklahomans are really good at is using technology to solve problems in our own backyard,” Yi said. “We can solve these issues and make a greater impact than a swipe-left or swipe-right app ever would.”