Ryan Cristelli shares the story of john, one of our oklahoma city neighbors. 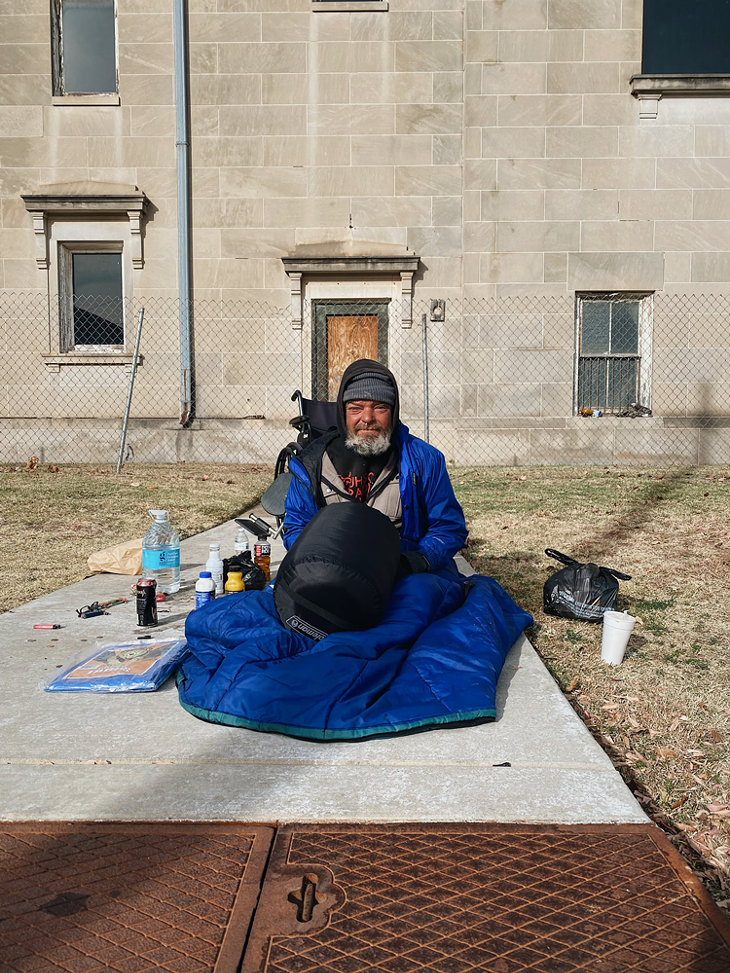 This is John (pictured earlier this winter), and he’d spend last Saturday night in the hospital.

John exists on the south side of an abandoned Midtown church. His presence is symmetrical. He sits immobile and centered on a paved walkway that runs due north into a chain link fence. A smattering of blankets surrounds his lower body almost like a twisty cone melting into a puddle.

I’ve checked on John four times in the past months. I’ve given him everything the project has to offer. His sleeping bags have been stolen. I change his socks when he lets me. John’s right foot is partially amputated, severed at the midway point creating a club-like nub. Last February’s cold took his toes and much of the feeling in both hands.

From the trash that surrounds him, you recognize that the neighborhood provides in some fashion. Empty bottles of water and cheap whiskey, plastic cigar filters, paper bags of cold french fries and half-eaten muffins pepper the surrounding concrete. His wheelchair rarely upright. When I ask about his life, he tells me about a failed marriage and being misunderstood.

“Ryan, whether it’s my life or in the damn wheelchair, I’m just trying to land as softly as possible. You know … A controlled crash.”

Early Saturday morning, I’d check on him again. I didn’t want him to be here. He was. He was sitting in his spot, shivering under saturated blankets. Snot and rainwater were frozen to his beard. There was a fruity fermentation on his breath. He’d sat in that rain and sleet and cold. He is a human being, and he is dying in real time. In plain sight.

Behind John was a used, boxed tent. Kenny and I would unzip the box and do our best to shove the poles into the wet-but-quickly-freezing ground. The stakes did not make the journey to John’s slab of earth. He would tell us about his fear of being blown away, and I’d do little to help his anxieties.

“John, your tent’s being put up by two avid INdoorsmen. I’m worried about that too.”

Eventually, the tent would stand servicably, and I’d fill the rascal with 8 pairs of wool socks, hand warmers and a new (and dry) zero-degree sleeping bag.

“John, I need to put you in this tent. I’m going to lift you like a forklift.”

He’d grumble and eventually agree. Kenny and I would remove the layers of damp blankets to reveal two, twig-like legs in wet blue jeans. I’d lift him, and the smell and sight of urine and feces was immediate. In two bursts, I would drag him into the tent, parallel to his new sleeping bag.

“John, I’m going to need to change your socks.”

I could see that the damp, half-frozen socks were the very pair I’d changed a month earlier. And I knew this would be bad. I’d lift his left leg and peel back the top sock. Milky-white layers of his ankle skin would follow the sock, peeling-and-rolling into balls, falling into my hands and onto the tent’s floor. The smell of infection was immediate and piercing. Removing the layered sock beneath took with it jelly-like portions of his remaining toes and patches of his foot’s padding.

“Well, I do care, John. And I’m getting dry socks on your damn feet.”

I would and do the same for his partially-amputated foot. I’d pass his new bag through to the tent’s opening. Kenny would shake the skin from the down layers and use a dry towel to wipe up the urine. John would ask if I could help him light a cigar. I would.

“If I light this cigar, you stay in this sleeping bag. My wife’s going to be furious that I lit your stogie…but that’s a fair trade.”

We’d performed triage, and I’ve never felt more useless. I’d later wash his skin from my hands in a gas station restroom and call 911. Project Winter Watch has given out approximately 2,400 zero-degree rated sleeping bags and countless thousands of wool socks, Thinsulate gloves and hand warmers. It’s been four years, and this was the first time I’ve called for emergency services. I was certain that John would die that night. He’d be found lifeless on the pavement that next morning. And that wouldn’t work.

After Sunday’s give at Feed His Sheep, I headed back to John’s slab. The tent was partially collapsed, and his sleeping bag was exposed and covered in snow. I kneeled next to the mess and peeled back the bag’s flap. He was not there. His wheelchair was gone, and I knew he’d been admitted. I felt better but not good. I don’t know if this registers as a win, but I know this: Project Winter Watch showed up. We were there, and in these moments, this is exactly why we exist. We see them. We make the stop.

As punishing as it may be, our collective must try to imagine what it’s like to be in the skin of our unhoused neighbors and we must act. What are the forms of love that best constitute our humanity? I’d suggest acts of selfless love and sacrifice. So, we’ll keep on along with the many others working in the service of our neighbors. We’ll provide for them, as well. It is the givers to Project Winter Watch that power our mission. It is you that makes this work. It is all of us that reject the notion that some are not worthy of our love, attention and tangible care.

As we work towards changes and more permanent solutions, it is our collective non-negotiables that save lives.

P.S. A young woman stopped by during the fray and provided John a new jacket, sweatpants and a cup of coffee. I’m certain this wasn’t an isolated circumstance for her. She was wonderful. Her name escapes me. If this was you, please respond or write. You were amazing.