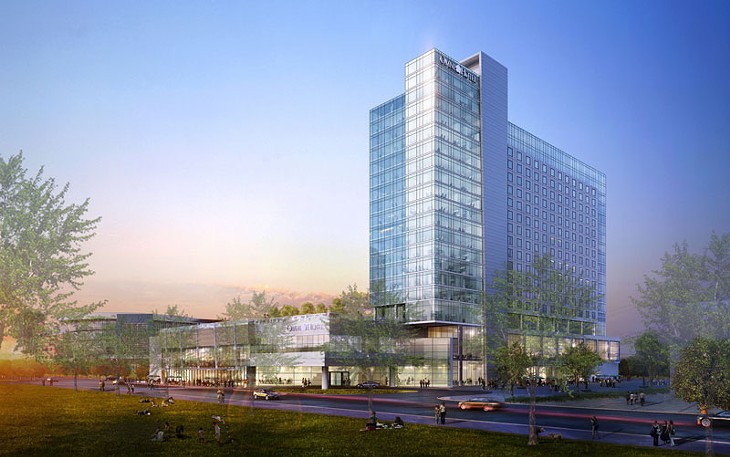 In late 2009, Oklahoma City voters approved a sales tax initiative to fund a variety of quality of life projects, including a new convention center, through the MAPS 3 proposal.

Now, the city is investing $288 million into a facility with a 200,000-square-foot exhibit hall, a 45,000-square-foot meeting space and a 30,000-square-foot ballroom. The convention center, located in an area that stretches from SW Fourth to SW Seventh streets between S. Robinson Avenue and S. Shields Boulevard, is expected to open before the end of the decade.

While negotiations between the city and Omni officials are just getting started, estimates from the luxury hotelier suggest a $235.5 million, 600-room convention center hotel is coming to OKC. Omni could request $85.4 million in public money toward making the hotel a reality.

With the city potentially investing millions of taxpayer dollars into a private project, it begs the question Will Oklahoma City see the return it’s after?

It’s a question mulled by Ward 2 Councilman Ed Shadid, who raised concerns and believes taxpayers weren’t fully told a subsidy would be required to attract a headquarters hotel. Shadid hosted Heywood Sanders, a professor at the University of Texas at San Antonio and a leading expert in convention centers, at a town hall event two years ago.

Sanders made similar comments during his Oklahoma City visit in 2014 and in his book Convention Center Follies, which mentions the city’s quest to build a new center. While cities have embarked on an arms race of sorts to build convention centers, Sanders said, the business isn’t there to fill the space.

Large conferences like those of The American Dental Association have slipped in attendance numbers. A 2006 conference in Las Vegas brought out 40,220 dental workers, but just over half that attended last year’s conference in the nation’s capitol, Sanders said of his research.

Survey results from Meetings & Conventions, a magazine for event professionals, paint a brighter future for OKC’s convention center future. A majority of survey respondents reported their budgets for conventions and meetings increased from 2015 to 2016 due to large attendance. The survey also found that a hotel was the top reason for selecting a convention site.

Visitors to both facilities will plug money into local restaurants, shops, attractions, transportation and more. Originally, experts suggested OKC would require a 650- to 735-room headquarters hotel, but Omni has suggested 600 rooms, O’Connor said.

Beyond the money coming from out-of-towners, O’Connor sees a convention center hotel serving residents through the restaurant offerings and meeting space for events.

“[Omni] really goes to a great deal of effort to learn about the communities they are in, and they will develop a property that is uniquely Oklahoma City,” O’Connor said. “Their restaurants in their other properties are very popular destinations. I hope we will see that, especially since it will be across from the new park and become a place where people stop in for the restaurant or the coffee shop.”

Negotiations are expected to wrap up next month with an offer presented to the council, which will have to decide how to fund a subsidy. Options include public borrowing, increasing the hotel-motel tax, initiating a rental car tax or financing through tax-increment financing, known as TIFs.

“It is going to take several of those money sources to come up with a sufficient amount of money to fund through public participation,” O’Connor said.

Print headline: Convention future, The success of a convention center is measured by its ability to generate economic benefit for the city. Will a hotel assist?