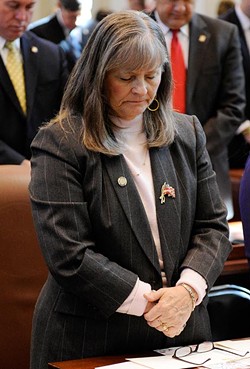 In an era of legalized same-sex marriage in Oklahoma and increasing acceptance for LGBT rights, leaders of the anti-gay movement continue to push back and attempt to invoke the safety of children in their efforts.

While promoting her bill to protect same-sex conversion therapy for children, Rep. Sally Kern, R-Oklahoma City, who has become one of the state's loudest critics of gay rights, stated in a House committee meeting Tuesday that over 40 percent of same-sex persons were sexually abused as a child, attempting to draw a link between sexual abuse as a child and same-sex attraction.

However, the American Psychiatric Association states that there is no scientific link between abuse as a child, or upbringing, and sexual orientation. Further, the APA states, “All major professional mental health organizations have gone on record to affirm that homosexuality is not a mental disorder.”

House Bill 1598, which was passed out of committee Tuesday, protects the rights of parents to seek conversion therapy for their child. Kern admitted that the right currently exists in Oklahoma and churches are protected by the U.S. Constitution to teach conversion. But her bill is an effort to preemptively fight the anti-conversion therapy movement seen in other states.

Not only did Kern draw links between sexual abuse and same-sex attraction, but Rep. Pam Peterson, R-Tulsa, also claimed HB 1598 could help take sexual predators off the street.

“There were many in the homosexual community that were abused as children ... and maybe the parent didn't know [because] the child didn’t feel like they could talk about it,” Peterson said. “What I proposed to some of the opponents to this bill is what if this parent is seeing a different characteristic in this child, [like gender identity], because of a sexual abuse situation that may not be discovered? This family says, ‘I am going to take you to counseling for gender identity counseling.’ From my perspective, I thought we might be able to discover an awful person out there who is abusing a child because the symptoms [of that abuse] are coming as a gender identity [problem].”

“Every mental health association that is actually credible has not only come out against conversion therapy but also this legislation,” Stevenson said.

Stevenson said he also feared the bill sends a harmful message not only to youth but to the entire nation.

“I think it sends a message to our entire community that certain legislators in Oklahoma are vindictive,” said Stevenson, who is hopeful the bill will not be heard on the House floor.

Kern’s attempt to link same-sex attraction and harm to kids is not a new tactic.

“Depicting gay men as a threat to children may be the single most potent weapon for stoking public fears about homosexuality,” wrote Evelyn Schlatter of the Southern Poverty Law Center in a report highlighting multiple studies that show gay people are not more likely to sexually abuse children than straight people.

“The Child Molestation Research & Prevention Institute notes that 90 percent of child molesters target children in their network of family and friends, and the majority are men married to women,” Schlatter added. “Most child molesters, therefore, are not gay people lingering outside schools, waiting to snatch children from the playground, as much religious-right rhetoric suggests.”

For Kern, HB 1598 is a way to fight back against a culture she views as disruptive to Christian family values that preach an anti-LGBT message.

“In our schools and our movies, the kids are being pushed in a direction that they are born homosexual and can’t change,” Kern said. “I don’t think that’s true.”