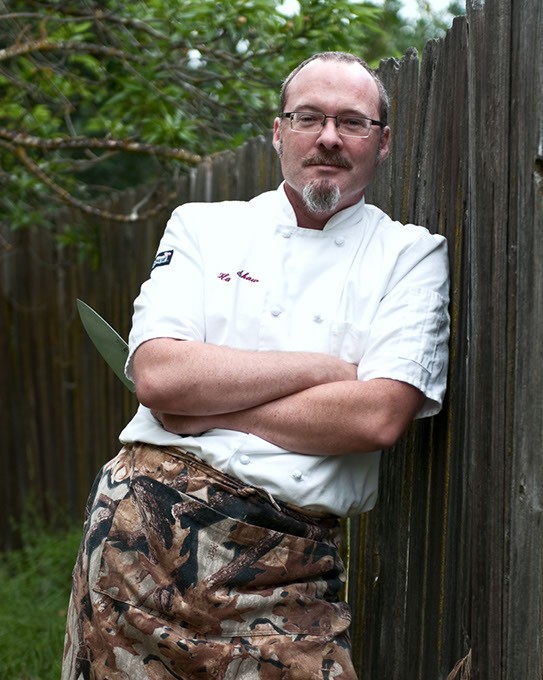 Hunting for his own meat was the final step in a journey Hank Shaw began as a young boy with his mother.

He came to the sport of hunting at age 32 after a friend from Minnesota gave him a needed push to “complete the cycle” of becoming wholly self-reliant.

“We are the only species on earth that doesn’t know how to feed ourselves,” he said. “If the grocery stores and farmers markets went away tomorrow, how many people would be able to fend for themselves?”

“I’m not a doomsday prepper or anything,” he said. “It’s really about the core competency of being a complete human.”

He hasn’t purchased meat in 11 years. Instead, he eats what he can hunt, grow or forage with the seasons.

There is a kind of meditation to breaking down hunted quarry, Shaw said. Animals are all generally built the same, so preparing one four-legged mammal isn’t that different from another. It’s work he did as a restaurant cook years ago, but it’s more meaningful now.

“When you get to a larger animal, like a deer, the cool thing about butchering it — this may sound macabre — it’s like opening a present,” he said. “The process of going from animal to meat is very zen. It finishes the hunt.”

“Mom taught me how to fish and about edible plants in our area,” Shaw said. “She thought it was very important for her children to know the names of things.”

That sense of discovery was integral to the research and writing of Buck, Buck, Moose, he said.

Most people are “green blind.” They look at the world around them and don’t differentiate one plant from another or know what kind of tree is in front of them or what type of berries grow from different bushes.

“One of the most exciting things about the book for me is its global nature. Every culture around the world eats something like deer or has a history of it,” he said. “That is fascinating.”

Shaw said his wild game recipes were drawn from around the globe, giving the book a more interesting palate of flavors. One came from his banker, Omar, who told him about gazelle hunting in the eastern deserts of Lebanon. In Hokkaido, Japan, hunters find the same kind of deer that run wild in Alaska.

“There are whitetails all the way to the Andes and Yucatan,” he said. “A great deal of these recipes are from the countries of origin.”

“They cooked one of the best meals of that entire tour,” he said. “We came back again in 2013 to do a dinner for [my second cookbook] Duck, Duck, Goose: The Ultimate Guide to Cooking Waterfowl, Both Farmed and Wild.”

Tuesday’s dinner is a collaboration as the chefs prepare their takes on recipes from Shaw’s newest book.

“Those guys know what they’re doing,” he said.

As fun as it is to experience their interpretation of his dishes, Shaw said the book was not written for chefs.

“All the recipes were tested by regular people at least three times,” he said. “I didn’t let chefs anywhere near my recipes.”

Buck, Buck, Moose provides readers with well-tested, accessible recipes that go beyond the basics. Wild game steaks are delightful, but he said that’s a minor portion of the animal. His book addresses the unusual cuts and gives step-by-step instructions on preparing parts that are less frequently used, including offal, or internal organs and entrails.

“There are already 14 million deer hunters in the U.S., and double that for what I call the ‘venison diaspora,’” he said. “If you’re a big game hunter, you’re not going to be able to eat more than one big elk a year. You have to find an outlet for that venison.”

Buck, Buck, Moose author Hank Shaw said the recipes in his book also work well substituting buffalo or grass-fed beef instead of freshly hunted venison. For those interested in trying the dishes with venison, it’s available for purchase from several metro butcher shops.

whole deer By appointment only oklahomafood.coop/honey-hill-farm 405-341-5499