Every 30 minutes at the party, COOP releases another beer. Some are vintages of past years’ releases, Jarolim said.

Throwing an anniversary party for COOP Ale Works is hard, expensive work, but it’s worth every minute and penny.

“We give away beer,” said head brewer Blake Jarolim. “We give up 12 hours before the party to prepare and 12 hours after the party to clean up.”

“At some point, we had responsibility questions about a 12-hour free-for-all,” he said.

There will be a lot of beer poured that day. Every 30 minutes at the party, COOP releases another beer. Some are vintages of past years’ releases, Jarolim said. A few are one-off, special beers just for the party.

Even as the brewery has expanded its reach, with COOP beer sold in Kansas, Nebraska and Arkansas, Jarolim said it is still a small craft operation.

Each can of F5 IPA should taste like the last, but the crew still finds plenty of time to play around with new flavors. Using a pilot system — a souped-up version of what home brewers use — COOP is always turning out small batches of beer to find new recipes. 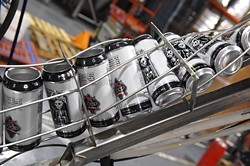 “It’s a real challenge to make flavorful beers at that alcohol range,” he said.

Lower-point beers also open up options in the taproom, where customers can pick up crowlers (COOP’s version of growlers) of beers infused with peppermint, habanero, mango, cacao and other flavors on a rotating basis.

Food trucks La Gumbo Ya Ya, Kaiteki Ramen and Twist Gourmet Pretzels will be onsite for those who prefer not to drink on empty stomachs.

The brewery is lucky to have come along when it did in Oklahoma City’s renaissance, Jarolim said.

“I’m very grateful,” he said. “Support from the community means 12 people get to make beer for a living. For me, that’s pretty cool.”