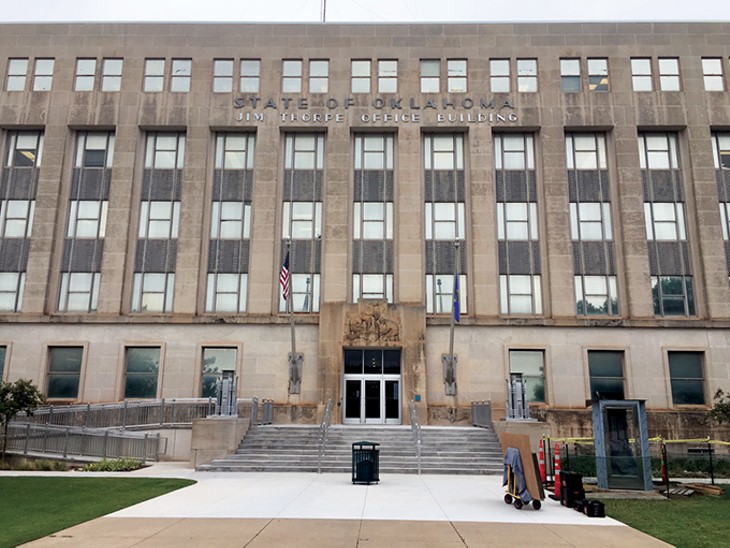 There’s a common adage that where there’s smoke there’s fire. The claims of nearly three dozen current and former employees of Oklahoma Corporation Commission lie within a more than 50-page report and range from harassment and physical intimidation to bigotry and a toxic work environment, all of which suggest that a fire has been burning at the commission for years.

The report sheds light on Briley’s personality and workplace demeanor, stating that employees went to great lengths to avoid him. Nearly every employee interviewed shared a story of fear or discomfort.

Briley worked at the commission for 12 years, from 2006 until 2018. He died in August of this year. Weeks before his death, he could not be reached for comment.

“He made me feel uncomfortable,” a current employee who wished to remain anonymous said of Briley in a phone interview with Oklahoma Gazette. “He would look me up and down and undress me with his eyes. He had no regard for my personal space and would come too close.”

The inappropriate behavior was so obvious that other employees began to take notice and made plans to watch out for one another.

“Not being alone with Briley has become somewhat of an issue with the women in the office, and they sort of protect one another by being in the area when Mr. Briley is around,” the Fidelis Group report stated.

The report describes Briley as a man who had no tolerance for women in management or for male employees he suspected were homosexual. According to the report, Briley’s office behavior was unpredictable and unstable. He yelled, cursed, made sexually suggestive and homophobic remarks, invaded employees’ personal boundaries and threatened them with their jobs.

In his interview with Fidelis Group, Briley denied all allegations and wrongdoing and claimed that the employees who made accusations against him were doing so to damage the commissioner’s reputation, a belief shared by Anthony.

“He believes some of the issues that have been raised by OCC employees relative to him are political in nature. He feels that he is being used by certain political enemies of Commissioner Anthony for their own personal advantage,” a representative of Fidelis Group stated when summarizing his interview with Briley during the internal investigation.

A Fidelis Group representative stated the following in the report regarding similar sentiments that Anthony held: “He believes the allegations … to be politically motivated for the purpose of attacking him through Briley.”

Former OCC employee Sandra Fendrych said it’s what’s not stated in the report that matters most.

“You have to ask yourself, Why weren’t the claims of the commissioner’s employees reason enough for him to terminate Briley? Why insist on paying an outside party thousands of taxpayer dollars to determine whether or not we were telling the truth? That right there tells you that Bob Anthony didn’t value his employees as much as he valued himself,” Fendrych said. “When you disregard the concerns your staff has about their safety and their wellbeing, it says a lot about you.”

A former high-level employee of the commissioner who requested to remain anonymous said she believes Briley was socially awkward but not a sexual harasser. Instead, she said, Briley appeared aggressive because Commissioner Anthony used him to gather information for the commissioner that would otherwise be restricted from him.

“If he needed information from a female employee, he would block her way out of her office. To someone who doesn’t know better, that may appear to be sexual harassment. But from an upper-level management perspective, I know that was Joe’s way of getting information from that person whether they wanted to share or not,” she said.

The employee said Briley was not pleasant to work with and would have been fired had he worked anywhere else.

“He was moved at least four times to different departments because he couldn’t get along with anyone,” she said. “To this day, I think Joe has dirt on the commissioner. Why else would the commissioner keep him there?”

The report was published in 2011 and while prior claims of harassment made against Briley are mentioned within it, the employee interviews collected during the investigation were not substantial enough for Fidelis Group to condemn Briley for sexual harassment in 2011.

During Anthony’s interview with Fidelis Group, the commissioner said he doesn’t believe Briley violated the law but that he might have benefitted from sensitivity training.

Anthony allowed Briley to continue working for him for an additional seven years after Fidelis Group released its report. In March of this year, one month before Anthony filed for re-election, Briley retired from the commission.

Anthony will run for re-election against democratic candidate Ashley Nicole McCray on Nov. 6. Anthony is the longest-serving utility commissioner in the country, having held the position for 30 years. Due to term restrictions, he can serve only one more six-year term.

“I still get a little sick when I think of my time there,” the former employee said. “The commissioner caused a lot of hurt in a lot of people.”

When asked how a commissioner whose tenure was marked with such interoffice strife could maintain his position for three decades, the employee pointed to Anthony’s family’s success, money and name.

“He is C.R. Anthony, after all,” she said, referring to the department store chain that Anthony’s grandfather launched in Cushing in the 1920s. “Status can get you pretty far in politics.”

Intimidation, she said, is an effective way of maintaining that status.

“This is how intimidation worked at the commission,” she said. “All Bob Anthony had to do was intimidate you once. After he intimidated you once, he didn’t have to do it again because after that first time, you weren’t afraid of him anymore, you were just afraid of being intimidated again … by anyone. If you’re really good at intimidating others, you don’t even have to do it yourself. You can get someone else to do it for you.”

Fendrych said Briley and Anthony used scare tactics against her.

“[Anthony] would go around telling us that if we talked to the media we would be fired,” she said.

When Fendrych was diagnosed with bladder cancer, her supervisor allowed her to work from home. It was a decision, she said, that Briley loathed.

“He’d call me and ask when I was coming back to work. The day I was diagnosed, he asked me to come back to the office from my doctor’s appointment so that I could attend a staff meeting,” she said. “I always felt like my job was on the line.”

Current employees at the commission cited a fear of losing their jobs as reason for their quotes to not be attributed with Oklahoma Gazette.

Other than offering Gazette his office’s zero tolerance police regarding sexual harassment, Anthony declined to comment.