Nebu encourages healthy eating for Devon employees and all of downtown OKC.

For a first-time visitor inside Devon Energy Center, I was certainly impressed with the gleaming mezzanine that reminded me of Star Fleet Academy from the most recent Star Trek film franchise.

Plenty of natural light led me down the corridor to my destination as I pondered whether it was acceptable to wear sunglasses inside. Opened in 2012 at the completion of Oklahoma’s tallest building, Nebu, the main cafeteria for the building’s more than 2,000 employees, is open to the general public.

Taking its name from Devon Energy’s first large drilling project, Northeast Blanco Unit, Nebu is one of the best sources of nutrient-rich and healthy food options in downtown Oklahoma City.

Under the direction of executive chef Melodie Thornton, who is finishing her first year in charge of Nebu’s rotating menus, catering and designing corporate diet plans, Nebu has nine stations where 19 cooks prepare and serve food right in front of customers.

Thornton got started at Redrock Canyon Grill and continued with Hal Smith Restaurants group to open a pair of high-end celebrity sports bars: Kd’s Southern Cuisine and Wes Welker’s Sports Bar & Grill. Thornton also founded Paseo Grill, which she remained part of until only recently, no longer wanting to split her time between two operations.

Devon contracts California-based Guckenheimer Corporate Food Service, which employs Thornton, to prepare all-natural and healthy meals that fall within its dietary guidelines. It doesn’t mean everything offered at Nebu is healthy, but each station serves a “well” item, meaning that it is at or less than 800 milligrams of sodium, 500 calories and five or more grams of fiber.

“They have proven — I don’t know what the statistics are, but I’d love to see them someday — that by encouraging health and wellness of the employees that they have reduced insurance premiums by millions and have more work productivity, less missed days because of illness,” Thornton said. 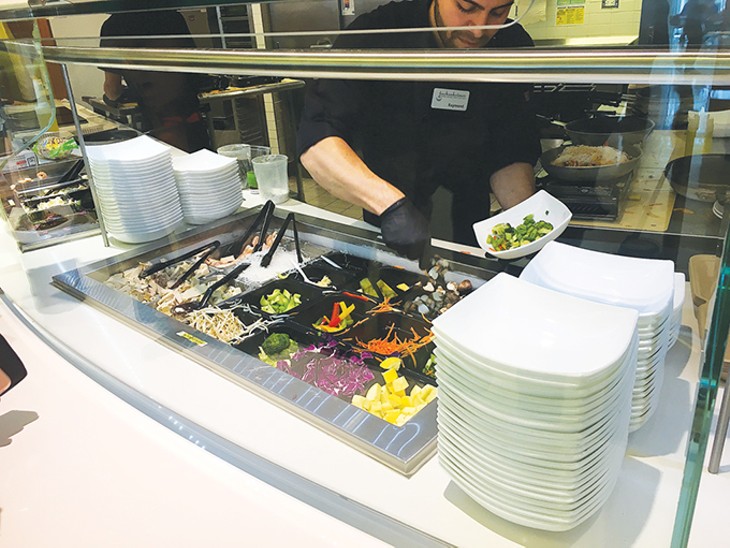 The most popular station is designated Well Bistro — which offered Asian glazed pork loin on my visit — because everything qualifies for a discount, Thornton said.

About 25 percent of Nebu’s customers do not work at Devon, Thornton said, and Nebu is actively trying to cater certain parts of its menu to guests that are not driven by “well” discounts.

At the center of Nebu is a two-sided health bar that hangs under a modern $250,000 chandelier.

“It’s called a health bar; we don’t call it a salad bar,” Thornton said. “With as much attention as we gave to the chandelier, we try to make sure that the food meets that expectation.”

Although it is a health bar, it does not qualify for the “well” discount because Nebu cannot control how much a person adds to their plate, but it charges 60 cents per ounce for a bevy of fresh and hand-cut vegetables and composed pasta salads.

At the western end of Nebu stands the sushi station, where Khai, a 20-year sushi veteran, prepares bright and delightfully tempting rolls.

“They will all be gone within an hour,” Thornton said while gesturing to the prepared sushi rolls, noting that they’re made with brown rice to qualify for the “well” discount. “We offered [white rice] as an option, but it’s gotten to where it is so predominately brown rice that we got rid of white altogether.”

Thornton said the second most popular station at Nebu is the Asian bowl station, where two lines quickly serve custom orders of vegetables, protein (shrimp, tofu or chicken) tossed in a sauce with either rice or rice noodles that have less carbs than eggs noodles, Thornton said.

This became my go-to station during my first trip to Nebu, and I found it a perfect representation of what they have to offer. I ordered a bowl ($10) with chicken, purple cabbage, bamboo shoots, sweet peppers, bean sprouts, broccoli, mushrooms, carrots and yellow squash. The bowl was overflowing with vegetables before rice noodles were added.

It took about five to 10 minutes to go through the line, but I found it orderly and convenient. I got the noodle bowl covered in a spicy sauce, and it packed plenty of punch. Although I’m not the world’s biggest fan of chicken breast, I experienced some cognitive dissonance biting into the bird because I did not expect pre-chopped cafeteria chicken to be so flavorful. The quality of the ingredients shines, as Thornton noted that they don’t overcook the vegetables so they retain as much nutrition as possible.

I found the bowl both spicy and refreshing. It was more than enough for two meals, and Nebu provided an environmentally friendly takeaway container. The next time I’m in downtown around lunch, I will absolutely consider getting a fresh meal from Nebu rather than something processed and fried elsewhere.

What works: The Asian noodle bowl delivers heat and nutrients.

What needs work: There’s no white rice for sushi.

Tip: Get there before noon to avoid the lunch rush.