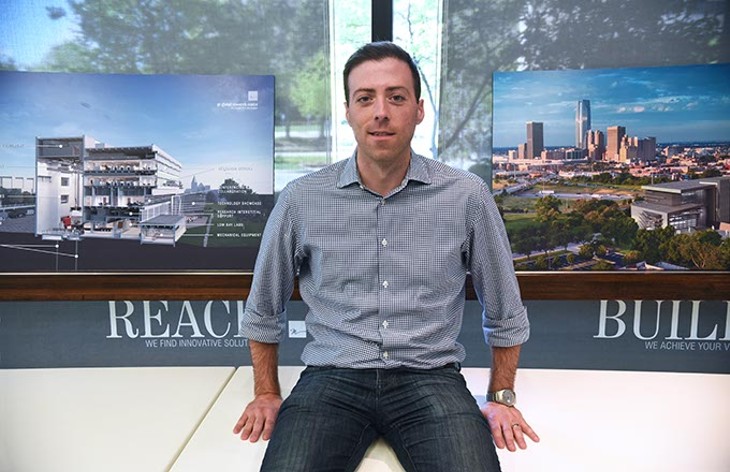 A native of New York City and former resident of Chicago, Baitz brings a unique perspective to Oklahoma City’s downtown design process, which the DDRC plays a part in shaping.

Baitz recently sat down with Oklahoma Gazette to discuss the state of design and development downtown.

Oklahoma Gazette (OG): How would you characterize downtown right now from a design and building perspective?

Cory Baitz (CB): I think it’s at a really good point. The Devon Energy Tower has done so much for the city. I don’t know if everybody realizes it. The way it was designed, the quality of the design and architecture, it has really elevated the design standards in the city and raised the bar for what is built moving forward.

I think that influence is going to permeate for years to come because I think that bar is being raised. There is a lot of availability downtown to do new and good design, and as that development comes in, with that bar already raised, it’s going to further develop in a positive way.

OG: What advantages does downtown Oklahoma City have from a design and development perspective?

CB: Considering cities like New York and Chicago and their history and density and the existing infrastructure, it’s really tough to maneuver through and change there. You have some infill projects here and there, but [those cities] are only adding a stitch or two to the fabric without any major changes taking place to the culture of design.

I think in Oklahoma City, right now, there’s a lot more room to influence that fabric, to put in whole swatches. There’s a pretty strong and stark history with demolition here that has been tough, but at the same time, that history is providing an opportunity right now. Those buildings are gone and they are lost, but right now, they are parking lots, and those are blank canvases for future infill projects.

From a [transportation] infrastructure standpoint, there is not much here other than driving your car. But is that maybe an opportunity for something else to come in? When people start talking about the future of personal rapid transit and the [self-driving] cars, Oklahoma City has the space and it doesn’t have any other modes of alternate transit standing in the way of implementing something more progressive.

To put a personal rapid transit system in a city like Chicago would be a huge undertaking and maybe not even feasible because of the other systems that already exist and would be in the way. But maybe Oklahoma City is more ripe, more able to take on something bigger and better because we are not as developed and we have the room.

OG: You recused yourself from a review of the 499 Sheridan project because of your business relationships, but what was your view of this project that seeks to demolish several downtown buildings and construct a high-rise office tower?

I think the way the block was planned could have opened itself up better to urban activity at the sidewalk level. The two parking garages [in that project] really landlocked the majority of that block, and there is plenty of precedence in other places of retail at the bottom of a parking tower. It is more expensive to go that way, but at some point, that investment needs to be made downtown.

OG: Is traffic an issue in downtown?

CB: The word traffic is a relative term. For me, I would say there is no traffic here. But if you are driving around downtown and you can’t get above 20 miles per hour, I actually think that’s a good thing. That makes it safe for pedestrians and cyclists, and it’s also good for local business.

I do see our concepts of transportation through downtown changing as we grow.

OG: Should the future streetcar system be considered in developer plans?

CB: It needs be part of the developer’s long-term plans. Whether it’s a streetcar, more cycling infrastructure or some other form of alternative transportation, the development that is occurring right now needs to account for it. You probably won’t see a huge impact from the streetcar [on development] until there are expansions, like going up Classen Boulevard.

When it becomes a method for getting large numbers of workers downtown, it will begin to have a real impact. But I do believe its time to start preparing for that.