Science Museum Oklahoma hypothesizes that you are not, in fact, too old or too jaded to be amazed at the wonders of the natural world. 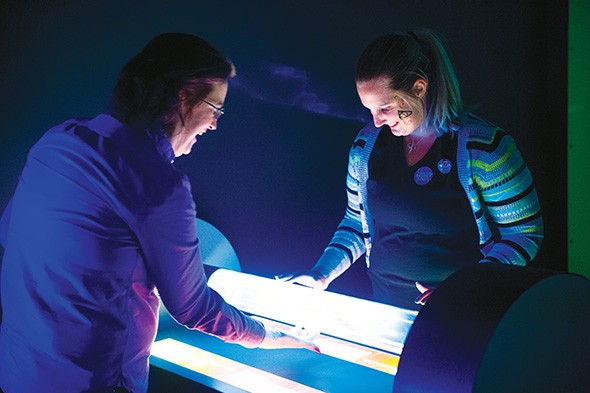 Stone retains a beautiful and resilient wonderment about the world, making his employ as vice president of programs at Science Museum Oklahoma, 2020 Remington Place, a real peanut-butter-meets-chocolate win for the city. Stone wants to inspire more curiosity and glee among his peers through SMO 21: Cosmic Con, an adults-only night at the museum to give the older set a turn at hands-on experiments that illuminate the more bizarre and delightful aspects of our natural world.

“We play with kids all the time; you’ll see kids and families exploring the museum every day that we’re open, but if you’re an adult and here on your own, you might feel a little bit awkward,” Stone said. “If you are an introvert like me but still want to come out to the museum and don’t have that wingman, this is a great time to come out with other folks like you.”

SMO 21 is put on every other month, excluding December. All patrons must be at least 21 years old, hence the name. These are the only times when one can imbibe while exploring the museum. Alcohol plus science plus explosions — just think about that.

In addition to being a resident curiosity enthusiast, Stone is also an avid comics fan. Each SMO 21 has a theme with experiments and demonstrations designed around that theme. Cosmic Con is focused on superheroes and science fiction.

“We’ll have light saber duels no different than you would with your nephew or daughter,” Stone said. “But it’ll be with other adults so you can loosen up a bit. Maybe not swing at full strength, but hold back a little bit less.”

There will be experiments harnessing the power of magnetism and electricity, just like the superpowers of Magneto and Storm, albeit on a somewhat smaller scale. Patrons will also be able to explore the strange abilities of spiders that are the inspiration for a handful of web-slinging superheroes. There will be liquid nitrogen on hand for some Iceman/Captain Cold demonstrations as well as singing saws to show the fundamentals of Black Canary’s sonic powers.

Matthew Price sits on a panel featuring comics enthusiasts talking about the link between fantastical storytelling and their scientific roots. Price is the co-owner of Speeding Bullet Comics in Norman and co-wrote The Posthuman Project, a movie about superpowered teenagers. Price researched evolution and how environmental factors can lead to significant changes in human physiology to ground some of the story logic in reality.

“The genetic changes that result in the X-Men seem fantastical, and while I wouldn’t say they are now possible, scientists are getting more advanced every day at perhaps being able to make changes at the genetic level,” Price wrote in an email. “It also has been reported that a genetic mutation is likely what made humans into such good long-distance runners compared to other species. When you compare humans’ ability there to other species, it does seem like a kind of superpower.”

Jeff Provine is the publisher of Okie Comics Magazine, a free metro publication that features short comics written and illustrated by Oklahomans. Provine will also be on the panel, as he likes to, whenever possible, infuse science into his own storytelling, whether cryptozoology or near-future technology. He believes comics have helped guide the imaginations of scientists currently transforming the world.

“I’d like to chat about the inspiration for actual inventions that come from comics, like Dick Tracy’s famous 2-Way Wrist Radio that was cutting-edge in 1946 but would be common fare in our modern days of cell phones,” Provine said. “Another is the Iron Man suit, which has inspired a whole range of military-grade exoskeletons that are awesome for construction. The military also set about creating a grappling gun like Batman’s, although it has so far proven to be much too bulky to fit on a utility belt.”

Science fiction franchises will also get their due, including a Star Trek-themed experience that lit Stone’s eyes up as he talked about it.

"If you are an introvert like me but still want to come out to the museum and don’t have that wingman, this is a great time to come out with other folks like you."—Clint Stone tweet this

“In Star Trek, regardless of which version it is, one of the coolest parts of the show was when they set phasers to stun,” Stone said. “I kinda want to do that. So we are building a very special setting-phasers-to-stun experience, and I assure you that you will really feel it and you will really remember it. It’s going to be tremendously fun.”

Those who’ve grown up in Oklahoma might remember SMO’s previous iteration as The Omniplex but might not realize that the building has undergone an astonishing renaissance in the past two decades. Gone are the dusty exhibits with outdated technology and a high fail rate. Since rebranding as SMO, the venue has flourished with continued renovations and investment into new exhibits and programming to ensure the museum’s relevance to the state. The planetarium was recently upgraded and showing Tales of A Time Traveler hosted by David Tennant during SMO 21.

Stone said that working at SMO helps stoke his own curiosity and creative energy, which he then pours into his side gig as an artist. He walks the museum intermittently throughout the day just for inspiration and to capture the spirit of one of his two favorite superheroes.

“Sometimes I think I’d like to be The Thing and to have a very clear idea of what’s right, what’s wrong and when it’s clobbering time,” Stone said. “But I think I’d rather be Beast because I’d love to find solutions to things that seem right beyond our reach, to be brave enough and persistent enough to never stop, to keep going through all these failures.

“When I was a child, I developed my superhero persona, and I wanted to keep things simple. It was only the ability to fall great distances without getting hurt. After reading some comics like The Great Lake Avengers and working at the science museum, I realize I could’ve set my sights a little bit higher.”