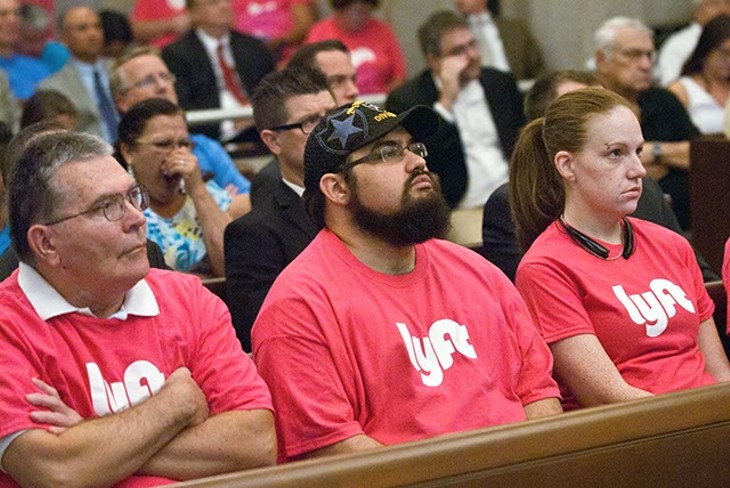 Before the city council Tuesday was an argument over regulation and the free market as Oklahoma City joined the long list of American cities dealing with the growth of rideshare services like Uber and Lyft.

The council spent two hours hearing from taxicab, Uber and Lyft drivers, as well as attorneys and insurance officials. An ordinance has been proposed that would require some regulations for rideshare services, but not at the same level as traditional cabs. The council is expected to vote on the ordinance next month.

“This is a great service that these guys have,” Pam Thompson of Yellow Cab said about mobile apps used by Uber and Lyft. “And we had it first.”

Thompson and several other representatives of local taxicab services said they also operate on mobile applications and that Uber and Lyft should have to follow the same regulations as taxis, or no regulations should be imposed on any service.

Dozens of Uber and Lyft drivers, many wearing synchronized t-shirts, were present for the meeting and told the council regulations would only prevent further innovation and stifle a service that is helping to reduce drunk driving and provides flexible employment.

The proposed ordinance before the council would require rideshare drivers to get a background check, permit and physical before being allowed to drive. Rideshare drivers would also be required to have a certain level of insurance, although not at the same level as traditional cabs.

Some said the city should do nothing.

“The most humble thing to do is to do nothing and see how this thing plays out,” said Trent England with the Oklahoma Council of Public Affairs.

Ward 1 Councilman James Greiner said he was against increased regulation but felt doing nothing was not an option because Uber and Lyft currently operate in the city without regulations.

“The assumption that we shouldn’t do anything is faulty because right now we have an industry that is operating unregulated,” Greiner said. “At the very least what we should do is get rid of all the regulations on the taxicabs.”

Some on the council shared their thoughts and there appeared to be a split between approving the proposed ordinance and letting things stand as they are. The ordinance will be back before the city council on Sept. 9.