Sam Riggs talks about moderation and balance when describing his attempt to manage the way his career has taken off in the past two years. The country artist, who makes his home in Austin, went from being a relative unknown to seeing his name and picture in Rolling Stone, his song on ABC’s Nashville and his videos all over CMT.

“It was surreal,” he said, talking about the Rolling Stone piece. “I read the article and I saw the social media response that followed it, and it felt like a movie. At the same time, I was just overwhelmingly grateful to my fans for making this possible.”

Riggs was born in Florida. He grew up in a musical family in St. Cloud, a small town in the south central part of the panhandle. His mother and father played guitar, his grandfather played guitar and banjo and Riggs himself learned to play guitar and drums and started writing songs when he was in high school.

“Garth Brooks was a huge influence on me, both writing and performing,” he said. “He played every show like it was his last. The only separation between him and the fans was the height of the stage.” 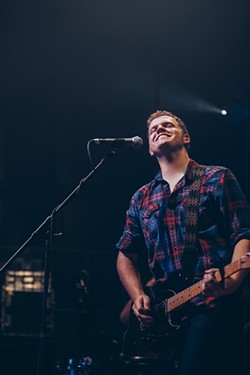 “Genres pigeonhole artists,” he said. “One of the things I liked about Austin was that for me, it was an incubator that helped me find my own voice and my own style. The city doesn’t try to force conformity on artists.”

The move to Austin happened when Riggs was 19 years old. He became a welder after high school, but that career decision did not hold him.

“I wanted something bigger for my life,” he said. “I sold everything and moved to Austin.”

Riggs’ mother had relocated to Bastrop, Texas, and his cousin was set to start at Texas A&M, so Riggs felt that the family’s nearness would help with the transition. Meeting his future wife Natalie while she was a student at Texas Christian University solidified his decision to make Texas home.

“I think moving at 19 ended up being a great decision,” Riggs said. “I was young enough to make some mistakes and recover from them.”

The mistakes he is making these days are hard to locate. The balance and moderation he talks about are a result of dealing with the sudden fame, not a reference to managing an out-of-control life. He seems genuinely mystified that things have happened so fast.

His band, Sam Riggs and The Night People, has sold more than ten thousand copies of their 2013 release Outrun the Sun, a remarkable number for an independent country band’s first album. The touring schedule has been consistent with those numbers, and his ability to straddle the country-rock and Red Dirt-Top 40 divides gives him a very broad base of fans eager to hear more.