With a fistful of Emmys and a devoted husband/pop cultural icon/co-author, metro native Megan Mullally presents The Greatest Love Story Ever Told.

Megan Mullally and Nick Offerman adore each other. They’re two comedy titans locked in an enduring love of social media legend. Like Barack and Michelle Obama, they serve as both couple goal material and paternal figures engrained in the modern American moment. Mullally and Offerman’s new book, The Greatest Love Story Ever Told, is a sort of marriage victory lap celebrating 18 years of a thriving romance, offering a fly-on-the-wall perspective of the busy couple stealing moments in between press junkets to discuss a range of subjects such as jigsaw puzzles, backstage romances and a piggy-back sprint through Los Angeles traffic to reach the Emmy Awards in the nick of time.

The tone is unusual for a celebrity book. Neither a dishy memoir or a how-to, The Greatest Love Story Ever Told is a series of transcribed conversations originally intended to lay down the foundation of the book to be fleshed out later.

“We picked a topic and just started talking,” Mullally said in an interview with Oklahoma Gazette. “We sent the recording to our editor so she could say she liked this part and this part, then we could build on that. Instead, she said she liked it the way it was, that this could be the book. It’s fun and interesting; no one ever does it this way. We always recorded while we were laying in a bed in a hotel somewhere. I’d ask if he wanted to do a chapter, and he’d say yes. We’d pick a topic and record it on his phone.”

Though there were subjects they wanted to hit, they didn’t really plan out what they were going to say. The only editing Mullally said was done was just to trim off tangents to “keep the book from being 90,000 pages long.”

Mullally was emphatic that they didn’t try to adhere to any preconceived public image and if their relationship seems like an impossibly halcyon existence, it’s because it actually is. Large swaths of the book feature their shared adoration and mild bafflement that they were so fortunate that their paths collided in 2000 during a production of The Berlin Circle in a former bra factory. Mullally’s stardom was on its ascent, and Nick was still grinding out the early stages of his career. Rather than a firestorm romance, theirs was more of a cautious slow burn.

“I held Nick at bay for an unreasonably long period of time for a variety of reasons,” Mullally wrote in the book, “the primary reason being that I had rushed into a lot of relationships in the past, and I didn’t want to do that again. So I kind of went overboard — overcompensated — with Nick.”

Even after Offer-man semi-moved in with Mullally, he was relegated to the couch, which he didn’t mind.

“I had been looking for the woman of my dreams, with whom I could trust my devotion, and I found you,” Offerman wrote. “I would have fucking still slept on that couch for years because great — if you’ll let me adore you, I’ll be here.”

For readers with a deep fascination with Mullally and Offer-man as an item or with matrimony as an ideal, this book will be a satisfying view into love when it works as advertised.

There is also some emotional heavy lifting, specifically when the conversations turn to family. In a chapter titled You’re Just Trying to Get In On the Action Because Your Family Is Like A Norman Rockwell Painting, Mullally reveals her battle scars from a difficult upbringing in Oklahoma City with her emotionally abusive father. She remembered him as a frustrated actor far removed from Broadway and Hollywood, driving around town in a 1937 Rolls-Royce Phantom III while wearing an ascot, a man out of place and time. Nick, in response, had only a story of receiving a swatting that led to both him and his mother laughing. Life in Minooka, Illinois, was much more stable for Nick than life in Oklahoma City was for Mullally, but she counts herself fortunate to have had a mother who believed in Mullally’s talent and did her best to make up for the father’s failings. 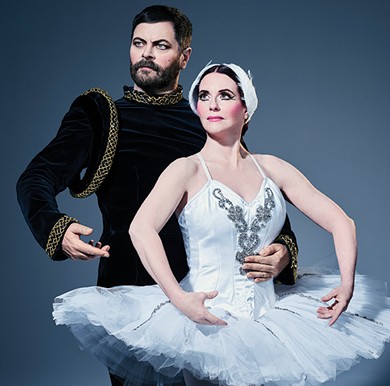 These stretches are where the book feels most raw and unguarded, its most uncharted. Even Mullally’s closest friends didn’t know these darker parts of her childhood.

Mullally and Offerman also delve into the mechanics of keeping a power coupling intact, which include long, steamy sessions of jigsaw puzzles and audiobooks, but also a stringent rule that they will be apart no more than two weeks at a time, no matter their schedules or where on planet Earth they might find themselves. Even if it’s just a quick flyover to London for one quiet day together, they hold fast to the rule. The rule might not, on its surface, seem applicable to an average couple not burdened by work-related globetrotting, but it does speak to the universal need for prioritizing the ones you love.

Because the book was largely comprised extemporaneously, it lacks the comedic efficiency of Parks and Recreation or Will & Grace, instead opting for more casual exploration as Mullally and Offerman riff off each other. At a few points in the book, they do hold back, most notably during a brief mention of a toxic Hollywood player who remained nameless and their brief discussion of their moments of discord.

“There’s a perception of us as this perfect couple, so we’ve always been paranoid that if we get into a scrape at the grocery store, it’s going to be running on a chyron on CNN,” Mullally wrote. “That’s ridiculous, of course, but I’m exaggerating to make a point, the point being that people think that we have such an idyllic relationship that if we had a normal spat, like people do in public places…”

“It would be the Death of Love,” Nick interjected.

The Greatest Love Story Ever Told correctly is not meant to be confessional or instructive; it instead offers the reader the opportunity to play witness to their love. Offerman perhaps gives the best advice of the book when he discusses his patience and honesty when he was not ready to commit with other women. He wanted to wait until he found someone he could venerate. Even if the marriage isn’t a high-flying celebrity whirlwind, they do believe that each person is worthy of adoration and if we, their readers, want a romance of their magnitude, we must wait until we find someone worthy of an Offerman/Mullally level of exaltation.