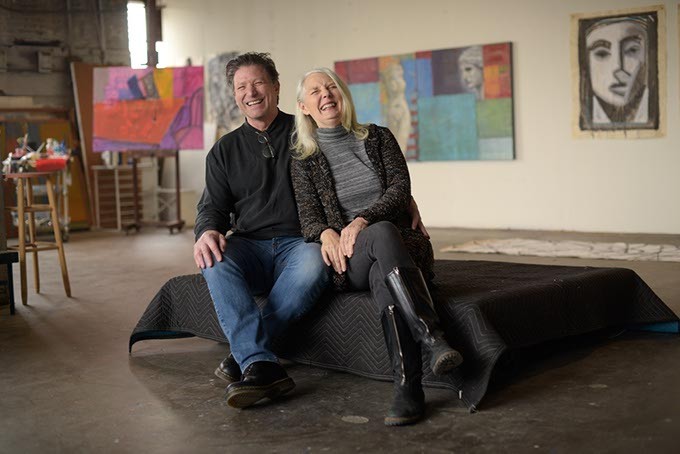 Banana nut muffins rest in a nest of tin foil atop the mobile kerosene heater. Each person takes one and huddles close around the only source of warmth in the spacious former warehouse turned art studio. A new, buildingwide heating unit to be installed the next day would have kept them all toasty, but this day’s winter chill forces proximity and kinship.

Since the late ’90s, Tony Dyke and Susan Morrison-Dyke, a power couple of Oklahoma City’s art scene, have used the space along the train tracks in downtown’s Classen North Highland Park area to create and plot their individual works and large-scale murals on prominent display in OKC and as far away as Florida and Massachusetts.

On the days they’re working together on a large public piece like Chickasaw Bricktown Ballpark’s History of Bricktown mural, the couple’s most well-known local work, the flat might be flooded with bits of tile and other materials. On this day, the second-floor studio space is mostly barren, housing only older works from their archives.

That is not to say the pair has been idle in recent years. Tony and Susan’s latest works are all on display at Art Hall, a relatively new, public-use corridor and gallery neighboring The Drake Seafood and Oysterette inside The Rise retail building, 519 NW 23rd St. Their co-exhibitions (Tony’s Views from the Studio and Susan’s Elusive Movements) close Friday, though they have both been up for the last several months.

When the two met more than 25 years ago, their styles were very different. Tony was a more impressionistic, figurative painter. Susan’s art was more iconic and she was fascinated with work from the ancient world. Through the years, Susan said in a recent Oklahoma Gazette interview, the two have seen some stylistic convergence.

“We both vacillate back and forth, but it’s through time,” she said. “It’s not like one day we’re doing this and the next day we’re doing something else. We’ll start working on something and bring in some figurative elements into something abstract, just kind of building into it.”

Tony is a New Englander born in Hanover, New Hampshire. After earning his master’s degree in arts from Massachusetts’ historic Tufts University in 1988, he moved to Vermont Studio Center, a nonprofit organization that harbors artists and writers from around the globe as they study, create and complete residencies.

Tony recalls moving into an old mill, where part of his daily duties included completing various errands for the workers around him.

“I was like the artist-in-residence,” he said, “but I actually just helped around the place and made sure everybody had what they needed.”

He painted throughout his stay and had a show in the Johnson, Vermont, art hub each year.

One winter evening, Tony helped welcome a new batch of resident artists. There was three feet of snow already and a near-blizzard dumping more on them by the minute. All the new arrivals had checked in except for one, an Oklahoma-born artist. Tony waited until her headlights at last became visible in the flurry.

“She pulls up in a little Subaru,” he remembered. “I open the door, and that’s when I first met [Susan]. It was love at first sight, really.”

Tony and Susan married within a year of meeting. The couple relocated to Oklahoma City in 1996 so Tony could go to work as an artist and photographer for a local graphic design company owned by Susan’s brothers.

He worked in design corporately and as a freelancer before moving on to teaching.

“I got tired of always trying to please a client and interpreting what salespeople wanted,” he said.

Susan also spent several years working with students as an artist-in-residence for Oklahoma Arts Council, which allowed her to visit several state schools and lead painting and collage workshops.

While holding other jobs, neither lost focus on their own art. Through the last several decades, they have spent many hours in their shared downtown studio.

“We were always artists first,” Susan said. “Then we had the jobs to try and support the other stuff.”

The couple recently unveiled its latest mural commission at the Shoppes at Northpark, 12100 N. May Ave. Susan, often with assistance from Tony, has many other notable commissions throughout OKC, including works for Special Care Inc. and St. Anthony Hospital, the ballpark mural and a painting procured as a gift to Aubrey McClendon.

While gathered around the heater’s gas flame, it could be easy to forget the sweltering summers during which the couple worked to piece together the ballpark mural.

The two spent nearly two years creating the 160,000-tile collage. They did the work themselves with the help of just two part-time assistants. Susan remembers sweating in the hot studio, and they sometimes almost stripped down to their bathing suits.

Still, the space has proved invaluable through the years. Susan’s father’s company purchased the building in the 1970s. The business later moved into a larger facility, but the warehouse has served as the couple’s studio since 1998.

With their past experiences as young artists in mind, Susan and Tony now hope to share the space with other city artists while making improvements along the way.

They want to remove some walls and open up the 10,000-square-foot upper floor to construct individual, for-rent artist units.

“It’s got light and views of the Capitol,” Tony said. “It’s just closing it off and getting an [air-conditioning] unit in each one.”

The conversion will take the Dykes a year or two. However, when it’s complete, they will be happy to give new residents a home in the place that has functioned as their own art dwelling for so many years.

Views from the Studio and Elusive Movements

Art Hall at The Rise