The Collective Kitchens + Cocktails is taking applications for its food hall concept through June 22. 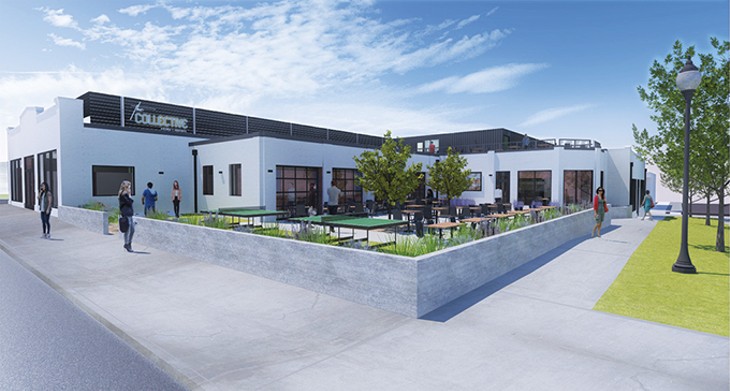 The Collective Kitchens + Cocktails aims to be the city’s first food hall, which will operate like an incubator for up-and-coming chefs and entrepreneurs at its Midtown location once it opens in early 2019.

The Collective is currently taking applications until June 22 to be one of the seven kitchens inside the two-story, 12,600 square-foot facility located at the Conley Building at 308 NW 10th St.

The concept began as an idea with restaurateur Truong Le (Okie Pokie, Noodee, Chick N Beer, Covell Park), who is working with Northline Development, operator Jenny Nguyen and a few other private investors.

Le said that when the project was announced, he immediately began to hear the same question: “What’s the catch?”

“We’re in the position to give folks an opportunity for their own brick-and-mortar with very minimal risk,” Le said. “There is no catch. This is us knowing that there are talented people out there that don’t have the opportunity yet to present their concept and their ability to be an entrepreneur.”

The Collective does not require money down to set up in the kitchen and will provide an allowance to create signage while also performing equipment maintenance. The Collective will collect a percentage of gross sales each month and will operate a coffee shop and two craft cocktail bars to boost income.

Le said the incubator model is welcome for those entering the restaurant industry. He said that converting a building to open a restaurant costs an average of $250,000, which means taking out a loan or bringing on partners. The Collective offers a turnkey solution.

Kitchen operators are only responsible for bringing pots, pans, knives and other kitchen utensils.

“[At a traditional restaurant model], it could take two years to make a profit, and that’s if you’re lucky,” Le said. “It’s one of the hardest industries to survive in. With us, in one month, you’re collecting.”

Le said that they’ve been overwhelmed with applications, which will continue through late June. To apply, visit thecollectiveokc.com and fill out the form under the “auditions” tab. The preliminary application only requires a name, email address, personal background (experience in the restaurant industry or as a home cook) and a brief description of the proposed food concept.

"I want to see people in the industry do their own thing." — Truong Le tweet this

“We want some personality in the application,” Le said. “After June 22, our team will sit down and, based on the description, we will reach out and they will require a more detailed application with a business plan.”

The Collective team will whittle applicants down to 30 finalists who will compete in an audition process beginning July 19 for a panel of judges that will ask finalists to prepare a mock lunch or dinner service where they will be asked to prepare multiple orders within a relatively short amount of time. The auditions will be held over a three-day period in a facility with a full kitchen.

Le said that they have received applications from home cooks and those with restaurant experience, but applicants currently working at a restaurant who want to keep their involvement discreet through the audition process and before opening next year should make note of that on their application.

“Even within my own business, I’m not going to hold it against you to want to grow,” Le said. “I even told my staff, ‘If you have an idea and a knack and want to do your own business, you need to apply.’ I want to see people in the industry do their own thing.”

Le said that The Collective will not ask its kitchens to compete against each other with similar concepts and they want a wide variety of ethnic cuisine and meals available throughout the day.

Once the concepts are finalized, they will begin to announce each kitchen one by one with produced video interviews modeled after reality television in order to build anticipation for the food hall leading up to its opening in early 2019.

Le said that owners will not be tied down to long-term contracts. Ultimately, they are encouraged to save enough money to move to their own brick-and-mortar location. He said that once someone gives notice to move out, they will open the process up to new applicants but some of the 30 finalists could be contacted.

“This industry changes so quickly and there are so many ideas that are constantly coming out; we don’t want to be in a position where we’re stagnant,” Le said. “Don’t get me wrong; if they want to stay, that’s perfectly fine as well. When people have the ability to grow, they probably will, and we want that.”

Le has used his own concepts of Okie Pokie and Noodee, which began operation as separate restaurants inside his former Guernsey Park restaurant in March, as a dry run for the point-of-sale system that will manage the multiple concepts at The Collective.

“I love the transition that we’ve made; we’ve learned a lot, and it’s gone really well,” Le said. “I think it is going to work. This is my test subject for The Collective with the two different concepts we have in here. It’s worked great.”

Le said that construction is slated to finish on the Midtown site by December and it will be operational by Spring 2019 at the latest, but they are shooting for January or February 2019.