COVER: After leaving the kitchen full-time, Beth Ann Lyon wants to shape lifestyle ‘beyond the fork’ 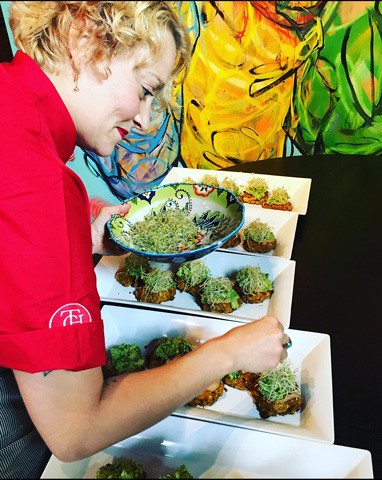 Lyon advanced in the first round of competition by recreating a chicken-fried steak recipe that she wrote for the successful debut of The Press restaurant in 16th Street Plaza District.

During the second round of the show, Lyon opted to stay true to her current path in life, one that is focused on nourishment and vitality. Lyon made plant-based cauliflower tacos that didn’t earn favor with the judges.

“A lot of my friends were like ‘Why did you cook vegan food? You could have won,’” Lyon said. “How you view abundance and how I view abundance is completely different. I spoke my truth and used that platform as a way to tell people that there is a joyful way to eat.”

It’s a stark contrast for Lyon, 38, who has been in the restaurant industry since she was 15 years old and received classic French training under Kurt Fleischfresser’s Coach House apprenticeship program.

Lyon was the first executive chef at Kitchen No. 324 and Provision Kitchen but has left the kitchen full-time for a consulting role within the last year, designing menus for Hungry Town Concepts (The Mule, Anchor Down, The Press) while establishing her own limited liability corporation in 2017.

“I was working 70 hours a week, and it was not conducive to being a mom of two very small kids,” Lyon said.  “I was literally missing them grow up for two years. I moved into a consulting role (at Provision Kitchen) and went around Oklahoma City in March of last year.”

Eschewing traditional diet constraints, Lyon doesn’t refer to herself as a vegan or vegetarian. Instead, she prefers the term “intuitive eater,” which was coined by local yoga and mindfulness instructor Tisha Tate.

“If I’m able to get a mindfully sourced piece of cheese from a happy cow, I am going to indulge in that,” Lyon said. “I’m never in a spot where I’m knocking a beautiful pastry or a piece of Kobe beef. My journey is to question where your food comes from … it’s a state of being that goes way beyond your fork.”

In addition to writing menus for restaurants, Lyon’s consulting includes the promotion of self-care and natural medicines, which can be accessed through partnerships with The Yoga Box, 1900 Northwest Expressway, Suite 114, and Chi Gallery, 2300 NW 17th St.

Lyon is selling a variety of natural medicines, including immune-system-boosting elderberry syrup, tinctures and relaxing bath salts at Yoga Box. She partnered with Native Soul creative collective and Yoga Box owners Lisa Laughlin Taylor and Hialee Howard to form Shape Your Life, which will be an online portal with yoga instruction, healthy recipes and cooking videos for a monthly subscription.

With a culinary and nutrition background, Howard prepares grab-and-go breakfast and lunch items in addition to meal prep options from Out of the Box’s kitchen.

“Beth has been awesome and really putting together some great recipes and helping shoulder the load since I’m so busy with meal prep,” Howard said.

The Shape Your Life website will go live by March 1, Howard said.

At Chi Gallery, operated by Corrie Moore, Lyon is offering a series of bi-monthly classes called Second Sunday Workshops. The first, focused on self-care, is Feb. 11.

Citing the work of modern spiritualist Eckhart Tolle, Lyon’s series of classes will start with learning to take time for yourself and helping to teach the context behind the ego’s penchant for producing negative thoughts.

“We have the answers inside of us, but they’re hidden under shame, resentment and anger,” Lyon said. “We have to pull these things out of us, and it’s called ‘the work.’ That’s the self-love.”

A Feb. 25 class will focus on plant medicines, and the March 11 class is understanding a holistic approach to treat anxiety.

“It’s a realistic bag of tools for people that don’t want to get on Prozac,” Lyon said, noting that she relies on daily baths to help center her thoughts and clear her mind.

“When you can be an observer of each thought and understand, ‘I am not that thought,’ [it’s important],” Lyon said. “The thoughts of, ‘I’m fat; I’m stupid; I’m broke,’ is coming from your ego and your ego is here to work against you.”

Lyon will provide small plates and other gifts for the classes, which are $40 each or $100 for all three. Tickets are available through her Instagram account (@chefbethlyon) or her PayPal (paypal.me/blyon454). For more information on shape your life, go to theyogaboxokc.com/shape-your-life.