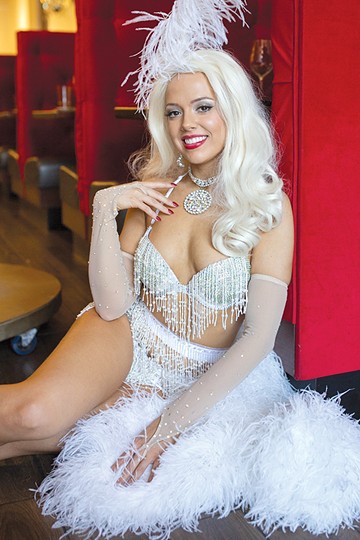 Wolf, who was born in Oklahoma and now splits her time between Oklahoma City, Paris and Berlin, produces several burlesque offerings every year. Her holiday shows (around New Year’s Eve and Valentine’s Day) are typically smaller and more intimate affairs, while Oklahoma City Burlesque Festival features more performers and an even wider range of talent over two days.

Wolf started the festival in 2013 with the aim of bringing internationally recognized burlesque and variety talent to Oklahoma. The festival has become the biggest burlesque production in the state.

“We have a lot more variety, in general,” Wolf said. “We have people coming from around the world, so you can also see different regions reflected a little bit in that. Burlesque in New York can be a little different than burlesque in Seattle, for instance, in terms of the subgenres that are now popular.”

While Wolf said classic burlesque reigns supreme, places like New York City or Seattle provide what she called “more space to get weird” and support for niche shows. She aims to bring some of this high-quality diversity of performances to the festival every year.

Headliners for 2019’s festival include San Francisco-based Frankie Fictitious and Canadian performer Lou Lou la Duchesse de Rière, who is a member of the Mohawk Nation. Both will be performing in Oklahoma City for the first time.

“As an indigenous performer myself, I have really been trying to get [de Rière] down for a while,” Wolf said. “And I’m really excited we finally made it happen.”

“It’s always exciting to see those acts,” Wolf said, “to bring Vegas to Oklahoma City, which is what we’re always trying to do anyway.”

“I think everybody’s anticipating that this is going to be the biggest festival yet.”
— Adèle Wolf tweet this

Oklahoma-based festival performers include aerialist Chase Vegas and the Aalim Najim dance troupe from Aalim Bellydance Academy. Wolf performs both Friday and Saturday with two of her signature props: a giant champagne coupe and a humanely sourced wolf pelt.

Wolf said she is excited for the changes being brought to the growing festival’s seventh year. The production is moving to the vibrant Uptown 23rd District for the first time with Tower Theatre as its venue.

“I think everybody’s anticipating that this is going to be the biggest festival yet,” Wolf said. “Certainly behind the scenes, it is. We always try to go bigger and better every year. But now we have this larger capacity [venue] as well.”

Wolf said she hopes performers will utilize the city’s new streetcar system during their visit, too.

In addition, the festival falls on the weekend of Oklahoma City Pride Parade, and LGBTQ+ pride is another important element Wolf wants to incorporate into the event. In the past, she and RedBone have coordinated rainbow outfits and hope to do the same this year.

Another option for festivalgoers is its range of workshops, which are held at Wolf’s Oklahoma School of Burlesque, 2520 N. Meridian Ave., on Saturday starting at noon.

Among this year’s offerings are a rhinestoning class with Fictitious, a freestyling class with RedBone and a floor work class with de Rière. Several other classes taught by other performers will also be available on the curriculum.

“Every class is completely different from the others,” Wolf said. “So people have a really good variety to choose from.”

Another unique element of this year’s festival is featured artist Nicole Moan, who makes ceramic corsets. Moan will collaborate with Wolf to create pieces that will be on display at the festival. 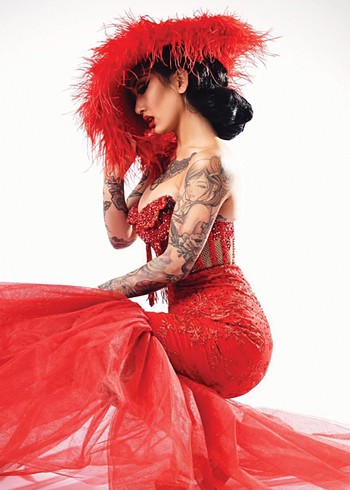 Fictitious said she is excited to be involved in Oklahoma City Burlesque Festival as both a performer and a workshop instructor. She got her start after watching a Dita Von Teese show and realizing she wanted to pursue burlesque.

She previously performed as a hula and Tahitian dancer for 15 years and had been in bands, so she was always comfortable onstage.

“But it was never the right avenue for me,” she said via phone. “And then when I found burlesque, I was like, ‘Wow! This combines everything I love.’”

She took classes with Fishnet Follies Classic Burlesque Revue in Oakland, California, around 2013 and from there began her burlesque career. Her training is classic, but she said she puts a “rock ’n’ roll twist” on her performances for a neo-burlesque style.

One of her favorite things about performing is the energy she receives from her audiences.

“You’re giving so much to the audience, and they always give you so much back,” she said. “It’s just such an amazing feeling.”

Fictitious met Wolf in San Francisco and reconnected with her at Burlesque Hall of Fame a few years ago. Fictitious said she was always impressed by Wolf’s performances and didn’t expect her to remember her but is now glad to call her a friend. She said this is just one example of how close-knit and supportive the burlesque community can be.

“I feel like that’s how it is with a lot of these performers,” Fictitious said. “I’m like, ‘Oh my gosh! I’m actually their friend now?’”

After just a few years in the field, Fictitious has made a name for herself. She was crowned Miss Viva Las Vegas in 2017 as a solo act and also performs as part of the Dem Foxie Femmes dance troupe. She also said she was thrilled to be up for Miss Exotic World.

“When I started, I made a vision board for myself,” she said. “And competing for Miss Exotic World — not even winning, just being able to compete for it, just because of the caliber of the performers that I always see performing in it — it’s always been one of my goals.”

In the rhinestoning class Fictitious will teach at the festival, participants can expect to benefit from her training as a painter as well as a performer.

“I take a lot of what I learned in art school, and I teach you the basics of color theory,” she said, “and how to put it in a costume and make your costume pop.”

Fictitious is looking forward to visiting Oklahoma City for the first time and is excited to entertain a new audience.

“The reason I love traveling is because I love meeting performers from everywhere, and I like seeing all the different styles that are brought to the stage,” Fictitious said. “I feel like I just get so much inspiration from traveling.” 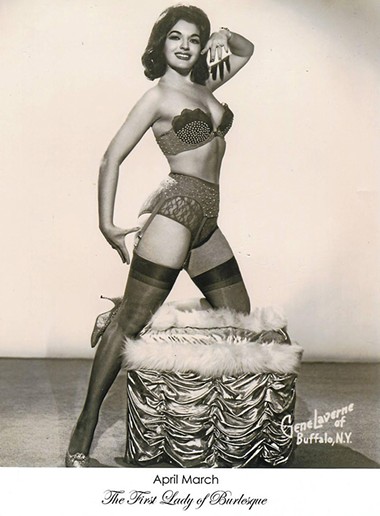 One of the festival’s guests of honor is April March, a veritable burlesque legend. March started performing in 1952 and is known widely as The First Lady of Burlesque.

March was born in Oklahoma City in 1935 as Velma Fern Worden. After a brief, unsuccessful stint as an employee at The Oklahoman (she said she quit before publisher/owner Edward K. Gaylord could fire her), she lied about her age and became a cigarette girl at now-closed Derby Club, 3133 NE 23rd St. It was there that Dallas club owner Barney Weinstein stopped to ask her when she was going on as a dancer.

“I said, ‘Oh, I could never take my clothes off like that,’” March told Oklahoma Gazette via phone.

A few months later, determined to get into show business, March told her grandparents she was going to tap dance in Texas and she joined Weinstein at Theater Lounge. She got her start in burlesque alongside another prominent dancer, Candy Barr.

She went on to star in two of producer Harold Minsky’s famous burlesque variety shows. She booked the shows without even changing into a costume.

“I’m the only person that ever auditioned for Harold Minsky that never had to audition,” March said with a laugh.

She went on to work with famous burlesque performer Ann Corio and later was featured in a 1964 issue of Sports Illustrated. She even appeared as a stripper in the 1965 Jim Henson short film Time Piece, which was nominated for an Oscar. She said no to multiple acting opportunities.

“I just turned down so much good stuff, it’s unbelievable,” she said. “I liked burlesque. It was done nightly back then, and I met a lot of nice people, and I loved to travel.”

March and Wolf met at Burlesque Hall of Fame in 2014, and now Wolf considers March a mentor and friend.

“When I met her, I was still pretty fresh,” Wolf said. “[I’d] only been in for a few years. I was actually too starstruck to even talk to her.  And I don’t really get that way so much, but she’s April March.”

They quickly found out they were both from Oklahoma City, both Native American and both animal lovers who share an astrological sign. Later, Wolf even wore one of March’s early custom-made costumes to perform a tribute number. Their measurements were identical.

“Having that experience with her, of her being so accessible to me,” Wolf said, “is really something that I will cherish for my whole life.”

When it comes to her style of performance, March favors an elegant, classic version of burlesque and calls herself a “walker.”

“I can spend five minutes taking off gloves without people getting bored,” March said.

She thinks some modern performers come out of their wardrobe too quickly.

March suggested that anyone wanting to get a start in burlesque should take classes, watch their favorite performers and practice. And she recommended that you do not throw your wardrobe around.

March remains a fixture of the burlesque scene and is a regular at Burlesque Hall of Fame events. She made a recent appearance in England and received a standing ovation at Hippodrome in London.

For her appearance at Oklahoma City Burlesque Festival, March plans to speak and is tentatively set to teach one of the workshops. In addition, she will be available to sign copies of her book, Reflections of My Life — April March: The First Lady of Burlesque.

An April March-themed cocktail will also be available at the venue bar.

As the date of the festival neared, Wolf said tickets are selling quickly, and her die-hard fans are already planning to attend.

“With all of our shows, our goal is really to take people out of their everyday experience for a little while,” Wolf said, “to make them forget everything and just have fun and enjoy themselves.”

Diversity, as Wolf mentioned, is also central to the experience.

“I want people to see themselves reflected onstage,” Wolf said. “I think representation is really important, especially [on] Pride weekend.”

The 7th Annual Oklahoma City Burlesque Festival is June 21-22. Tickets are available for single days of the festival or as weekend passes that grant access to both days. Guests must be at least 18 years old to enter. 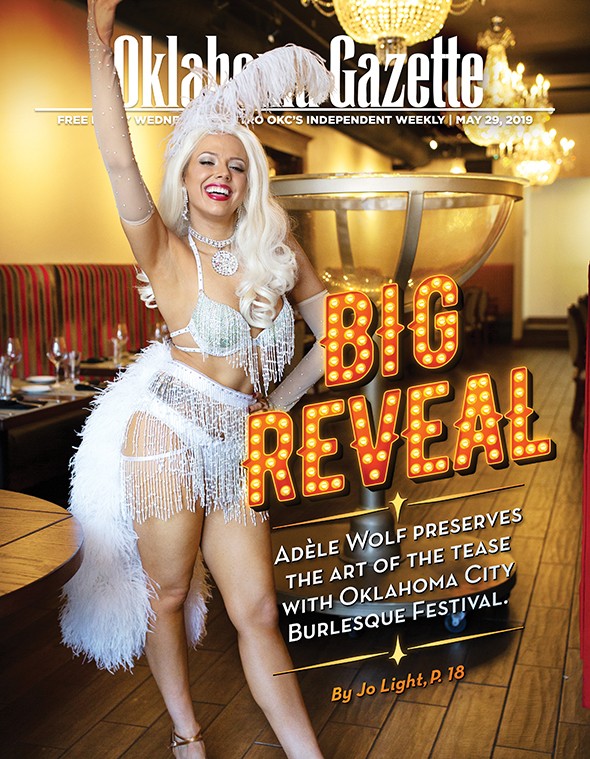