Cover: Fans share their stories as Lady Gaga returns to OKC for the first time in seven years 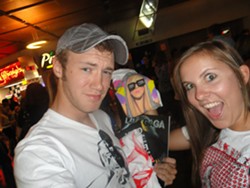 If there is one constant in Lady Gaga fandom, it’s that it is never boring.

Gaga, the global pop sensation and cultural icon born Stefani Germanotta, will soon be making her first visit to Oklahoma City since 2010’s The Monster Ball Tour, back when Chesapeake Energy Arena was known as the Ford Center. Her fiercely loyal fanbase patiently waited for her return, which is scheduled to begin 7:30 p.m. Dec. 9 at the redubbed arena, 100 W. Reno Ave.

The pop star entered the public consciousness known as much for her wild outfits and stage antics as her music, though the many fans that fell for albums like 2008’s The Fame (later reissued as The Fame Monster in 2009) and 2011’s Born This Way loved her lyrical message of acceptance and love.

But Gaga’s image has become more refined in recent years. She released the collaborative album Cheek to Cheek with Tony Bennett in 2014, impressing many with her eloquent jazz vocals. Her most recent studio album, 2016’s Joanne, is a sonically stripped-down release as close to a singer-songwriter album as most mega pop stars can manage. And, of course, she was seen by millions as the halftime entertainment for Super Bowl LI in February.

It will be interesting to see where Gaga’s career arc goes from here. Will she continue to refine her image and music or move back to the style of her Born This Way peak? Knowing Gaga, it is likely that she could present a version of herself audiences have yet to see.

Whatever the case might be, the artist has accumulated a legion of loyal fans who will be there to support her, in large part because she has always been there to support them. Oklahoma Gazette recently gathered fan accounts from several locals who all credit Gaga as a true inspiration.

For a time, Jacob Abello would not even consider leaving the house unless he looked a certain way. One summer, he wore all black and carried an umbrella.

Prettyboy, the name Abello performs under for his art-pop solo project, was not necessarily inspired by Lady Gaga, but it was certainly informed by her style and pageantry.

“The allure really came from her insistence that performing really was a lifestyle,” he said. “Her art extended past the stage and the record and the music and her performances even. Anytime she was in public, she was a performer.”

Abello began his career as a folk-rock singer-songwriter but fully evolved into Prettyboy with the release of his album Nothing But Gold in 2009. He had wanted to take his music in a more synthy, eccentric direction before he even knew who Gaga was, but discovering her larger-than-life character did help Abello flesh out the rest of his Prettyboy persona.

He remembers one of his biggest shows at the second Norman Music Festival.

“It was totally Gaga,” he said. “I had dancers; there was a lot of Catholic imagery.”

These days, Abello is going to school, finishing up his undergraduate studies in political science and possibly headed to law school after that. He is scheduled to release his long-anticipated new Prettyboy album sometime in 2018.

It is unlikely that Abello will ever be as famous as Gaga, and he is OK with that. But for a few years, within his local sphere of influence, Abello was a highly recognized and regarded figure. With that in mind, it is no wonder Abello latched onto the pop star’s theatrical critique of fame. It’s a world and lifestyle he had once embraced.

“For that short time in my life, it’s probably the most famous I might ever be,” he said. “I got to kind of live in her world a little bit, so it was really fun.”

It was not the first time Madison Ewald and her friend Meredith Eldridge had prepared a gift for Lady Gaga, but it was the most memorable.

Gaga often designates a time during her concerts when fans can throw gifts for her up on stage. Ewald and Eldridge, longtime friends who met while growing up in Fairview, always work to prepare something for their favorite pop star, including for her July 2014 Dallas concert in support of the album Artpop.

When the time was finally right to throw the gifts, Ewald and Eldridge enlisted the help of a man a few rows in front of them, who was able to chuck their Hello Kitty doll and attached letter directly in front of the singer.

The gift immediately caught Gaga’s attention. She opened the letter and began reading it on stage. A video of the moment titled Gaga Reads Letter From Fans in Dallas can be seen on YouTube.

The short letter, which the friends gave the title “Hopelessly Devoted,” begins, “We are Meredith and Madison. We are from a small town in Oklahoma that only has two stoplights. We have always had an affinity for the avant-garde but struggle with a way to express it, especially in such a conservative community.”

The letter goes on to thank Gaga for her music and the way she uses her platform to promote a message of love and acceptance. Ewald and Eldridge are both crying throughout the reading. The pop star was clearly moved too and invited them to meet her backstage after reading the letter in front of a packed house.

“I would really love to thank you in person, if that’s OK,” she said onstage.

Someone with Gaga’s team rushed to their location in the crowd and told them where to go after the show. After the show, while waiting to meet Gaga, Ewald tried hard to keep composed.

“The one thing I did not want to do was cry because she doesn’t like it when people freak out when they meet her,” she said.

Ewald remembers telling the pop star that she thought the concert was the best Gaga show she had attended. She remembers seeing the vocalist’s face light up with appreciation. Ewald said she thinks the compliment must have particularly registered with her, possibly because of Artpop’s lukewarm critical reception.

“I could tell it really mattered to her, what her fans thought and felt,” she said. “To really let her know that I was a fan and supported her was a cool experience.”

In 2008 at age 17, Nathan Hatcher already considered himself a music obsessive. But after hearing “Poker Face” at a friend’s house, he thrust himself into frenzy of research on his brand-new obsession.

“I hadn’t really discovered such a creative lyricist before,” he said. “I had to hear more, so I looked up ‘Paparazzi’ on YouTube and found a video of Gaga performing a live, acoustic version of the song. She was the real deal.”

His fascination reached a fever pitch during Gaga’s 2009 MTV Video Music Awards performance, one in which the artist theatrically “bled to death” in a pool of fake blood.

To Hatcher, Gaga encompasses a message of love, equality and acceptance. She is the one thing he seems to have in common with all of his friends, and he’s waiting excitedly for the upcoming show in Oklahoma City, his fourth Gaga show.

“Her music guided me out of my adolescence, and who she is continues to inspire me as an adult,” he said.

When Ethan Meiwes went to his first Lady Gaga concert at 16, he heard her say something that registered with him and stayed in his thoughts long after the massive, sold-out arena show ended. Today, those same words can be found tattooed on his shoulder.

Attending the Dallas concert of Gaga’s Monster Ball tour, Meiwes, who was raised in a family where it was taboo to be different, said he was in awe of how many people at the show were dressed up and distinct — letting their “freak flags fly.”

At some point in the show, Gaga said to her captive audience, “Even if the whole world gives up on you, you always have yourself.”

Meiwes said he was struggling at the time with questions of identity and self-acceptance, so to hear his favorite pop star say those words felt empowering. He never forgot the quote and, after turning 20, made it his first tattoo.

Meiwes publically came out as gay three years later. He had many fears that opening up to his family and others would lead to some rejection, but to his surprise, that was kept to a minimum. What he found instead was overwhelming acceptance.

If he had not ever heard of Gaga, Meiwes said he might still be closeted today.

“Hearing her message and seeing her following and knowing that there are other people like her — like me — it makes it OK,” he said.

As a past survivor of sexual assault, Sarah Neese finds strength in Gaga’s 2015 song “Til It Happens to You.”

Neese said many victims long to be comforted and shown by someone — anyone — that they are worthy of something greater than their assault.

“And yet, we’re met with doubt, closed doors and the misunderstanding of those who think ‘getting over it’ should be a destination and not a journey,” she said.

For Neese, Gaga was the voice of understanding for which she’d long been pining, and not just in regard to assault. Neese, like Gaga, was recently diagnosed with fibromyalgia, a chronic pain condition that affects women twice as often as it does men.

“I look at her honest struggle, and I’m inspired,” she said. “Inspired, because fibromyalgia does not discriminate between fame and anonymity. To her body, she is not Gaga; she is Stefani Germanotta. She’s on top of the world, and yet the very thing that plagues my body also plagues hers.”

Neese said seeing someone experiencing similar pain while still performing with such passion and on such a high level inspires her.

“It gives me hope that the pain that figuratively erodes my body will not erode my spirit,” she said. “I will not let those who do not understand my pain tell me what I should or should not feel.”

Print headline: 'Born' again; Lady Gaga is set to return to Oklahoma City for the first time in seven years. A mass of dedicated fans awaits her.