For trans or nonbinary people, explaining the fluidity of gender can be complicated.

Whether you think Facebook is a useful tool to keep up with your friends and current events or despise it as a data-mining tool of big corporations, you have to admit they got one thing right: the “it’s complicated” relationship status.

It is absurd to think the complexity of the human experience can be expressed using choices that fit on a drop-down menu. Slowly but surely, society at-large is catching on to this whole “it’s complicated” thing regarding how we see ourselves and those around us.

Take, for example, the transgender community.

We are just now beginning to see examples of transgender people in the public eye. “Call me Caitlyn,” the Vanity Fair cover featuring former Olympic athlete Caitlyn Jenner after her transition, ran July 2015, and Laverne Cox became the first openly transgender actress to be nominated for a primetime Emmy in 2014 for Orange Is the New Black. These are big steps forward in changing perception of gender from something black-and-white (or pink-and-blue, as it were) to something more reflective of the whole human experience.

I am transgender, meaning all these changes are not just abstract. When I first came out as transgender, I chose the label “nonbinary,” which is a broad term that refers to any gender aside from male or female. Lately though, I have started to doubt if I made the best choice, not because I feel male or female, but because it’s so difficult to translate that concept to those around me.

Society is still learning what it means to be transgender in the binary sense — going from male to female or vice versa — and adding the complexities and gray areas of genders besides male and female only serves to further complicate things.

Describing gender is complicated because there is not much choice of language when it comes to describing what leads people to change their gender presentation. The phrase “feels like a woman” trivializes the notion of gender, as though it were a choice or something done on a whim instead of something based in reason and reality.

But there is nothing that I “feel” that points me in the direction of male or female. Neither of those accurately describes me, but masculinity feels less uncomfortable to me because it does not come weighted with all the negative feelings and experiences I had throughout my childhood.

This leaves me in an exceptionally weird limbo because when I tell people I am not female, I have nothing else concrete or commonly understood to point to. It is incredibly hard to get people to buy into my otherness. In the absence of a clear male or female response, people tend to become overwhelmed by the unknown and revert back to classifying me as female.

In response to this, I have begun to lean more and more masculine in the way I present myself. I started with a haircut and a wardrobe change. Later, I changed my pronouns to they and them instead of she and her and my traditionally feminine birth name to the more gender-neutral Nikita so I could go by Nik if I wanted.

It will not become any easier unless people around me completely overhaul their thinking about gender. And that is a big ask. tweet this

After four years of living this way, it has become clear that this is not enough to convince people that I am not a woman. Though they might logically understand that I am not a woman, people often struggle with the underlying concept and revert back to the assumption that I am female. If they struggle with using they/them pronouns, the pronouns they fall back on are she/her. It does not matter how many times I tell people I do not feel any sort of femininity — it is the characteristic I am still defined by. The vast majority of people still address me with a feminine understanding. My own androgynous understanding of who I am simply does not extend to the people around me.

As a result, I have changed my strategy a little bit. I have stopped telling people I am nonbinary when I first meet them and started telling them I am a trans man instead. It is something easier to understand, and it lessens my dysphoria substantially. Instead of trying to use they/them pronouns with everyone I meet, I have included masculine pronouns as well. This means that people who rarely interact with me, like teachers I have never had or parents of my friends, have an easier time understanding. They do not have to completely overhaul their way of thinking for someone they talk to once every couple weeks.

In the long run, this does not do me or my fellow nonbinary people any favors. The only way to make they/them pronouns and nonbinary genders a societal norm is if they are used frequently and persistently. It will not become any easier unless people around me completely overhaul their thinking about gender.

And that is a big ask.

Applying for colleges, I found almost half had an “other” option when it came to gender. Unfortunately, these steps forward on paper are often the only ones available to me. Because gender is largely performative, much of the debate around the transgender community concerns identity in its most basic sense: whether your documents and other information show information consistent with who you are. But this progress on paper is hard to match in real-world scenarios. I and other trans people absolutely deserve the right to have the correct sex designations and pronouns in our documentation, but that is the easy part. Integrating this progress into society can present an almost insurmountable headwind.

Much of my life as a nonbinary person is spent trying to balance self-authenticity with practicality. The biggest stumbling block I have come across in my time transitioning is the sheer amount of time it takes to explain myself to someone. It is just not something I can do or do well in the given time frame. When you meet someone for the first time, you introduce yourself with your name and maybe one or two other things about you, like where you work or how you know of each other. This short time frame makes it feasibly impossible for me to tell everyone I interact with I am nonbinary. The fastest, most practical method I have come up with is the hardware-software analogy, and even that requires some prior understanding. If you take an iPhone and install Android software on it, it will function as an Android phone and vice versa, regardless of what it says on the back of the phone. This covers what it means to be trans in a binary sense, but I am often at a loss when it comes to explaining where I fall on the spectrum — and that is just exposing the other person to the information. In the years I have been doing this, I have never come across someone who understood immediately and did not have more questions.

I recently came across a book, She/He/They/Me: For the Sisters, Misters, and Binary Resisters by Robin Ryle, that offered some answers in unexpected ways. It is structured like a Choose Your Own Adventure book designed to describe the complexities of gender and what leads people to present themselves the way they do.

The first couple of steps were relatively straightforward: I live in a society with two genders where gender assignment happens at birth. I am raised as a girl in a patriarchal society, and my gender does not match the one I was assigned at birth.

At this point in following Ryle’s book, I hit a snag. I could turn to Chapter 18 and continue my path as a nonbinary person or I could continue as a trans man. I first turned to the nonbinary chapter but found I could only get a couple steps farther. The next chapter asked about my sexuality, something defined by your gender. This is a problem I had come across before: If I find women attractive, does that make me homo- or heterosexual? Because I do not define myself as a woman or a man, defining my sexuality becomes much more difficult. I ended up settling on the label “bisexual” because I am not entirely sure what my sexual orientation is yet, and partly to reduce confusion.

Ultimately, it did not matter. Whether I chose trans man, nonbinary, bisexual or otherwise, I ended up at the same question: “Are you married?” I have not even graduated high school yet, and I would like to take things a step at a time, thank you very much.

I ended up flipping through the book until I found a place I could continue: dating. From this point, the path begins to describe your adult life with categories like jobs, leisure and health care.

Just when I thought I had found the parts that were relevant to me, I discovered what I had been dealing with for the last four years. There was no way to continue as a nonbinary person. You could be a transgender male or female or a cisgender male or female. Nothing else.

Though I have cut a lot of feminine lifestyle choices out during my transition, I had really only briefly toyed with the idea of presenting as masculine instead of nonbinary. She/He/They/Me made me question that. As you can see, my nonbinary path is much shorter than my path as a trans man, and that is no accident. There is not a lot of space in this world for people who do not fit in the gender binary. 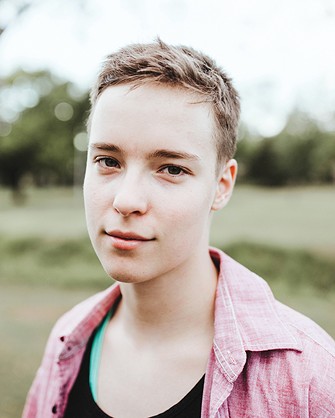 It feels to me like, despite my best efforts, my only two options remain male and female. This book, which is designed to teach about the area outside the binary, offered me no option to continue as a nonbinary person. Interestingly, I ended up fitting into the trans man pathway more than I thought I would. I am on testosterone, typically considered a “masculinizing” procedure, and in many other areas, such as sexuality, I found I was already operating under a masculine viewpoint anyway.

So here I stand, at a crossroads in many different ways. I am going to college in a month in a different country. I will be able to start with a clean slate and introduce myself however I want. Do I choose the nonbinary route and risk exposing myself to the same default-feminine assumptions I have been trying to erase, or do I take the easy way out as “just another guy” even though that does not truly represent me?

I would love to escape all the assumptions the people here in Oklahoma have built up through the years about who I am and just start fresh. I am seven months into my testosterone treatment, and my voice is beginning to drop into the masculine range. Now, instead of people assuming I am a woman or a 12-year-old boy who has not gone through puberty, they might assume I am a young man, and that is incredibly exciting for me. But by assuming a masculine identity, am I ignoring my responsibility to my community and society as a whole?

It is not going to get any easier for me to live as nonbinary if people like me do not step up and make themselves known. And on a more personal level, if I had known growing up that there were more than just two options — if I had known somebody who was nonbinary — I might have been able to transition earlier and save myself years of dysphoria.

These were questions that had been in my mind since I started transitioning, and even before, that I can no longer ignore. Unfortunately, the only answer I have come up with so far are the two words: “It’s complicated.” 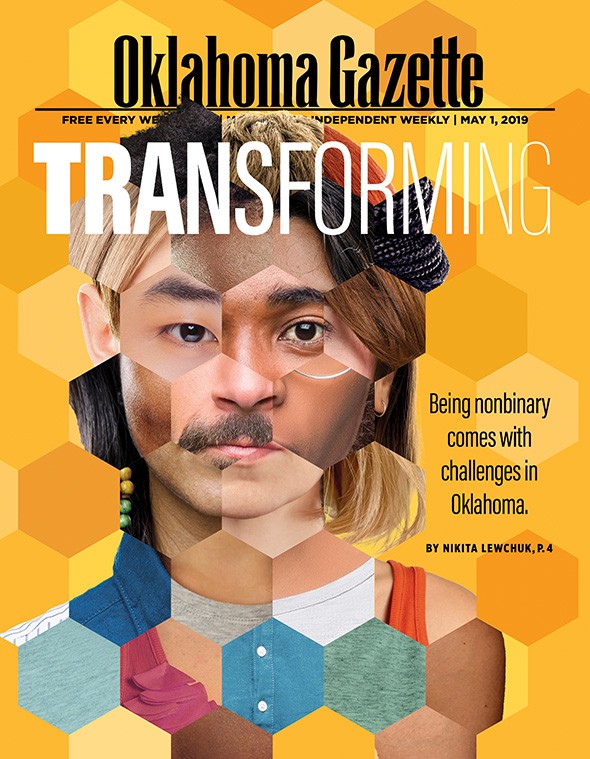