Van Gogh, Monet, Degas brings works by many of Europe’s most influential artists to OKCMOA. 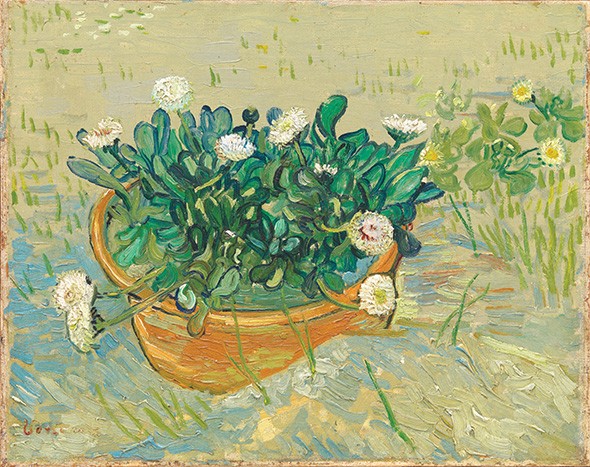 “You must in any case go to the museum often,” Van Gogh wrote. “It’s good to be acquainted with the old painters.”

Oklahoma City museumgoers will have the chance to become acquainted with works by many old painters at Van Gogh, Monet, Degas: The Mellon Collection of French Art from the Virginia Museum of Fine Arts, on view June 22-Sept. 22 at Oklahoma City Museum of Art (OKCMOA), 415 Couch Drive. As the name suggests, the exhibit includes paintings by Van Gogh, Claude Monet, Edgar Degas and many more highly influential European artists donated to Virginia Museum of Fine Arts (VMFA) by Paul Mellon and Rachel “Bunny” Lambert Mellon, who began collecting French art when they got married in 1948.

“What they were doing was really collecting art that reflected their interests or recalled happy memories,” said Jessica Provencher, assistant curator at OKCMOA. “It was very personal, and that was kind of radical for collectors at the time. ... They didn’t feel any urge to own a painting because it was a good investment or because the artist was important. … This is a pretty amazing collection with all the biggest names in French art, but that wasn’t the concern for them. They weren’t buying a Van Gogh because it was by Van Gogh. It was because these are flowers and Mrs. Mellon loves gardening.”

Rachel Mellon, who died in 2014 at age 103, redesigned the White House Rose Garden in 1962 as a favor to her friend Jacqueline Kennedy. Son of industrialist and secretary of the treasury Andrew Mellon, Paul Mellon, who died in 1999 at age 91, bred racehorses, including 1993 Kentucky Derby winner Sea Hero. The couple’s interests are reflected in many of the paintings in the exhibit, which are displayed according to subject matter. Along with straightforward categories such as horses, flowers and people, a few contextual categories offer further insight into the collection and its origins. Two paintings, Théodore Géricault’s “Mounted Jockey” from 1821 or 1822 and Berthe Morisot’s “Young Woman Watering a Shrub” from 1876, designated by VMFA curators as Cyphers of Modernity, are according to the exhibit catalogue “the most characteristic” of the collection, in both subject and size.

“A lot of the works, people might be a bit surprised to see that they’re kind of small,” Provenchar said, “and at the time, a lot of other collectors and institutions kind of had this belief that small works weren’t important. They were called ‘cyphers.’”

“Mounted Jockey” measures 14.5-by-18.5 inches, while “Young Woman Watering a Shrub” is 15.75-by-12.5 inches. Many of the paintings in the exhibit were once displayed in the Mellons’ home.

In Reflections in a Silver Spoon: A Memoir, Paul Mellon wrote, “Size has nothing to do with the quality or the importance of a work of art. … Small is beautiful.”

Morisot’s work is especially noteworthy, Provenchar said, because the artist herself is often overlooked.

“She hasn’t gotten as much recognition,” Provenchar said, “although she participated in seven of the eight Impressionist exhibitions, and she even organized one.”

According to the exhibit catalogue, published by VMFA, Morisot was restricted from conventional artistic training because she was a woman and her subject matter was also restricted by societal expectations: “Although Morisot was a respected member of the art world’s avant-garde, she was still held to her role as a woman. The household was her principal place of interaction and concern, and intimate, domestic scenes predominate her oeuvre.”

When viewing smaller pieces, Provenchar advised to “get as close as you can.”

“That way, you can see the texture, the brushstrokes,” she said. “Some of them are very detailed.”

To give visitors the best opportunity to view the paintings up close, the museum will be admitting a limited number of viewers in 15-minute increments. Time slots can be scheduled online, and viewing the exhibit takes an estimated time of one hour, though viewers can stay for as long as they like during museum hours.

“That way, it won’t ever be where you’re going in and there’s 100 other people in the gallery and you can’t see,” she said.

When looking at Van Gogh’s 1888 still life “Daisies, Arles,” which once hung in the Mellons’ bathroom, viewers can see the artist’s heavy, pronounced brushstrokes.

“He did go through periods where his painting was very thick — thick layers so you could see the paint coming off the canvas,” Provenchar said.

Van Gogh often discussed this style of painting, called impasto, in his letters, worrying over the cost of the paint he used and the lengthy and complex drying process, which he compared to the fermentation of “the strongest wine.” On Dec. 19, 1889, Van Gogh wrote to his younger brother Theo, indicating that he no longer wanted to use the method.

“I think it likely that I’ll do hardly any more things in impasto,” he wrote. “It’s the result of the calm life of seclusion I’m leading, and I feel I’m better for it. Fundamentally I’m not as violent as that, anyway I feel more myself in calmness.”

Two other Van Gogh paintings are included in the exhibit: “The Laundry Boat on the Seine at Asnières,” painted in 1887 while he stayed with his brother in Paris, and “The Wheat Field Behind St. Paul’s Hospital, St. Rémy,” painted in 1889 and depicting the view from his window at the mental hospital he admitted himself into. He committed suicide the following year. 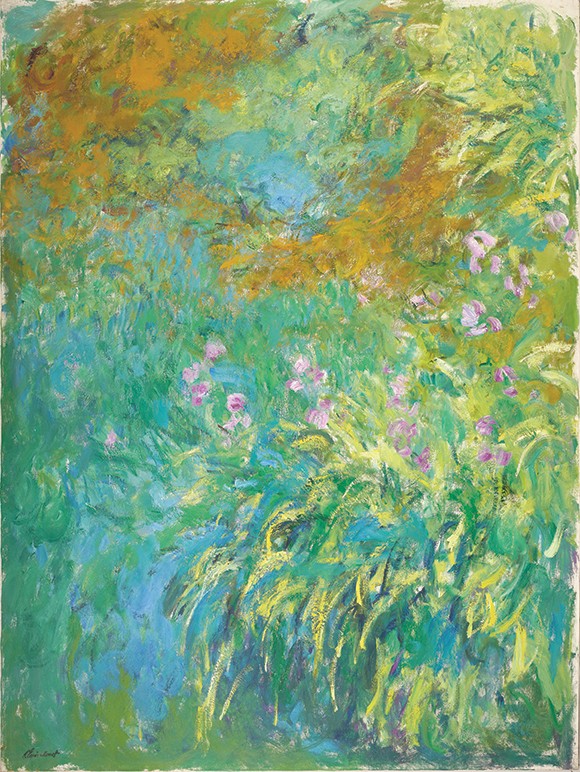 Provenchar said Monet’s “Field of Poppies, Giverny” from 1885 depicts the landscape surrounding the artist’s home and studio and might be the most well-known painting in the exhibit. “Camille at the Window, Argenteuil” from 1873, depicts his wife amid many colorful flowers and potted plants in an elaborate garden. Camille died in 1879 before Monet moved to Giverny and famously began painting the lilies in his water garden. His “Irises by the Pond,” painted sometime between 1914 and 1917, included in the exhibit, shows another kind of flower in the garden.

“Although it’s not exactly the water lilies, it’s kind of a reminder that there were other flowers around the pond,” Provenchar said.

Van Gogh, who expressed the desire to paint figures and portraits the way Monet painted landscapes, told Theo in a letter dated May 7, 1888, that he worried his own work “is pretty poor, in comparison.”

“At present I’m unhappy with myself and unhappy with what I’m doing, but I can glimpse some possibility of doing better in future,” he wrote.

This may have been what prompted Theo to tell their sister Willemien in a letter dated Dec. 6, 1888, that Monet “makes magnificent pictures of nature, but one has to be happy and healthy oneself to be able to enjoy them, otherwise one is likely to find oneself thinking ‘Oh if only I were there, I would be happier.’”

The exhibit includes several paintings and sculptures by Degas, many featuring horses, but two outliers in the collection might be most intriguing. The bronze cast of his sculpture “The Little Dancer, Aged Fourteen,” Provenchar said, “is probably the most famous work in the exhibition.” The original — modeled in colored wax, dressed in a cloth tutu and topped with real human hair — was  controversial for its unconventional materials and subject matter when Degas first exhibited it in 1881. His painting “At the Milliner,” dated between 1882 and 1885, meanwhile, is striking for its lack of detail. The subject, depicted from behind while trying on a hat in the mirror, has only a blank oval for a face in her reflection. 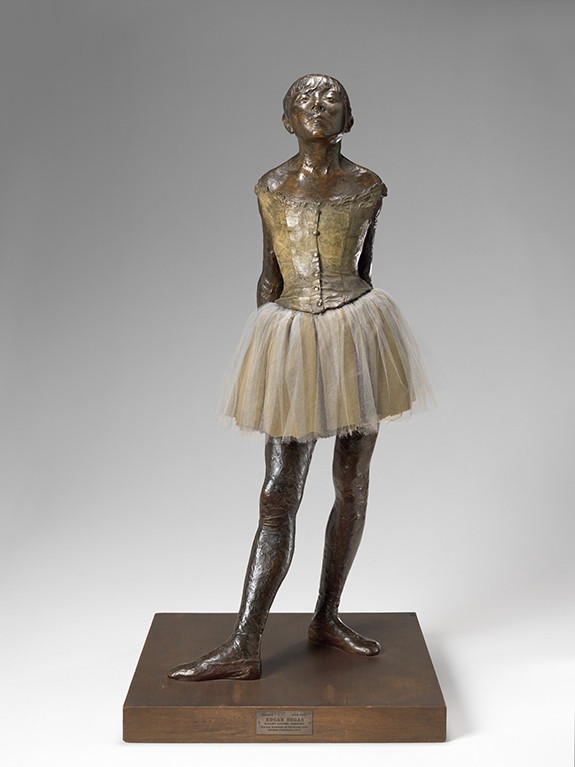 “A painting requires a little mystery, some vagueness, some fantasy,” the artist said in Pierre-George Jeanniot’s Memories of Degas. “When you always make your painting perfectly plain you end up boring people.”

In a letter to painter Emile Bernard dated Aug. 5, 1888, Van Gogh expressed a different theory about the Degas’ work.

“Degas lives like a little lawyer,” Van Gogh wrote of the former law student, “and he doesn’t like women, knowing that if he liked them and fucked them a lot he would become cerebrally ill and hopeless at painting. Degas’s painting is virile and impersonal precisely because he has resigned himself to being personally no more than a little lawyer, with a horror of riotous living.”

The exhibit, featuring more than 70 paintings and sculptures, also includes works by iconic Impressionist, Cubist, Romantic, Barbizon and Realist artists such as Paul Cézanne, Paul Gauguin, Édouard Manet, Henri Matisse, Pablo Picasso, Pierre-Auguste Renoir, Henri de Toulouse-Lautrec and more. OKCMOA’s director of marketing and communications Becky Weintz said the exhibit is characteristic of what visitors can expect to see at OKCMOA in the future following noteworthy exhibits such as Matisse in His Time: Masterworks of Modernism from the Centre Pompidou, Paris, which made its only North American stop in Oklahoma City in 2016, and Kehinde Wiley: A New Republic, which made its final tour stop here in 2017.

“Now that we’re doing more high-profile exhibitions as an institution, it’s making it easier for us to get really exciting exhibitions like this one,” Weintz said.

Tickets to the exhibit (including access to the rest of the museum) are $15. Several public exhibition tours are scheduled between now and Sept. 22 for $15-$25, and a public lecture about the exhibition is scheduled for 6 p.m. Aug. 14. Special viewings for museumgoers with babies and family-friendly events with arts and crafts activities for children are also planned.

“There’s a variety of ways that you can really engage with this exhibition, get more information, bring the family,” Weintz said, “so we’re definitely trying to really accommodate everyone. We think this is a once-in-a-lifetime opportunity for Oklahoma City residents, and we want as many people to come and experience it in as many different ways as possible.”