For Marcus Choi, playing George Washington in Hamilton: An American Musical is an opportunity and a responsibility. 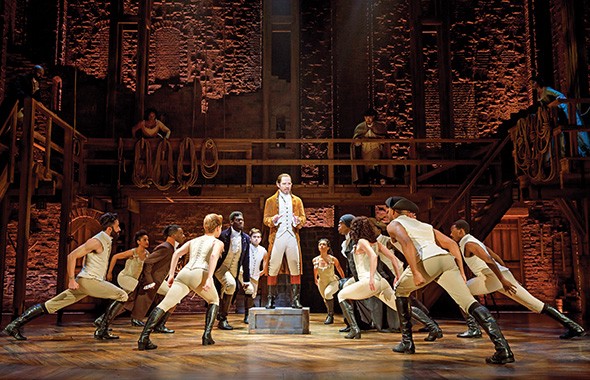 As part of the cast of a different Broadway musical opening the same year, Marcus Choi got a good idea of how popular Hamilton: An American Musical is.

“No other show mattered,” said Choi, who played Johnny Goto in Allegiance, a musical about the internment of Japanese-Americans during World War II, which closed in 2016 after 111 shows. “It was all about Hamilton; 2015 was the year of Hamilton. Every other show was just happy to be at the party.”

Now Choi plays George Washington in the touring production of Hamilton running July 30-Aug. 18 at Civic Center Music Hall’s Thelma Gaylord Performing Arts Theatre, 201 N. Walker Ave. He said he believes the show — written by Lin-Manuel Miranda and based on the life of Founding Father and first secretary of the U.S. Department of the Treasury Alexander Hamilton — is so popular because audiences have never seen or heard anything quite like it.

In a review that begins, “Yes, it really is that good,” New York Times theater critic Ben Brantley wrote, “I am loath to tell people to mortgage their houses and lease their children to acquire tickets to a hit Broadway show. But Hamilton … might just about be worth it — at least to anyone who wants proof that the American musical is not only surviving but also evolving in ways that should allow it to thrive and transmogrify in years to come.”

Choi — who previously appeared in Wicked, Sweet Charity and Miss Saigon — said he has never performed in anything similar to the historical sung-through hip-hop musical, but Miranda’s blending of disparate influences seems intuitive in retrospect.

“I’ve never done a hip-hop show,” Choi said. “I’ve never done a musical where I had to rap. Going into it, I guess, one of the things that I didn’t really realize was how much rap lends itself as a vehicle of storytelling. I grew up in the ’90s, and I was a huge fan of R&B and rap. I should have put two and two together because all the songs growing up, they were all narrative-driven songs. Biggie was one of the best storytellers. Tupac and all these rappers from the ’90s and even the ’80s, ‘Rapper’s Delight,’ and all these classic hip-hop songs told stories. Hamilton, I feel like if you were to strip away all the music, it’s just a very intense play, and it’s told in prose. It’s kind of like a Shakespearean play set to hip-hop music. In essence, I’ve never done a show like that.”

While Choi said the show’s music bears some similarity to patter songs by composer and lyricist Stephen Sondheim, learning to rap the complex lyrics based on Ron Chernow’s more than 800-page biography Alexander Hamilton was a challenge for a performer accustomed to more traditional musicals.

“I’m the best rapper in my car,” Choi said, laughing. “With the rap, it’s not a question of if you make a mistake; it’s a question of when you make a mistake. There’s so many words … a staggering number. They’re densely packed, and [musical supervisor] Alex Lacamoire really kind of broke everything down into rhythm and specificity of phrasing. It’s the most technically challenging show that I’ve ever been a part of.”

In an interview with Grantland, Miranda said that rapidly rapped lyrics were “the only way” to tell Hamilton’s full story, which follows the title character (played in this production by Joseph Morales) from his youth through his time as Washington’s “Right Hand Man” in the Revolutionary War to his co-authoring of the Federalist Papers encouraging the ratification of the U.S. Constitution, the Washington and Adams presidential administrations, the election of 1800 and his death in a duel with rival and former friend Aaron Burr (played by Nik Walker).

“You could do a Les Mis–type musical about Hamilton, but it would have to be 12 hours long because the amount of words on the bars when you’re writing a typical song — that’s maybe got 10 words per line,” Miranda said. 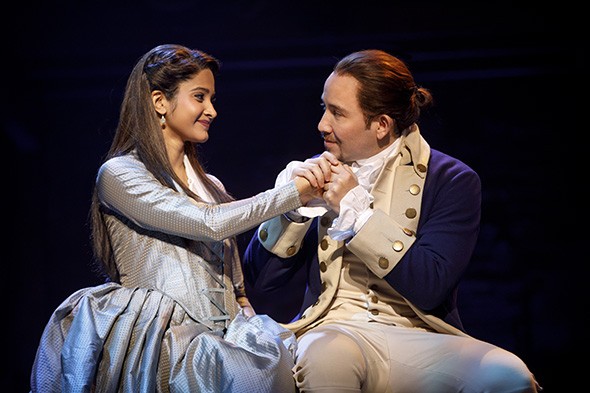 FiveThirtyEight’s Leah Libresco counted more than 20,000 words in the lyrics in Hamilton’s two-hour-and-23-minute original Broadway cast recording — an average of 144 words per minute — but Choi said he knows how important those words are to Hamilton fans, many of whom listen to the soundtrack on repeat but have not yet had an opportunity to see the show. He was once in the same category.

“I don’t think it’s necessarily pressure that we feel, going to these cities where people haven’t had the opportunity to go to New York or Chicago and see this show that they fell in love with,” Choi said, “but there’s certainly a responsibility to just kind of bring it every night, and really kind of put on the best show possible for people who have paid a lot of money to see this piece that they hold so dearly and have such a connection to.”

Though the cast wants to give the audience the caliber of performance they expect, Choi said Lacamoire and director Thomas Kail encouraged the touring performers to make the production their own.

“They’ve definitely instilled in us the freedom to find our own path through the narrative because, by default, there’s absolutely no way that I can do what [original Washington] Chris Jackson did,” Choi said. “I’m not Chris Jackson, so it’s really nice that they don’t put that expectation on you. I think it would be a disservice to the actor if they did that, so they give us the freedom to find our own moments and carve our own path through the show. And when people see that, I think they enjoy it,because even though it’s the same show that they know, it’s a different take. A lot of times people get so locked into what they heard on the album, that even when we were learning it, Alex would remind us not to do what the recording did because they recorded it as an album, not as a live show. So as far as making it our own, I don’t want to say it was easy, but it wasn’t as bad of an experience as one might think.”

Jackson’s portrayal of Washington might have set a challenging precedent for the supporting role, but the first president of the United States and “Father of His Country” has been revered as an almost superhuman character since at least the 1750s. According to an article on the website for Washington’s home Mount Vernon, the Founding Father had “two horses shot out from under him and four bullet holes shot through his coat” at the Battle of the Monongahela during the French and Indian War in 1755, and during the American Revolution at the Battle of Princeton in 1777, he risked his life to lead troops to a decisive victory: “Despite the widespread fears that he would be shot down at any moment, Washington was heard to say to his troops, ‘Parade with me, my fine fellows, we will have them soon!’”

“He became a bit of a mythical figure, where people thought that Washington was kind of larger than life,” Choi said. “Maybe this is the wrong way of putting it, but kind of like a supernatural Jesus type where he could escape death. I think that just kind of lends itself to his story and why people loved him so much and followed him so much.” 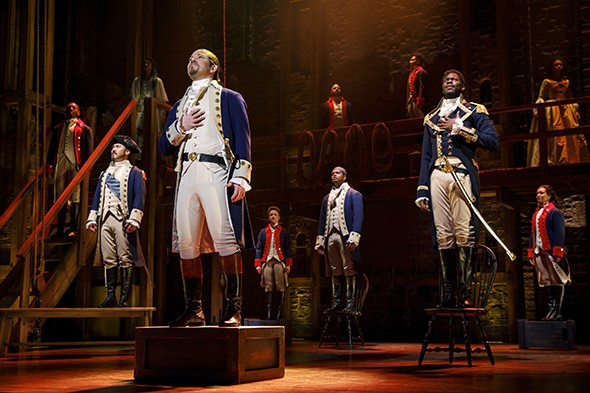 Or, as Washington raps in “Right Hand Man,” “I’m the model of a modern major general/The venerated Virginian veteran whose men are all/Lining up to put me up on a pedestal.”

One of the challenges of the role, Choi said, is portraying a mythic figure as a mortal man.

“I think I try to bring the humanity to it,” Choi said. “For me, I think the most important thing is maintaining the integrity of who he was, and it’s a challenge any way you look at it. Washington, at the end of the day, was a person, and I think that it’s important to show that he did struggle with the responsibility and the choices that he made and the failures in battle and how it took a toll on him.”

While the musical is based on America’s past, Choi said the themes it explores and its unconventional multicultural recasting of the Founding Fathers and their contemporaries resonate in the present day.

“It’s definitely a historical piece, but there are so many correlations with what’s happening in the country right now,” Choi said. “The design of the show, I think is very intentional, with immigrants telling the story and people of color playing these characters.”

Or, as Hamilton raps in “Yorktown (The World Turned Upside Down)”: “Finally on the field/We’ve had quite a run/Immigrants, we get the job done.”