Black Americans continue to be overrepresented in the local and national homeless population.

by Nathan Poppe for Curbside Chronicle 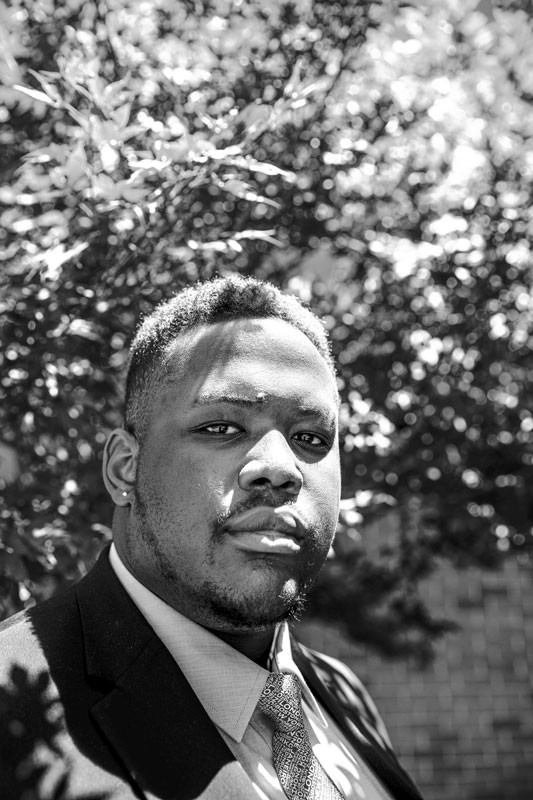 Dominique Gray lost his safety net at 17. He was sleeping outside of the Ralph Ellison Library in Oklahoma City. Beneath the book drop. For a full year, he experienced homelessness until a librarian connected him to a pathway home. How had things gotten so severe?

Bouts of depression, constant bullying and fights at school culminated with his mom kicking him out of the house. Before that, Dominique survived an abusive foster family. He remains estranged from his biological father. Growing up poor in a single-family household with five brothers, his hardships were frequent. But homelessness made Dominique feel like the world was against him.

“I didn’t want to be here anymore,” he said. “That’s tough to even say. In my head, I knew I wanted to learn. I wanted to get somewhere in life. I felt like people just didn’t see that.”

Black Americans make up 15 percent of Oklahoma City’s population, but they are 26 percent of the homeless population. Roughly 11,000 OKC residents experience homelessness annually, according to the Homeless Management Information System.

This racial trend isn’t unique to our city. It’s a national disparity. Four out of every 10 Americans experiencing homelessness are Black, despite comprising only 13 percent of the U.S. population, according to the U.S. Department of Housing and Urban Development.

Now 22, Dominique has finished high school. Life is better. He ended his street homelessness and recently received his first promotion working at the Will Rogers Airport. His sights are set on OSU-OKC. Dominique wants to become a paramedic.
But rebuilding one’s life is a delicate process. When COVID-19 impacted his work schedule, Dominique moved out of his apartment after living there for more than a year. He now relies on a support system of friends and his church community for a temporary place to stay. Until recently, Dominique depended on Uber to drive him to work, a daily cost of $20.

That amount doubled if a co-worker couldn’t bring him home.

“I wanted to go to school during this time but, you know, the pandemic,” Dominique said. “So, it’s kind of changing the game a little bit. I’m building up financially. I just bought a used car and already paid it off. I’d like to save up for my own place again.”

There is no single cause, or convenient fix, for homelessness. And the issue isn’t color blind. The odds are against Black Oklahomans.

Meghan Mueller works as the director of community capacity building at the Homeless Alliance and identifies individual circumstances, systemic failures and structural factors as the root of homelessness. She said it’s oversimplifying to attribute homelessness to substance abuse or domestic violence because most individual factors don’t impact everyone equally.

Same goes for systemic failures which occur when safety nets fail — think aging out of foster care or someone getting discharged from jail with nowhere to live. Structural factors are large-scale societal issues like the cost of living, healthcare or racism.

“Black Americans are disproportionately impacted by a myriad of social issues because of generations of trauma and oppression,” Meghan said. “You can’t look at individual homelessness without considering the entire picture.

“I think it is certainly a major concern for us as homeless service providers. When you look at the disparities in housing and health outcomes across the board, I think it is a crisis. These disparities will not go away without major reforms in a variety of systems.”

Although Oklahoma was still a young state in the aftermath of the Great Depression, the seeds of housing discrimination had been planted in the Sooner State. The evidence of inequality was painted on redlining maps.

In an attempt to gauge the riskiness of housing mortgages in the late 1930s, the U.S. government — through its own Home Owners’ Loan Corporation — created color-coded maps. The term redlining was born from neighborhoods with non-White residents, commonly marked in red. For Oklahoma City, much of the east and south residential portions of the city were red and also labeled “hazardous.”

Ta-Nehisi Coates — in his essay “Case for Reparations” — detailed how Black families seeking a home were often forced to rely on predatory lenders when they couldn’t access Federal Housing Administration-insured mortgages. Although Coates’ words focused on Chicago’s history, the practice commonly occurred in cities across the country.

“Neighborhoods where Black people lived … were usually considered ineligible for FHA backing,” he wrote. “Black people were viewed as a contagion. Redlining went beyond FHA-backed loans and spread to the entire mortgage industry, which was already rife with racism, excluding Black people from most legitimate means of obtaining a mortgage.”

Camille Landry is a community activist and owner of Nappy Roots Books, which is known for both retail and being a community center for northeast OKC residents. She has felt the impact of redlining for as long as she can remember. It’s obvious to anyone who’s lived it, she said.

When she used to flip houses throughout the city, Camille would always check to see if there was a clause in the property deed prohibiting a Black owner. There often was.

“I’m sitting here in a house, which according to the State of Oklahoma, it’s illegal for me to occupy,” she said. “Now those provisions were overturned … but that legacy of discrimination still exists. It’s still on the books.”

Another example can be seen in the ongoing lack of a grocery store on the eastside. Camille remembers discussions from 25 years ago aimed at fixing the problem. Black doctors, dentists and business leaders were interested in investing and Associated Wholesale Grocers was considering building a grocery store near the Oklahoma State Capitol. It ultimately fell through.

Camille was confused. She was hoping to represent other single mothers just wanting the same resources available in more affluent parts of town. She knew other members on this grocery store committee were better off financially and had business savvy, but she didn’t yet understand how they lacked the wealth to attract the store. So, she asked why it couldn’t be done independently.

Construction loans. Building costs. Freezers. Gas, sewer and electrical lines. Hiring and training a staff. Stocking an entire store. All that and more had to happen before the doors could open and a register made a sale.

“That’s what redlining does,” Camille said. “It removes the financial clout from my community that would enable the people who work hard, have business knowledge and are careful with their money. It’s not that they have any less money than the person who is a real estate developer, but they have the wrong skin tone to be able to go to a major bank and ask to develop a shopping center. Therefore, there still isn’t a grocery store in my neighborhood.”

Tony LeSure hasn’t experienced homelessness but currently feels the stress of living from paycheck to paycheck. The Oklahoma City native recently lost a telemarketing job and took a paycut at his new employer.

Tony went from making as much as $38 an hour to $13 an hour. He also used to be able to take mental health days when he felt stressed or overworked. Today, it’s much harder for that to happen. He said he simply can’t afford to miss a day of work.

“I know there are people who struggle with this,” Tony said. “They’re not OK. Yet, they have to keep pushing because the bills have to be paid. I feel your pain on that. I hate it for you. You’re not by yourself.”

Across the board, it’s becoming harder and harder for Oklahomans to meet their basic needs such as housing, food and transportation. According to Living Wage Calculator, a single adult living in the Oklahoma City metro needs to make $11.27 an hour to achieve a living wage.

Minimum wage has been frozen at $7.25 an hour in Oklahoma since 2009. A study by the Bureau of Labor Statistics concluded a Black worker is 50 percent more likely than a White worker to make minimum wage or less.

COVID-19 has further complicated wage gaps. The New York Times reported in June that less than half of Black adults in the U.S. now have a job due to pandemic shutdowns.
Financial hurdles persist even when incomes are combined under one roof. Black families with a new baby have a median household income of $36,300 while White families sit at $80,000, according to an analysis of 2018 census data by the Center on Poverty & Social Policy.

A need for justice

We’re living in a reality where 4 in 100 Black Oklahomans are housed in prisons and jails. The incarceration rate is five times higher for Black Oklahomans than for White, according to the Oklahoma Policy Institute.

In late 2019, Oklahoma officials made a concerted effort to release low-level offenders in the largest mass commutation in U.S. history. It only scratched the surface while a number of prisoners were released without housing arrangements. The Associated Press reported in January that the state’s prison population dropped below 25,000 for the first time in more than a decade, yet overcrowding persists.

Protests sparked by the murder of George Floyd have led to renewed criticisms of policing throughout the U.S. One figure hits especially close to home.

MappingPoliceViolence.org reported Oklahoma City police have killed 48 people since 2013. Twenty-four were Black. This is the second highest rate in the nation.

Oklahoma City Police Chief Wade Gourley was pressed on the topic during a June press conference, and he dismissed the existence of systemic issues in his department.

“I just don’t want folks making the assumption there are systemic problems here because there are not,” Gourley said.

“This is the start,” Cooper told The Frontier. “For decades, too many levels of government didn’t address mental health, domestic violence, generational poverty and cyclical violence. So, these proposals are just the start of the conversation about how we right those wrongs.”

Editor’s note: This article is part of a collaborative project about homelessness in Oklahoma City by The Curbside Chronicle, Oklahoma Gazette and Big If True. This project is funded through a grant by Inasmuch Foundation and Ethics & Excellence in Journalism Foundation facilitated by Center for Cooperative Media at Montclair State University. For other content in this series, visit thecurbsidechronicle.org, okgazette.com and bigiftrue.org.