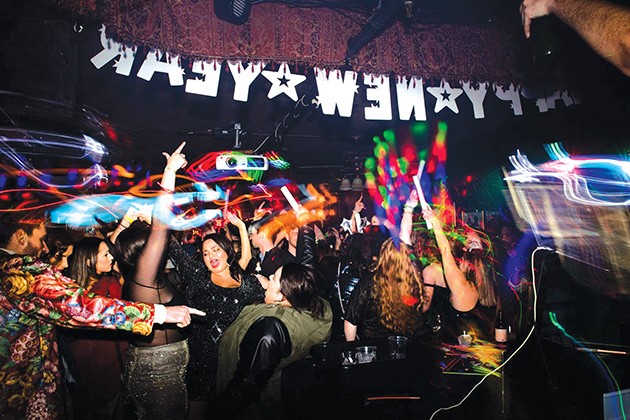 We’re miles away from the hustle and bustle (and record-breaking crowds of revelers) of Times Square, but from food halls to runways, listening rooms and barcades, the Oklahoma City metro has the perfect spot for everyone to ring in 2020. Cheers!

If The Purple One himself were still with us today, who’s to say he wouldn’t ring in the new year chugging PBR and playing Zaxxon? Enjoy a midnight champagne toast, party favors, music by DJ Reaper and, of course, an impressive selection of old-school arcade games while you pretend to still be mildly worried about Y2K. (Look it up.) Life is like a party, and this party is meant to last — until last call.

The Parlor OKC, the food hall located in Deep Deuce, wants to take care of all your New Year’s needs from food and drink to entertainment. There’s no cover to enter, but you can dine at one of its seven micro-kitchens with a $40 prepaid card that has a bonus $10 or an $80 card with a bonus of $20. Each guest over age 21 gets a complimentary glass of champagne upon entry. There will be live bands and a DJ playing music throughout the night that culminates with a $1000 balloon drop.

Newly renovated, recently reopened Angles invites you to party your way into a new decade New Year’s Eve. With more lights and lasers than before, owners promise you won’t want to miss a second of the countdown. Plus, if you don’t have any plans before nightfall but feel like getting ahead of the celebration, you can head in early, as the doors open at 3 p.m. on New Year’s Eve. Maybe pace yourself on the day drinking though, as you’ll likely want to stay there until the New Year’s party officially kicks off at 8 p.m.

New Tribe New Year: Dark Side of the Moon

In 2020, the Norman-bred psychedelic veterans in New Tribe plan to release a trilogy of albums with a corresponding video series, but as the band plays OKC out of the auld lang syne in the waning hours of 2019, its second set will be devoted to Pink Floyd’s prismatic perennial classic rock cash cow. The weird kid in homeroom swears this New Year’s party totally syncs up to The Wizard of Oz.

NYE with The Imaginaries

Ring in the new year with the musical stylings of Norman-based husband and wife Shane Henry and Maggie McClure at Oklahoma City’s home to the largest selection of craft beer (along with cocktails and food). The duo is fresh from supporting Brian Setzer Orchestra, and you’ve probably heard some of their Christmas music, which has been licensed in Hallmark movies and played on the radio. Social Capital opened this year and is located directly west of Scissortail Park.

Ring in the new year with the Angry Scotsman at his downtown urban microbrewery, patio and taproom. Promising one of the best spots to view fireworks, Angry Scotsman Brewing celebrates the end of the decade starting at 8 p.m. With music from The Bottom of the Barrel 9 p.m. to midnight., Angry Scotsman will provide snacks to keep people energetic through the night. A complimentary midnight toast will be served — and don’t forget about the microbrewery’s broad selection of craft beers to keep you warm before the clock strikes midnight. The Angry Scotsman recommends getting there early to snag one of his limited party favors.

Oklahoma City’s only religion-themed bar hosts a mysterious masquerade ball that includes a music performance from the band Born in November. Entry is $20 per person or $30 to get dual entry into its neighbor FlashBack RetroPub. Tables are available for a $100 reservation for a group of four people. Table reservations include a bottle of champagne. Dress attire is cocktail, and there is no coat check available.

It’s about to be a new decade, but 51st Street Speakeasy wants to celebrate the hits of the past. Join its ’90s-’00s Dance Party and reminisce with hits from Cher, Mariah Carey, Britney Spears, Beyoncé, Dr. Dre, Justin Timberlake, Backstreet Boys, NSYNC and the best music videos of 2019. Expect Boozy Capri Suns and a ton of glow sticks while the Thunder game plays on a big screen. Free food is served buffet-style 6-8 p.m. There is a $5 cover after 8 p.m. and a $10 dollar cover after 10 p.m., but everyone gets a champagne toast at midnight. Consider getting there early, as the owners fully expect to hit capacity.

What could be more groovy, man, than flipping the calendar back a century and celebrating the return of the Roaring ’20s like Jay “The Great Groovemeister” Gatsby? This swingin’ shindig features party favors, dance music provided by DJ Steve Jackson and 1920s-themed décor. Costumes to match are encouraged but not required. Twenty-three skidoo, and all that jazz.